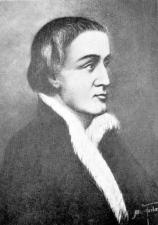 Paul de Chomedey, Sieur de Maisoneuve (1612-1676), was a French explorer and colonizer in Canada and the founder of Montreal. He also administered the settlement until it was taken over by a royal governor.

Paul de Chomedey de Maisoneuve was born in Champagne, the son of a prominent seigneur. After he had a short career in the army, his path crossed that of a group of French philanthropists and Jesuits who wanted to establish a missionary town in New France (Canada) to work for the conversion of the Native Americans. This group had founded the SociétéNotre-Dame de Montréal and were looking for a military-civilian leader who would direct the overseas operation. The society would recruit, finance, and buttress the proposed town in New France; Maisoneuve would lead it.

Maisoneuve arrived in Canada in the autumn of 1641, too late to do anything about a colony at Montreal that year. He used his time at Quebec to attempt to mitigate the antipathy to a colony at Montreal that prevailed in government circles there. The governor general of New France, Huault de Montmagny, offered Maisoneuve the Ile d'Orléans, a fine, rich island in the St. Lawrence within sight of Quebec. Maisoneuve, however, stuck to his guns: Montreal Island was what his group had been instructed to colonize, and Montreal was what it would be.

Thus in May 1642 Montreal was founded, deep in what can be thought of as Indian country, 150 miles upriver from Quebec, at the junction of two great rivers, the Ottawa and the St. Lawrence. Iroquois first appeared in the summer of 1643 and from then on harried the Montrealers continually by those most insidious and unnerving of techniques, stealth and ambush.

Maisoneuve was loath to attack the Native Americans until his forces were stronger, but his settlers were angry, and in March 1644 a sortie was made in which Maisoneuve, owing to the sudden desertion of his men, narrowly escaped death himself. He returned to France in 1645, coming back to Montreal in 1647. He was needed; the most serious problem was the threat implied in the devastating Iroquois attacks on the Jesuit missions in Huronia that began in 1648. (Huronia lay on the south side of Georgian Bay, in Lake Huron, some 400 miles west of Montreal.) Refugees drifted back to Montreal, and by 1651, with the Huron resistance almost wiped out and the French missions destroyed, Montreal was fairly in the battle line.

Maisoneuve went to France for financial and military relief, returning in 1653 with new settlers and soldiers supplied—as was much else in these years—by private energy and philanthropy. This reinforcement seems to have been the turning point in Montreal's fortunes. The settlers could now return to the fields around the village. A peace, though temporary, was patched up with the Iroquois in 1655. In 1663 the old Company of One Hundred Associates, the group that had been largely instrumental in making a colony of New France, was handed over to the Crown, and New France became a crown colony. The arrival of a royal governor, the Marquis de Tracy, with royal regiments in June 1665 marked the beginning of a new regime in New France and also marked the end of the regime of Maisoneuve. Strong-minded governors at Quebec had always been a little uncomfortable about Maisoneuve, and Tracy asked Maisoneuve to return to France on indefinite leave. He died in Paris.