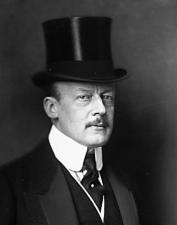 The Austro-Hungarian statesman Count Leopold von Berchtold (1863-1942) served as foreign minister of Austria-Hungary during the critical years 1912-1915. His uncompromising ultimatum to Serbia contributed to the outbreak of World War I.

Leopold von Berchtold, the son of a wealthy landowner in Moravia and Hungary, was born in Vienna on April 18, 1863. After some legal training, he entered the Austro-Hungarian foreign ministry in 1893; in the same year he married Countess Ferdinandine Károlyi, the daughter of one of the richest aristocrats in Hungary. After serving in Paris, London, and St. Petersburg, in 1906 he was named ambassador to Russia. He held this post until March 1911, when he became foreign minister.

Although Berchtold tried to maintain good relations with the Russian government while he was ambassador, the growing rivalry between the two powers over the Balkans undermined his efforts. As foreign minister of Austria-Hungary, Berchtold sought to strengthen the empire's shaky position in the Balkans. Initially he looked for a peaceful solution in agreement with the Triple Entente of England, France, and Russia. But the growing aggressiveness of South Slav (particularly Serbian) separatists, and Russia's increased efforts to eliminate Austria-Hungary's influence from the Balkans soon forced him to reconsider his position and to listen more attentively to Conrad von Hötzendorf's "war party."

Although honest and well-intentioned, Berchtold was essentially weak and indecisive. He was certainly not fit to handle the problems of his highly sensitive office in times of crisis. His limitations were evident in his vacillating policies during the Balkan Wars of 1912-1913. After this strife ended, Berchtold continued to be aware that Russian-supported South Slav separatism presented a great threat to the empire. Thus he decided to use the assassination in 1914 of the Austrian archduke Francis Ferdinand by a Serbian nationalist as a pretext for moving against Serbia, the major Slavic power in the Balkans. When his anti-Serbian campaign grew into a general war, he tried to persuade Italy and Romania to honor their treaty obligations. When Italy demanded compensation, however, he resigned (Jan. 13, 1915) rather than yield Austrian territory.

After the fall of Austria-Hungary, Berchtold lived in Vienna and on his Czech and Hungarian estates. He died on Nov. 21, 1942, in Hungary.