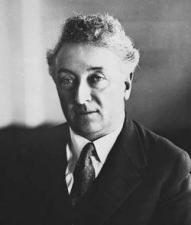 The Australian statesman Joseph Aloysius Lyons (1879-1939) was a Labour stalwart in Tasmania and later moved to the federal sphere just as the Depression took hold. As leader of the new United Australia party, he served as prime minister from 1932 to 1939.

The son of a farmer, Joseph Lyons was born in Stanley, Tasmania, on Sept. 15, 1879. At 17 he qualified as a teacher with the education department. He was an active advocate of educational reform, and in 1907 he resigned from his post to run for Tasmania's State Assembly as a Labour candidate dedicated to improvement of school facilities and the establishment of high schools.

In 1914 Lyons became minister for railways, minister for education, and state treasurer. Opposed to the raising of conscript forces for overseas service, he remained faithful to the Labour party when the state premier broke away to side with William Morris Hughes in 1915, and he moved up to leadership in Tasmania. After the election of 1923 Labour was the largest party (12 in a House of 30). As state premier, Lyons pursued cautious but constructive policies. The election of 1926 gave him a clear majority, and he legislated to encourage mining and the wood pulp industry. He initiated plans for expanding rural settlement and updated Tasmania's laws on labor conditions and social welfare.

Labour leader James Scullin encouraged Lyons to run for the Federal House of Representatives. Elected in 1929, Lyons immediately joined Scullin's new Cabinet. In the deepening financial crisis of 1930 he became acting treasurer but early in 1931 resigned from the Cabinet and was expelled from the Labour party. Political opponents at once accepted Lyons as the ablest leader of their cause, creating a new party—the United Australia party—around him. His honesty, political shrewdness, common sense, and humor were acknowledged assets.

Labour was quickly defeated (December 1931), and Lyons became prime minister and treasurer. His government was soon aided by improved returns from exports following devaluation, which, with higher tariffs, also sharply checked imports. The Ottawa Agreement (1932), consolidating British Commonwealth preferential trade, and new commodity marketing legislation were adopted. Unemployment remained at high levels, but in 1934 Lyons was returned. Holding fewer seats, he had to rely on a coalition with the Country party to remain in office. In 1935 he handed over the treasurership to Richard Gardiner Casey.

Lyons was reelected in 1937, and his government soon faced serious defense issues. After the 1937 Imperial Conference in London, heavy defense expenditure was pledged, and factional struggles were rending his Cabinet. Lyons died in Sydney on April 7, 1939. His widow, Dame Enid Lyons, remained actively associated with politics. In 1943 she became the first woman to be elected to the House of Representatives and in 1949 the first woman Cabinet member. She retired in 1951.

Enid Lyons, So We Take Comfort (1965), is a memoir by Lyons's widow. The political background to Lyons's career is explained in Leslie F. Crisp, The Australian Federal Labour Party, 1901-1951 (1955). His estrangement from Labour is covered in Warren E. Denning, Caucus Crisis: The Rise and Fall of the Scullin Government (1937). Political aspects of Lyons's administration are dealt with in Louise Overacker, The Australian Party System (1952), and Earle Page, Truant Surgeon: The Inside Story of Forty Years of Australian Political Life (1963). Economic factors are considered in E. O. G. Shann and D. B. Copland, The Crisis in Australian Finance, 1929 to 1931 (1931); and Lyons's handling of some of these financial problems is outlined in Douglas Copland, Australia in the World Crisis, 1929-1933 (1934). For general background on Australia's international relations in Lyons's time see H. V. Hodson, ed., The British Empire: A Report on Its Structure and Problems (1937; 2d ed. 1938). □