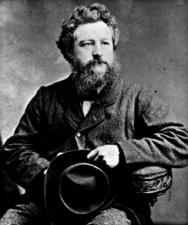 William Morris Hughes (1864-1952) was an English-born Australian statesman. Displaying political acumen and unbridled ambition, he rose through the rough and tumble of the labor movement and became prime minister at the age of 51.

The son of Welsh parents, William Morris Hughes was born in London on Sept. 25, 1864. He attended grammar schools and was teaching school before he emigrated to Sydney in 1884. Several years spent as an itinerant worker in country areas gave him a sound knowledge of the life of the underdog in the hinterland. Rural workers were being unionized, and Hughes returned to Sydney to organize maritime workers into a union, becoming its secretary.

Elected as a member of the New South Wales Legislative Assembly in 1894, Hughes supported federation and was a candidate for the House of Representatives in 1901, when the Commonwealth Constitution came into force. Having studied law, he took up legal practice in addition to his parliamentary duties.

Hughes was appointed minister for external affairs in the short-lived Labour ministry of John Watson (1904) and was attorney general under Andrew Fisher in 1908-1909, 1910-1913, and 1914. Hughes's stature had been enhanced by his forceful tract The Case for Labour (1910), but he was too prickly to gain the approval of most rank-and-file members, who feared his mercurial independence. Nevertheless, on Fisher's appointment as high commissioner in London, Hughes was chosen Labour party leader, and he became prime minister in October 1915. His ascendancy soon widened the growing rift between the parliamentary leadership and the party in general.

War disillusionment was already apparent. In spite of heavy Australian losses, the ill-starred Gallipoli campaign, begun with high hopes in April 1915, had achieved little, and a withdrawal was seen as inevitable. Long casualty lists had soured many to the war, and the labor movement was highly critical of the parliamentary leadership's abandonment of legislation for social betterment. Labour was in an uproar as Hughes left for England, at the invitation of the United Kingdom War Cabinet, in January 1916. In his absence Labour's anticonscription attitude hardened; party and trade union conferences declared uncompromising opposition, while extremist groups campaigned actively against the entire war effort.

Heavy British casualties in the Battle of the Somme convinced Hughes of the need to follow the United Kingdom's lead and introduce conscription, but his Cabinet generally did not favor this course. In a compromise move Hughes gained approval for a poll on the issue. After the enabling act was passed, overt opposition to the war flared among extremist groups, particularly in Sydney. The referendum held in October rejected Hughes's proposal, but the rift within the Labour party widened, and the party voted to expel him and others who supported him.

Hughes formed a new Cabinet and continued in office with Liberal party support. Early in 1917 his "National Labour" group and the Liberals merged as the Nationalist party; a general election returned the new party. Hughes intensified recruiting but did not push for conscription legislation, preferring instead to put the issue to a second referendum (December 1917). The campaign was even more vituperative than in 1916, but again the proposal was rejected.

Hughes was determined to claim a major voice in Pacific affairs for Australia. In London and in Washington he pressed for the postwar cession of former German island territories and enunciated an Australian "Monroe Doctrine." After gaining British Cabinet approval for his plan, he found that U.S. president Woodrow Wilson favored placing the former German colonies under League of Nations control. At the Versailles Peace Conference, Hughes agreed to accept a League mandate for German New Guinea (including the northern Solomons), with the safeguard of control over immigration into the territory. Hughes returned to Australia in August 1919 to a hero's welcome as the "Little Digger," a reference to his frail and gnomish physique.

However, the plethora of wartime controls affecting the lives of citizens had built up resentment, and when Hughes intervened directly in wage determination (by passing the Arbitration Court), popular support began to fade. His parliamentary majority was trimmed in 1920, and after the 1922 election the Nationalists could govern only with Country party support. In 1923 Hughes was replaced by Stanley Bruce.

Hughes remained in Parliament, a thorn in the side of both Labour and Nationalists. From the mid-1920s he became a brooding and cantankerous critic of Bruce's measures, and in 1929 he sided with Labour to defeat a bill designed to pass to the states responsibility for virtually all wage arbitration matters. Bruce and the Nationalists were defeated in the ensuing election; for his part in the debacle Hughes was expelled from the party.

When the United Australia party was formed from a merger of Labour breakaways and the Nationalists, Hughes joined it. He became minister for repatriation and health (1934), and subsequently he became minister for external affairs (1934-1939). On the death of Joseph Lyons in April 1939, Hughes was a candidate for the prime ministership, but he was narrowly defeated for the party leadership by Robert Gordon Menzies, under whom he became minister for the navy and attorney general (1939-1941).

With the changeover to the Labour administration of John Curtin, Hughes continued his diligent support of the war effort and refused to withdraw from the Advisory War Council when his party instructed him to do so; again he was expelled. In 1944 he supported Labour in its appeal for wider federal powers. In 1945 Hughes was invited to join the new Liberal party, successor to the United Australia party. He remained a member of the House of Representatives until his death, Oct. 28, 1952, having held a seat in the House since federation.

The split within Labour is explored in V. G. Childe, How Labour Governs (1923; repr. 1966); Louise Overacker, The Australian Party System (1952); H. V. Evatt, Australian Labour Leader: The Story of W. A. Holman and the Labour Movement (1954); and D. W. Rawson, Labor in Vain?(1966). The rise of conservative opposition to Hughes is explained in U. R. Ellis, A History of the Australian Country Party (1963), and Earle Page, Truant Surgeon: The Inside Story of Forty Years of Australian Political Life (1963). Background on the parliamentary maneuvers involved in Hughes's replacement is in Frank C. Green, Servant of the House (1969).