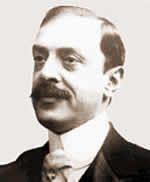 The Argentine international jurist and diplomat Luis María Drago (1859-1921) is known for the "Drago Doctrine," which held that international law did not authorize European powers to use armed intervention to force American republics to pay public debts.

Luis María Drago the son of Luis María Drago and Estela Sánchez Drago, was born on May 6, 1859, in Buenos Aires. After being educated by tutors and in private schools, he began to work for newspapers and to study at the university in 1875. In 1882 he completed a doctorate of laws, served briefly in the provincial legislature, and became a judge in the Buenos Aires civil and criminal courts. Later he published a pioneer study of penal problems.

In 1902 Drago was elected to the Chamber of Deputies, but almost immediately President Julio Roca appointed him minister of foreign relations. British and German fleets at that time were blockading Venezuela's coast to force payment of debts to their nationals. Drago's instructions to Argentina's representative in Washington declared that international law did not sanction intervention to compel sovereign republics to repay public indebtedness. This "Drago Doctrine" stemmed from an 1868 pronouncement by another Argentine jurist, Carlos Calvo, who had maintained that foreign creditors must seek recourse through domestic courts of countries where they lend money.

Elected again to the Chamber of Deputies in 1906, Drago soon resigned to serve on the International Court of Justice at The Hague. The next year the Court ratified a modified version of the Drago Doctrine, which had already been adopted by the 1906 Pan-American Conference. This doctrine has been credited with developing Pan-American unity against European intervention, thereby forestalling territorial acquisitions in the Western Hemisphere like those in Asia and Africa. However, the United States' increasing strength constituted the major bulwark against European imperialism.

Drago's minor role in the Venezuelan debt crisis and his significant International Court service earned worldwide respect. In 1909 the United States and Venezuela asked him to arbitrate a claims dispute. From 1910 to 1912 Drago, at the behest of Britain and the United States, arbitrated the North Atlantic fisheries dispute, and neither side questioned his decisions. In 1912 Columbia University awarded him an honorary doctorate for contributions to international peace; and the Carnegie Endowment for International Peace acclaimed him as "the highest exponent of the intellectual culture of South America." He served again in Argentina's Chamber of Deputies from 1912 to 1916. He died in Buenos Aires on June 9, 1921.

James Monroe , James Monroe Harry Ammon INAUGURATION day, 4 March 1817, was one of those rare late winter days in Washington with more than a hint of spring—sunny a… Judiciary , The branch of government that is endowed with the authority to interpret and apply the law, adjudicate legal disputes, and otherwise administer justi… Military Doctrine , Doctrine, Military Doctrine, Military. In any modern army's hierarchy of professional concerns, military doctrine is ranked near the top. Theoretical… Fairness Doctrine , The doctrine that imposes affirmative responsibilities on a broadcaster to provide coverage of issues of public importance that is adequate and fairl… Doctrine Of The Mean , Doctrine of the Mean. Eng. rendering of Chung Yung, one of the group of Four Books in the Confucian Classics. Like the Great Learning (Ta Hsüeh) it w… Doctrine Of Signatures , Doctrine of Signatures Doctrine of Signatures Doctrine of Signatures, the concept that the key to humanity's use of various plants was indicated by t…