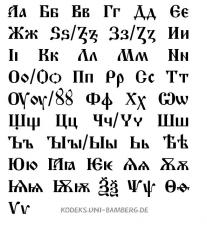 Church Slavonic, language belonging to the South Slavic group of the Slavic subfamily of the Indo-European family of languages (see Slavic languages). Although it is still the liturgical language of most branches of the Orthodox Eastern Church, Church Slavonic is extinct today as a spoken tongue. In its earliest period, from the 9th to 11th cent. AD, this language is variously termed Old Church Slavonic, Old Church Slavic, or Old Bulgarian. The year 1100 is the conventional dividing line between the ancestor, Old Church Slavonic, and its descendant, the later Church Slavonic, which flourished as the literary language of a number of Slavic peoples before the 18th cent. Old Church Slavonic was created in the 9th cent. by St. Cyril and St. Methodius for their translation of the Gospels and other religious texts. Scholars disagree as to which spoken Slavic dialect was chosen by the two saints as the basis for the language of their translations. In any case, because this dialect was inadequate for their purpose, they had to enrich and transform it, drawing on the vocabulary and syntax of Greek. Old Church Slavonic is the first Slavic language known to have been recorded in writing. Two alphabets were devised for it, the Glagolitic and the Cyrillic. Tradition makes St. Cyril the inventor of both, although this view has been questioned; and both alphabets are said to have been derived in part from the Greek. The earliest suriving documents in Old Church Slavonic date from the 10th and 11th cent. In time, as the South and East Slavic tongues influenced this literary language in their respective regions, three major forms of the later Church Slavonic arose: Bulgarian, Serbian, and Russian. For various historical reasons, Russian Church Slavonic eventually became the dominant form. The Western Slavs were not caught up in this development, since they came under the domination of the Roman Catholic Church after the 11th cent. At first employed for religious writings, Church Slavonic later came to be used in secular compositions as well. Today it is written in the Cyrillic alphabet.

Orthodoxy , Orthodoxy African Orthodox Church, Inc Albanian Orthodox Diocese of America American Carpatho-Russian Orthodox Greek Catholic Church American Exarcha… Brethren , Brethren Brethren Current address not obtained for this edition. The Association of Fundamental Gospel Churches was formed in 1954 by the coming toge… Lutheranism , Lutheranism, branch of Protestantism that arose as a result of the Reformation, whose religious faith is based on the principles of Martin Luther, al… Low Church , low church. As against the high-church view of the Church of England, low churchmen minimized continuity with the medieval past and the role of bisho… High Church , High Church is a term applied to the party within the Anglican Communion in general, and the Church of England in particular, that has sought to mini… Church Of England , Church of England, the established church of England and the mother church of the Anglican Communion. Organization and Doctrine The clergy of the chu…