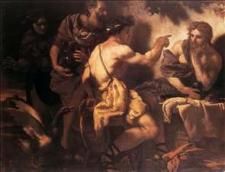 oxford
views updated
Baucis in a story told by Ovid, the wife of a good old countryman Philemon. They entertained the gods Zeus and Hermes as hospitably as their poverty allowed when the gods, who had visited the earth in disguise, were rejected by the rich. For this, the couple were saved from a flood which covered the district, and their dwelling was transformed into a temple of which they became the first priest and priestess. They were also granted their request to die at the same time, and were then turned into trees whose boughs intertwined.

Io , In Greek mythology, Io was a young woman who was loved by Zeus, king of the gods. His attentions toward her aroused the jealousy of his wife, Hera *,… Veda , Veda Veda (vā´də, vē´də) [Sanskrit,=knowledge, cognate with English wit, from a root meaning know], oldest scriptures of Hinduism and the most ancien… Brahma , Brahmā BRAHMĀ is the creator in Hindu mythology; sometimes he is said to form a trinity with Viṣṇu as preserver and Śiva as destroyer. Yet Brahmā doe… Apollo , Apollo Nationality/Culture Pronunciation Alternate Names Phoebus, Apulu (Etruscan) Appears In Homer's Iliad, Ovid's Metamorphoses, Hesiod's Theogony,… Varuna , Varuṇa VARUṆA replaced the earlier god Dyaus as the sky god in the Vedic pantheon, but early in his mythological career he became the god of the nigh… Panentheism , Panentheism, (Gr. παν, all; εν, in; θεος, God) in its simplest form, is the view that the world is in God, but God is not the world. In metaphysics,…