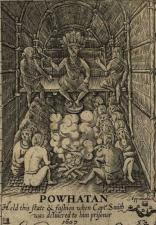 POWHATAN CONFEDERACY, a paramount chiefdom in the coastal plain of Virginia, named for its leader at the time of English colonization. Powhatan had inherited the leadership of a group of six tribes in the sixteenth century and expanded his authority to more than thirty tribes by 1607. Much of this expansion was by conquest. The Powhatans had a system of dual leadership with a "peace chief" responsible for internal affairs and a "war chief" for external affairs, including warfare. There was also a powerful council, which included priests and other advisers. Powhatan led the confederacy from before 1607 to 1617; after that the war chief Opechancanough was most visible, although a brother, Itoyatin, succeeded Powhatan as peace chief.

The region of the Powhatan Confederacy was called Tsenacommacah. Its core lay in the area between the James and Mattaponi Rivers in the inner coastal plain; other territories, each with its own chief and villages, were predominantly east of this area. All of these constituent chiefdoms paid tribute to Powhatan as paramount chief. To the north and south were other groups not part of the confederacy but culturally and linguistically similar. The geographic fall line running through modern Richmond, Virginia, constituted a western boundary across which were other groups speaking different languages; relatively little is known of those people.

The Powhatans lived in villages, many fortified, that could have over a thousand inhabitants, although most were a few hundred or smaller. The daily lives of villagers included farming, fishing, hunting, and gathering wild resources. Paralleling their political organization, Powhatan cosmology featured two powerful deities and a number of lesser spiritual powers. Powhatan males bonded with these manitus through the huskanaw, a vision-quest ritual, and their lives were shaped by the particular manitu with whom they shared a personal connection. Chiefs, priests, and curers had access to the most powerful manitus, but most Powhatans could personally draw on the spiritual realm; women had an innate spirituality related to their reproductive capacity.

The Powhatans were vital to the English Virginia colony in its early years. Cultural differences precluded understanding, and each saw the other as inferior, but for some years the Jamestown colony survived on food traded (or stolen) from the Powhatans. In the winter of 1607–1608, Powhatan attempted to adopt the English colony through the well-known ritual in which Powhatan's daughter Pocahontas symbolically saved Captain John Smith; in October 1608, the English tried to crown Powhatan as subordinate to their king.

Although the Powhatans tolerated the English for their desirable goods, throughout the first half of the seventeenth century they had to attempt violent corrections for what they saw as inappropriate actions by the colonists. The colonists also responded with violence to what they considered inappropriate actions by the Powhatans. The marriage of Pocahontas and John Rolfe in 1614 brought a measure of peace to the area, but Pocahontas died in early 1617 while visiting England. Led by Opechancanough, the Powhatans conducted large-scale attacks on the colony in 1622 and again in 1644; after the latter, Opechancanough was captured and killed. The 1646 treaty was signed by "king of the Indians" Necotowance, but by then Virginia was firmly controlled by the English and the Powhatans were dependent "tributary Indians" confined to designated reservations.

Through the eighteenth and nineteenth centuries, descendants of the Powhatan Indians remained in eastern Virginia, but they were relatively invisible—except for the descendants of Pocahontas, who were a proud part of white society. In the late nineteenth century, the Powhatans began the long struggle for recognition. The anthropologist Frank Speck promoted their cause beginning in 1919, and opposed racist policies directed against them. He aided a revival of the "Powhatan Confederacy" in the 1920s; another was attempted around 1970. While these reorganized confederacies did not last, individual tribes continued both on the two surviving reservations and in several other communities. Although they lacked federal recognition in the twenty-first century, most were recognized by the state of Virginia.

Pocahontas , Pocahontas was a Native American friend of the settlers at Jamestown, Virginia . She was the first Native American woman to marry an Englishman, John… Edmund Randolph , Died September 12, 1813 (Clark County, Virginia) Attorney general, secretary of state, governor Edmund Randolph was highly influential in the politic… Powhatan , c. 1548 Powhatan (present-day Richmond, Virginia) 1618 Powhatan Powhatan-Renapé leader " . . . Why should you destroy us, who have provided you with… John Rolfe , John Rolfe (1585-1622) was an English colonist who settled in Jamestown, Va., and pioneered in the cultivation of tobacco. John Rolfe was born in the… Sir Edwin Sandys , Sir Edwin Sandys (1561-1629), a great figure in the British Parliament during the turbulent first quarter of the 17th century, was important in the E… Sachem Of The Wampanoags Philip , Metacom Metacom (1640-1676) was a Native American chief (sachem) whose tribe, the Wampanoags, waged the most devastating war against the Engish in ea…