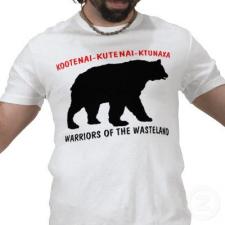 Kootenai (kōōt´ənā´), group of Native North Americans who in the 18th cent. occupied the so-called Kootenai country (i.e., N Montana, N Idaho, and SE British Columbia). Their language is thought by some scholars to form a branch of the Algonquian-Wakashan linguistic stock, although others argue that it has not been definitely related to any known linguistic family (see Native American languages). The Upper Kootenai lived near the headwaters of the Columbia River, and the Lower Kootenai lived on the Lower Kootenai River. According to tradition the Kootenai once lived E of the Rocky Mts., but they were driven westward by their enemies the Blackfoot. Kootenai culture was essentially that of the Plateau area, but after the advent of the horse the Kootenai adopted many Plains area traits including a seasonal buffalo hunt. Contact with whites began early in the 19th cent., when the North West Company established Rocky Mountain House on the upper Saskatchewan River. In 1807 the same company opened the first trading post in Kootenai country. The Kootenai are related to the Salish, with whom they share the Flathead Reservation in NW Montana. Another group of Kootenai live on a reservation in Idaho. In 1990 there were 750 Kootenai and about 2,300 people of mixed Salish and Kootenai descent in the United States, as well as some 500 Kootenai in Canada. Their name is sometimes spelled Kootenay or Kutenai.

Kootenai (kōō´tĬnā), river, 407 mi (655 km) long, rising in the Rocky Mts., SE British Columbia, Canada. It flows S into NW Montana, NW through N Idaho, then N into Canada. There it flows through Kootenay Lake (64 mi/103 km long; 191 sq mi/495 sq km), an expansion of the river, before joining the Columbia River at Castlegar. The river is used to generate hydroelectricity. The Canadian name is spelled Kootenay.

Salish , Salish Salish, indigenous people of North America, also known as the Flathead, who in the early 19th cent. inhabited the Bitterroot River valley of W… Algonquin , Al·gon·quin / alˈgängk(w)ən/ (also Al·gon·kin) • n. 1. a member of a North American Indian people living in Canada along the Ottawa River and its tri… Fur Trade , fur trade, in American history. Trade in animal skins and pelts had gone on since antiquity, but reached its height in the wilderness of North Americ… Kansa , Kansa Kansa (kăn´sô), people whose language belongs to the Siouan branch of the Hokan-Siouan linguistic stock (see Native American languages), also k… Cayuse , Cayuse Cayuse (kīyōōs´), Native North Americans who formerly occupied parts of NE Oregon and SE Washington. They were closely associated with the Nez… Pennacook , Pennacook Pennacook (pĕn´əkŏŏk), group of Native North Americans of the Algonquian branch of the Algonquian-Wakashan linguistic stock (see Native Ame…