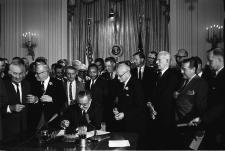 The Bill of Rights, (the first ten amendments to the Constitution) originally bound only the federal government, but after ratification of the fourteenth amendment portions of the Bill of Rights have also come to apply to state government. But for the over 550 American Indian nations currently recognized by the U.S. government, the Constitution and the Bill of Rights represent a social contract which was created without their representation long after their own social contracts. This is why, for example, federal courts had no power to try an Indian for a crime against another Indian on Indian land before the enactment of the Major Crimes Act.

EVENTS LEADING TO THE ACT

Historically, the idea of "rights" as something possessed by individuals and enforceable against governments is foreign to most tribal traditions. Traditional governments had established methods for dealing with disputes among individuals or disputes among clans, but an individual who was unhappy with a tribal decision had the choice of living with the decision or leaving the tribe. In modern times, leaving is no longer an option except in the sense of assimilating completely into the United States, away from the tribe. Intratribal disagreements have developed in recent years, such as friction between traditional religions and Christianity, or divisions over whether to operate casinos, and if so whether to serve alcohol and what to accomplish with the money, as well as environmental issues. The combination of these disagreements and dispute resolution tools unsuited to the modern world have led to many scandals in tribal governments and unfair treatment of dissenters by those tribal governments.

These competing values (the value of clean government and the value of self-government without outside interference) led to the Indian Civil Rights Act of 1968 (P.L. 90-284, 82 Stat. 77), which is designed to accomplish clean government by applying parts of the Bill of Rights to Indians against their own governments but also minimizes outside interference by limiting the remedy for a violation to a writ of habeas corpus in case the conferred rights are denied. A writ of habeas corpus in this context is an order to bring the person who claims his or her rights have been denied to federal court to decide whether the person's rights have in fact been denied. If the denial of rights is proven, the federal court orders a release from custody (jail).

What the Indian Civil Rights Act is best known for is extending part of the Bill of Rights to individual Indians against tribal governments. The parts of the Bill of Rights not included in this extension are those that would make no sense in the Indian government context. For example, the free exercise of religion is protected to account for the conflict between Christians and traditional religions where such conflict exists, but there is no ban on establishment of religion, since some tribes had traditional theocracies (government by religious leaders). The right to a lawyer in a criminal case is absent because lawyers are absent from many reservations.

The Second Amendment (right to keep and bear arms) is absent because whether to have gun control is left to tribal government except for weapons that are completely illegal to own off the reservation. The Third Amendment (quartering troops in private homes) does not apply because Indian tribes do not have professional armies, and the Tenth Amendment (reserving unenumerated powers to the states) does not apply because states have no power over Indian nations unless a particular power explicitly is conferred on states by Congress.

However, the Indian Civil Rights Acts goes farther than the language of the Bill of Rights in that it guarantees "equal protection of the law," something absent from the U.S. Constitution before the Fourteenth Amendment. It also denies tribal governments the power to pass ex post facto laws and bills of attainder, provisions that are contained in the main body of the U.S. Constitution rather than the Bill of Rights, and the power to imprison tribal members for a term greater than six months. Traditional tribal governments did not practice imprisonment at all.

The Indian Civil Rights Act of 1968 also contains provisions directing the Secretary of the Interior to create a model code for courts of Indian offenses (courts on reservations not created by the tribal government) and requiring consent by tribal governments before states can assume and criminal or civil jurisdiction over Indians on Indian land.

Wunder, John R. "Retained by the People": A History of American Indians and the Bill of Rights. New York: Oxford University Press, 1994.

No Indian tribe in exercising powers of self-government shall—

The privilege of the writ of habeas corpus shall be available to any person, in a court of the United States, to test the legality of his detention by order of an Indian tribe.

INDIAN CIVIL RIGHTS ACT (1968), 25 U.S.C. Secs. 1301 et seq., was passed by Congress in an attempt to impose upon tribal governments certain restrictions and protections afforded by the U.S. Constitution. This represented a significant intrusion by the federal government into the internal affairs of tribes.

The U.S. Supreme Court had long made clear that although Indian tribes were subject to the dominant plenary power of Congress and the general provisions of the Constitution, tribes were nonetheless not bound by the guarantee of individual rights found in the Fifth Amendment. The most important decision affirming this principle is Talton v. Mayes (1896). Subsequent Supreme Court decisions affirmed the line of reasoning that tribes were not arms of the federal government when punishing tribal members for criminal acts and that Indian tribes were exempt from many of the constitutional protections governing the actions of state and federal governments. In the 1960s, Congress sponsored a series of hearings on the conduct of tribal governments and heard testimony regarding the abuses that some tribal members were enduring at the hands of sometimes corrupt, incompetent, or tyrannical tribal officials. The Indian Civil Rights Act (ICRA) was enacted in response to these revelations.

The most important provisions of ICRA were those that guaranteed (1) the right to free speech, press, and assembly; (2) protection from unreasonable search and seizure; (3) the right of a criminal defendant to a speedy trial, to be advised of the charges, and to confront any adverse witnesses; (4) the right to hire an attorney in a criminal case; (5) protection against self incrimination; (6) protection against cruel and unusual punishment, excessive bail, incarceration of more than one year and/or a fine in excess of $5,000 for any one offense; (7) protection from double jeopardy or ex post facto laws; (8) the right to a trial by a jury for offenses punishable by imprisonment; and (9) equal protection under the law, and due process. ICRA also stipulated that the writ of habeas corpus would be available in tribal court.

While ICRA included many familiar constitutional protections, it either ignored or modified others. The law did not impose the establishment clause, the guarantee of a republican form of government, the requirement of a separation of church and state, the right to a jurytrial in civil cases, or the right of indigents to appointed counsel in criminal cases. Congress excluded these provisions because it recognized the unique political and cultural status of tribes.

The effects of the ICRA were substantial; by requiring tribes to meet certain standards, the law caused tribal judicial systems to mirror mainstream American courts and procedures. While the benefits to individual liberties were laudatory, the effect also homogenized tribal courts, and limited their sentencing powers.

In 1978, the Supreme Court dramatically limited the impact of ICRA in Santa Clara Pueblo v. Martinez. That case involved a request to prevent enforcement of a tribal ordinance denying tribal membership to children of female (but not male) members who marry outside the tribe. The petitioning mother claimed the ordinance discriminated against her child based upon sex and thus was a denial of equal protection and violated ICRA.

The Court held that tribal common-law sovereign immunity prevented a suit against the tribe. It concluded that Indian tribes are required to adhere to the substantial requirements of ICRA, but that in deference to tribal self-government, Congress did not intend for federal courts to oversee compliance with ICRA, except in habeas corpus proceedings or unusual circumstances. Since 1978 and Martinez, those persons who allege noncustodial violations of ICRA are limited to pursuing their claims in tribal forums. Generally federal courts play no enforcement role in any of the provisions of ICRA that don't involve the narrow review of the imposition of incarceration by tribal courts in criminal proceedings.

Proposals to amend the ICRA to provide for more effective enforcement by the federal courts have been made and remain controversial. However, any remedy must balance the rights of the individual tribal members with a respect for tribal sovereignty and self-government.

Indian Reorganization Act , INDIAN REORGANIZATION ACT. The Indian Reorganization Act (IRA) of 1934 represented a shift in U.S. Indian policy away from forced acculturation and a… Lochner V. New York , In Lochner v. New York, 198 U.S. 45, 25 S. Ct. 539, 49 L. Ed. 937 (1905), the U.S. Supreme Court struck down a state law restricting the hours employ… Slaughterhouse Cases , Slaughter-House Cases The U.S. Supreme Court ruling in the Slaughter-House cases, 83 U.S. (16 Wall.) 36, 21 L. Ed. 394 (1873), was the first High Cou… Civil Liberties , william blackstone described civil liberty as "the great end of all human society and government … that state in which each individual has the power… Menominee , MENOMINEE. The name of the Menominee tribe refers to the wild rice that grew in the tribe's homeland, 10 million acres in what is now eastern Wiscons… United States Supreme Court Decisions , The Cherokee nation, located in the state of Georgia, sought to remain on its territory and be viewed legally as an independent, sovereign nation. In…