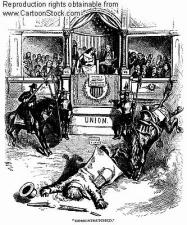 The Liberal Democratic Party of Russia (LDPR; known as the LDPSU during the last months of the Soviet period) was created in the spring of 1990, with active participation of the authorities and special services, as a controllable alternative to the growing democratic movement. In the 1991 presidential elections, the liberal democratic leader, the political clown Vladimir Zhirinovsky, won a surprising 6.2 million votes (7.8%) and took third place after victorious Boris Yeltsin and the main Communist candidate Nikolai Ryzhkov. In the 1993 Duma elections, the victories of the LDPR became a sensation; Zhirinovsky alone, capitalizing on sentiments of protest, secured 12.3 million votes (22.9%). From there the LDPR was able to advance five candidates in single-mandate districts. Such resounding success—both on the party list and in the districts—would not befall the LDPR again, although in 1994 and 1995 Zhirinovsky stirred up considerable energy for party formation in the provinces. In the 1995 elections, the LDPR registered candidates in 187 districts (more than the Communist Party of the Russian Federation, or KPRF) but received only one mandate and half its previous vote: 7.7 million votes (11.2%, second to the KPRF). In the 1996 presidential elections, Zhirinovsky received 4.3 million votes (5.7%, fifth place). The LDPR held approximately fifty seats in the Duma from 1996 to 1999 which helped repay, with interest, the resources invested earlier in the party's publicity since, with the domination of the left in the Duma, these votes were able to tip the scales in favor of government initiatives. The LDPR turned into an extremely profitable political business project.

In the 1999 elections, the Central Electoral Commission played a cruel joke on the Liberal Democrats. The LDPR list, consisting of a large number of commercial positions, filled by quasi-criminal businessmen, was not registered. On the very eve of the elections, when Zhirinovsky, hurriedly assembling another list and registering as the "Zhirinovsky Bloc," launched the advertising campaign "The Zhirinovsky Bloc Is the LDPR," the Central Electoral Commission registered the LDPR, but without Zhirinovsky. The Liberal Democrats were saved from this fatal split (LDPR without Zhirinovsky as a rival of the Zhirinovsky Bloc) only by the intervention of the Presidium of the Supreme Court. In the 1999 elections, the Zhirinovsky Bloc received 6 percent of the vote and finished fifth; half a year later, in the 2000 presidential elections, Zhirinovsky himself finished fourth with 2.7 percent. The LDPR fraction in the Duma from 2000 to 2003 was the smallest; it began with 17 delegates and ended with 13. It was headed by Zhirinovsky's son Igor Lebedev, as the party's head had become vice-speaker of the Duma.

Actively exploiting the nostalgia for national greatness (and for the USSR with its powerful army and special services, but without "Party nomenklatura"), "enlightened nationalism," and anti-Western sentiments; castigating the "radical reformers" and denouncing efforts at breaking the country both from without and within, the LDPR enjoys significant support from surviving groups and strata that do not share the communist ideology. The populist brightness, spiritedness, and outstanding political and acting abilities of Zhirinovsky play an important role, bringing him into sharp contrast with ordinary Russian politicians. The LDRP has especially strong support among the military and those Russian citizens who lived in Russia's national republics and SNG (Union of Independent States) countries among residents of bordering nations. The LDPR had its greatest success in regional elections from 1996 to 1998, when its candidates won as governor in Pskov oblast, mayor in the capital Tuva, parliament in Krasnodar Krai, and the Novosibirsk city assembly; a LDPR candidate came close to victory in the presidential elections in the Mari Republic as well. The LDPR results in the 1999–2002 term were significantly weaker, but with the expansion of NATO, the war in Iraq, and so forth, the LDPR ratings rose again. At its reregistration in April 2002, the LDPR declared nineteen thousand members and fifty-five regional branches.