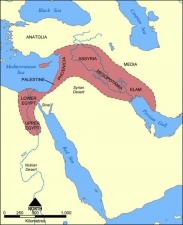 The term Fertile Crescent refers to part of the ancient Near East that has been considered to be the principal center for the emergence of agriculture, villages, and cities, and hence the “cradle of civilization.” The term was coined and popularized by James Henry Breasted (1865–1935), a scholar of ancient Egypt and director of the Oriental Institute at the University of Chicago, in his 1916 textbook for high school students, Ancient Times: A History of the Early World. As originally designated by Breasted, the Fertile Crescent is an arc or semicircle that included the relatively well-watered hilly areas of Palestine and Lebanon/western Syria (the Levant) on the west, stretching across northern Syria at the foot of the highland plateau of Anatolia, and then southward, east of the Tigris River to the foot of the Zagros Mountains in Iraq and Iran, ending in the alluvial plain created by the Tigris and Euphrates rivers southeast of contemporary Baghdad. As envisioned by Breasted, the Fertile Crescent’s arc surrounded hostile desert and acted as a fertile shore against this “Desert Bay” (the Syrian Desert). The first “ancient civilizations” emerged from this region, including the Sumerians at the head of the Persian Gulf; the Akkadians, Babylonians, and Assyrians in Mesopotamia (Iraq) between the two great rivers; and, at a later period, the Phoenicians on the west. Many of the earliest settlements and cities of the ancient world are found within this arc. The Fertile Crescent is sometimes mentioned in conjunction with ancient Egypt, since it is one of the first civilizations as well. In popular usage, the Fertile Crescent sometimes even incorporates ancient Egypt of the Nile Valley, although scholars have never accepted this wider usage. Many works on the archaeology or the lands of the Bible have also used the term Fertile Crescent (e.g., Magnusson 1977).

Besides being designated as the cradle of civilization, the Fertile Crescent has been postulated as the key area for the earlier Neolithic Revolution, the beginnings of agriculture and farming on the more generously rain-fed outer margins of the arc. In fact, whereas Breasted formulated the term mainly for the beginnings of cities and “civilization,” its usage for the region of the emergence of agriculture and villages has been much more common. Robert Braidwood’s (1907–2003) excavations from 1948 to 1955 at Jarmo, a site in northeastern Iraq in the foothills of the Zagros Mountains, began to provide botanical evidence for the first plant domestication occurring in the “hilly flanks,” and subsequent work has shown that the Fertile Crescent was indeed a focus for plant and animal domestication. Within this arc are found some of the earliest examples for the “founder crops” (Zohary 1996), such as the domesticated cereals of barley, emmer wheat, and einkorn wheat; the pulses of peas, chickpeas, lentils, and bitter vetch; and flax used as a fiber. Domesticated animals included goats, sheep, pigs, and cattle. The first evidence of cultivated crops begin to appear about 9000 BCE in the Levant, and by 6000 BCE villages, the farming of plants, and the use of domesticated animals were well established in many parts of the Fertile Crescent (and beyond in a few places). Horticulture began mainly in the Levant during the Chalcolithic period (5000–3500 BCE), which first focused on growing olives, figs, pomegranates, grapes, and dates (the latter perhaps first cultivated in other areas of the Near East). This core area for the Neolithic Revolution is somewhat larger than Breasted’s original concept. The argument for the Fertile Crescent’s central role has been popularized, for instance, by geographer and physiologist Jared Diamond in Guns, Germs, and Steel (1997), where he advocates the significance of the Mediterranean climate (wet winters, dry summers) and that most of the major plants and animals that were genetically and behaviorally predisposed to domestication were found basically together in parts of this arc. Diamond’s rather generalized Fertile Crescent extends more northward onto the Anatolian Plateau and includes a tongue that stretches westward to incorporate the significant circa 6000 BCE site of Çatal Hüyük on the Konya Plain in central Anatolia.

The name Fertile Crescent has been criticized for not being a proper term or even a relevant concept. In William Hallo and William Simpson’s 1998 edition of their textbook, The Ancient Near East: A History, they take the term to task, asserting that, in fact, the arc of the Fertile Crescent was not the area for the beginnings of agriculture (and the Neolithic Revolution), and that evidence now shows the origins to be also in highland areas, such as Anatolia, with greater rainfall and native vegetation. They (and others) also stress that many of the “civilizations” and cities that emerged in Mesopotamia could do so only after developing extensive irrigation systems (and hence these areas were not in a “fertile” region). On the other hand, different terms being proposed by some Near Eastern archaeologists also often refer to a semicircle for origins of agriculture and the emergence of cities, and actually cover a region similar to the Fertile Crescent, using such names as Near Eastern nuclear arc (Harlan 1977), Zagrosian arc (Maisels 1990), Zagros-Kurdi-Taurus mountain arc (Maisels 1990), or the Near East arc (Zohary and Hopf 1988). That many sites for early plant and animal domestication lie outside the Fertile Crescent may not necessarily entirely negate the importance of this core region for the beginnings of agriculture and farming, although further discoveries in Anatolia, Iran, and other areas (including India or China) may require significant reinterpretations or refinements in the future.

At the beginning of the twenty-first century, historians, political scientists, and others who deal with the contemporary Arab world and Middle East seldom use the term Fertile Crescent for the countries of the Levant. Scholars of the ancient Near East also generally refrain from using the term. Yet, the Fertile Crescent, as a simple explanation for the origins of agriculture, villages, cities, and “civilization,” is still used widely in the more popular literature, and with its long use by scholars in the past and its prominence in such works as Guns, Germs, and Steel, it is not a concept that will easily disappear from the literature or the imagination.

Magnusson, Magnus. 1977. BC: The Archaeology of the Bible Lands. London: Bodley Head and British Broadcasting Corporation.

Maisels, Charles Keith. 1990. The Emergence of Civilization: From Hunting and Gathering to Agriculture, Cities, and the State in the Near East. London: Routledge.

Zohary, Daniel, 1996. The Mode of Domestication of the Founder Crops of Southwest Asian Agriculture. In The Origins and Spread of Agriculture and Pastoralism in Eurasia, ed. David R. Harris, 142–158. London: University College London Press.

Zohary, Daniel, and Maria Hopf. 1988. Domestication of Plants in the Old World: The Origin and Spread of Cultivated Plants in West Asia, Europe, and the Nile Valley. 3rd ed. Oxford: Clarendon.

Term used by historians and prehistorians to describe the ancient Near East's agricultural heartland, which produced the Neolithic revolution and the rise of the world's first civilizations.

The Fertile Crescent stretches from the Mediterranean coast north across the Syrian Desert to Mesopotamia and then south to the Persian/Arabian Gulf. Parts of Egypt, Israel, Lebanon, Syria, Iraq, and Iran are within it.


The first civilization of Sumer and the civilizations of the Bible—Assyria, Akkad, Persia, and ancient Egypt, as well as the Jewish kingdoms of Judah and Israel—all developed in the Fertile Crescent, with cities, agricultural towns and villages, and herders of domesticated sheep and goats. Both ancient Greece and Rome invaded to control the richness of the region, and the Roman Empire continued through the Islamic conquests of the 700s, its Byzantine emperors ruling from Constantinople until the Ottoman Turks conquered the capital in 1453, making it their own capital of Istanbul.


Under the Ottoman Empire, the crescent had districts or provinces (vilayets) and subdistricts (sanjaks). After World War I, with the defeat of the Ottomans, Britain and France administered most of it under League of Nations mandates. Beginning in the 1920s, Arab leaders developed various plans for unifying it, and the Hashimites were especially eager to see it ruled by one of their amirs. After World War II, the concept of pan-Arabism was championed by Egypt's President Gamal Abdel Nasser and by the Baʿthist political parties of Iraq, Syria, and elsewhere. Today, Fertile Crescent unity is little talked about, but the Islamist political resurgence and the Organization of Petroleum Exporting Countries (OPEC) remind many that common interests and common heritage may yet serve to unite the Arab world, much of which now exists in the Fertile Crescent.