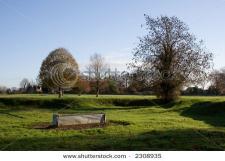 Common ownership of land, or a commons, is one of the most enduring social systems for owning and managing natural resources. Common land is controlled and managed by a defined group of people—tribes, peasants, and civic associations—for the collective benefit of its members.

This social regime of land management was the norm in prehistoric and medieval times, and it persists in the twenty-first century around the world, especially in developing countries. Even developed countries such as the United States have modern variants of common land, including land trusts, neighborhood-managed parks, and community-supported agriculture.

Common land stands in contrast to land owned as private property, in which individuals may possess the land and exclude others. It is also distinct from public land, in which government determines who may use the land and how, and from open access land, in which there are no property rights and no restrictions on how land may be used.

Collectively managed land has been a familiar socioeconomic institution in Latin America, Africa, Asia, India, and many developing nations for millennia. In societies with limited wealth and civil infrastructure, a commons provides an environmentally sustainable way to manage and allocate farmland, forests, water, wild game, and other natural resources. It also provides a certain measure of social equity in access and use of such resources. Community norms and sanctions tend to prevent anyone from abusing the land or appropriating more than his due share.

Since in a commons everyone is personally rooted to the land, there are keen incentives for responsible stewardship of resources. For this reason, common land systems tend to promote long-term sustainability over short-term productivity.

Since the 1990s a branch of political science and economics has studied the dynamics of “common-pool resources,” or CPRs. Much of the case literature focuses on the specific ways in which communities in developing nations manage shared natural resources. Professor Elinor Ostrom of Indiana University is widely credited with pioneering research into common-pool resources in the early 1990s. Much work in the field is associated with the Workshop on Political Theory and Policy Analysis at Indiana University and the International Association for the Study of Common Property. The Digital Library of the Commons is a major online repository of academic monographs and bibliographies about a wide variety of commons.

In Western societies, the classic embodiment of a common land regime is the commons of feudal England and Europe. In this system, a medieval baron or lord was involved in a dense web of reciprocal economic and social relationships with peasants. In return for giving military service, a portion of crops, and personal loyalty to the manor, peasants shared usage rights to the manor’s arable farmlands, pasture, and “waste” (forests, ponds, wetlands). Commoners might till their own individual strips of land, but no one had exclusive possession of the land or unrestricted freedom of use. Everyone’s usage of the land was dependent upon the needs of the rest of the community.

Although this medieval system of commons was quite stable and sustainable, it required plentiful supplies of labor, and was not especially efficient or open to innovation. The system began to experience serious pressures, therefore, when the Black Death of the fourteenth century killed millions of people, and in the fifteenth and sixteenth centuries, when peasants often left the manor for towns in order to become tradesmen and entrepreneurs.

Further pressures on the commons arose when the landed gentry of England saw the money-making potential of wool production and trade with Europe. Especially in the seventeenth and eighteenth centuries, the nobility persuaded Parliament to override the common law and authorize it to “enclose,” or privatize, the commons. This expropriation of common land cleared the way for a more efficient market use of common lands, and inaugurated the modern system of private property rights in land.

But the enclosures also caused enormous social disruptions and hardship as commoners were left to fend for themselves as landless, unskilled laborers. People whose lives were once nestled in stable, hierarchical communities that assured access to life-sustaining food, fuel, and household resources were thrust into a churning market order of shifting social roles and uncertain employment.

In response to the triumph of capitalism and the decline of the commons, many modern economists and policy experts have come to believe that land cannot be managed effectively as a shared resource. Perhaps the most notable statement to this effect was an acclaimed 1968 essay, “The Tragedy of the Commons,” by biologist Garrett Hardin. Hardin argued that people who share land as a commons will inevitably overexploit it. He cited the archetype of a common pasture to which anyone may add more livestock for grazing without restriction. In such circumstances, when individual farmers can reap private benefits from the commons without regard for its overall “carrying capacity,” a shared resource will be overexploited and fall into ruin, said Hardin. Hence, the “tragedy of the commons.”

The only solution to this tragedy, according to many economists, is to assign private property rights in land. Unlike commoners or government, it is argued, private landowners have the necessary incentives to take care of the land and make worthwhile investments in it. To support this general conclusion, neoclassical economists often cite “prisoner’s dilemma” game experiments that demonstrate the difficulties of getting individuals to cooperate to solve shared problems. In his influential book, The Logic of Collective Action (1965), economist Mancur Olson argued that “rational, self-interested individuals will not act to achieve their common or group interests” (p. 2). Drawing upon such analyses, a generation of economists and policy experts has denigrated common ownership of land as impractical.

Many critics, however, have challenged the tragedy of the commons narrative and prisoner’s dilemma experiments as unrealistic representations of real-world circumstances. They point out that social trust and communication are usually present in actual communities, and that these capacities can help groups overcome barriers to organizing collective-action solutions.

It has also been pointed out that the tragedy scenario that Hardin described is not, in fact, a commons, but rather a regime of unregulated open access. The land is “nonproperty” in the sense that no one has a recognized right to possess the land. There are no resource boundaries or governance rules, and anyone can appropriate whatever he or she wishes.

A commons, by contrast, is a system of governance and shared property rights for controlling access to and use of a resource. Successful commons generally have well defined boundaries, for example, and rules that are well understood by identifiable participants in the commons. The governance rules may be informal and implicit, and embodied in social traditions and norms, or they may be explicit and formally codified in law. In either case, there is a shared social understanding about who has rights to use the land’s resources and under what terms.

A commons regime depends critically upon socially enforced cooperation and the exclusion of outsiders. It also requires the ability to identify and punish “free riders” who try to use more than their allotted share of the land’s resources. With sufficient transparency in the commons, participants are able to prevent cheaters from taking more of the resource than they are entitled to under the social compact.

Collective management of land can have environmental advantages because it is more likely to treat the land as an organic ecosystem rather than a fungible commodity. A system of private property might divide the land into a collection of parcels, for example, perhaps resulting in the over-harvesting of timber in one plot of land that then leads to soil erosion or habitat destruction in an adjacent plot. But when commoners manage land holistically as an intact ecosystem, any abuse or overexploitation by individual users is likely to be identified and controlled.

Especially in poorer communities, collective management of lands can offer economic advantages. Villages and regional governments may find it expensive to maintain a system of courts, land titles, and private attorneys to manage individual property rights, and even fencing may be prohibitively expensive. Social rules and norms can serve as less expensive substitutes.

Others argue, however, that the lack of clear property rights in land is precisely what prevents poor people in developing countries from improving their economic lot. If peasants were more able to obtain clear and enforceable title in their land, for example, they would be able to use their land as collateral and participate more effectively in the market economy. Hernando de Soto makes this argument in his book The Mysteries of Capital (2000).

It is a mistake to regard systems of common land and private property as totally distinct and mutually exclusive. Private landowners are frequently restricted in the use of their lands by zoning ordinances, access easements, environmental laws, and other expressions of public needs and values. Conversely, unless a piece of land is managed communally, even commons can accommodate a certain measure of individual autonomy.

Ultimately, however, there is a fundamental, unbridgeable difference between a commons and a system of private property rights. In the latter, a person may sell and transfer individual ownership rights for cash. In a commons, by contrast, one cannot own the land as an individual nor alienate usage rights for commercial purposes. Usage rights are wrapped up in a web of particular social relationships, and cannot be bought and sold.

De Soto, Hernando, 2000. The Mysteries of Capital: Why Capitalism Triumphs in the West and Fails Everywhere Else. New York: Basic Books.

Digital Library of the Commons. http://dlc.dlib.indiana.edu.

An archaic designation of property set aside and regulated by the local, state, or federal government for the benefit of the public for recreational purposes.

Common lands established by the Federal government are known as public lands.