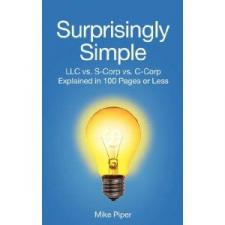 A small business may operate under various legal forms. The most common of these, particularly for new startups, is the sole proprietorship. The individual who owns the business receives all of its income and is responsible for all of the business's debts—including other liabilities to which the business may be subject (e.g. a customer slipping on that banana peel in the store). Under a sole proprietorship, the individual and the business are the same thing. If the business fails, the owner may have to sell his or her house and other goods to satisfy its debts. The principal advantage of incorporation is that the owner as a person is separated from the corporation, the latter viewed as an artificial "person." They are now two, not one. The corporation carries its own liabilities. When the corporation fails, the liability of its owners is limited to whatever they have invested—and no more. The business owner who started a business with $10,000 may lose the $10,000—but not the $300,000 he or she owns in other assets. The downside of incorporation is that the income of the corporation is taxed separately—and the owner gets his or her share only after the corporate tax has been deducted. The owner also then owes additional taxes on his or her earnings. Thus double taxation is involved. As a sole proprietor, the owner is taxed once but is personally exposed to all of the liabilities of the business. As a corporate entity, the owner is shielded from liabilities but is taxed twice. Is there a way to have the best of both worlds? Yes, there is. It is called the S Corporation.

The S corporation derives its name from Subchapter S of the Internal Revenue Code which provides corporations a "tax election" option—a choice on how they want to be taxed. Under Subchapter S, a company may elect to pass all of its profits to its shareholders directly. The shareholders are then responsible for paying taxes on this income stream. The corporation itself is not taxed. Meanwhile the limited liability benefits of the regular corporate form continue. Not all corporations, however, qualify for the Subchapter S tax election. The company may only have a maximum of 75 investors. They must all agree to this choice. All must be residents in the U.S. or U.S. citizens. The IRS also excludes certain types of companies described below. A regular corporation, called a C corporation, can convert itself to S status—and thus have it both ways.

Filing with the Internal Revenue Service

Once a business has incorporated in the usual way and has filed its articles of incorporation, it can elect S corporation status by filing Form 2553 with the IRS. All of the corporation's shareholders must sign this form or file special shareholder consent forms. The rules apply to anyone who has held stock in the company during the current tax year. To be eligible for S corporation status for the current tax year, a corporation must file the form by the fifteenth day of the third month of the corporation's tax year. Once the form has been filed, it is not necessary to file every year.

For a corporation to be eligible for S corporation status, the following conditions must be met and maintained:

Those businesses that are ineligible for S corporation status include:

The chief advantage of the S corporation is its treatment under the tax law, particularly if the company routinely pays high dividends. Under the C form, stockholders actually "feel" the double taxation of corporate profits only when they get dividends: under an S form, they would get more money. S corporation stockholders also get assigned losses if the company sustains them. These losses do not require stockholders to pay any money to the company but allow them to factor the reported losses into their own income taxes and thus reduce their taxes on other income.

Most healthy corporations reinvest all or substantial portions of their profits into operations to fund growth. Dividends paid are therefore just a portion of all profits. In C corporations, stockholders only pay taxes on dividends, year to year, and are not liable for taxes on the total profit made. But when the S corporation retains its profits for growth, stockholders must pay taxes on that profit even though they do not get a check in the mail—and the higher the profits, the more rapid the growth, the higher the taxes. This structural arrangement can thus produce tensions between stockholder and the corporation—stockholders either required to keep "investing" in a going concern indirectly by paying its taxes or, conversely, pressuring the corporation to distribute more of its profits and thus potentially slowing the company's growth.

S corporations are sanctioned under federal tax laws which may not be matched by local and state governments. Thus S corporations may still have to pay taxes as corporations to states and localities.

S corporations must act like S corporations and maintain careful records. This is not, per se, a disadvantage of the form: after all, all businesses should keep good records. But some business owners see the S corporation as merely one way to escape liabilities by gaining the benefits of limited liability while continuing to operate as sole proprietorships. Under prevailing law, a corporation (S or C) must adhere to regular forms: it must separate personal from corporate accounts, hold regular directors' and shareholders' meetings, take minutes, and also use the appropriate corporate designation on its documents and stationary. Failing to adhere to these requirements, the S corporation may not prevail in court in the case of a liability action, with the result that the stockholders are severally and individually held to be liable.

An S corporation may voluntarily revoke its status if it finds that S status is no longer beneficial; it may also lose the status involuntarily. In the first case, a majority of the stockholders is required to make the decision, and a simple notice to the IRS is all that is required. In the second case, any act which disqualifies the corporation's eligibility for S status will result in the termination of that status effective on the date that the infraction occurs. An example of such a disqualification would be acquiring a single foreign stockholder living abroad. In either case, the corporation becomes a C corporation in the absence of S corporation status.

Fishman, Stephen. Working for Yourself: Law and Taxes for Independent Contractors, Freelancers and Consultants. Nolo, 2004.

A type of corporation that is taxed under subchapter S of theinternal revenue code(26 U.S.C.A. § 1 et seq.).

An S corporation differs from a regular corporation in that it is not a separate taxable entity under the Internal Revenue Code. This means that the S corporation does not pay taxes on its net income. The net profits or losses of the corporation pass through to its owners.

An S corporation status is attractive to smaller, family-owned corporations that want to avoid double taxation: a tax on corporate income and a second tax on amounts distributed to shareholders. This status may also make financial sense if a new corporation is likely to have an operating loss in its first year. The losses from the business can be passed through to the individual shareholder's tax return and be used to offset income from other sources.

An S corporation also avoids audit issues that surround regularly taxed corporations, such as unreasonable compensation to office-shareholders. Finally, S status may avoid problems raised by corporate accounting rules and the corporate alternative minimum tax. These problems are eliminated because the income is taxed to the shareholders.

An S corporation can deduct the cost of employee benefits as a business expense. However, shareholders who own more than two percent of the stock are not considered employees for income tax purposes and their benefits may not be deducted. Tax advantages can be achieved in some cases because income can be shifted to other family members by making them employees or shareholders (or both) of the corporation.

Appreciation of the business also can be shifted to other family members as a way to minimize death taxes when an owner dies. When an S corporation is sold, the taxable gain on the business may be less than if it had been operated as a regular corporation.

Hupalo, Peter I. 2003. How to Start and Run Your Own Corporation: S-corporations for Small Business Owners. St. Paul, Minn,: West.

SUBSIDIARY , subsidiary •beery, bleary, cheery, dearie, dreary, Dun Laoghaire, eerie, eyrie (US aerie), Kashmiri, leery, peri, praemunire, query, smeary, teary, t… Tax Returns , Tax returns include all the required paperwork that accompanies the remittance of taxes to the appropriate government agencies, the largest of these… Automotive , Skip to main content Automotive AMERICAN MOTORS CORPORATION BAYERISCHE MOTOREN WERKE A.G. BENDLX CORPORATION CHRYSLER CORPORATION CUMMINS ENGINE CORP… Taxation , Governments need money so they can provide important services to their citizens. Such services can include national defense from foreign threats, pol… Tax Exemption , tax-ex·empt • adj. not liable or obligated to pay taxes: the foundation has applied for tax-exempt status. ∎ bearing interest on which no taxes are i… Nonprofit , A corporation or an association that conducts business for the benefit of the general public without shareholders and without a profit motive. Nonpro…