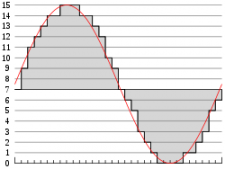 oxford
views updated
pulse code modulation (PCM) A technique used by codecs to convert an analog signal into a digital bit stream. The amplitude (usually) of the analog signal is sampled (8000 samples per second for voice-quality telephone lines with 4000 Hz bandwidth), and a digital code is selected to represent the sampled value. The digital code is transmitted to the receiving end, which uses it to generate an analog output signal. Encoding techniques may be used to reduce the amount of data that is transmitted between the sender and the receiver, based on known characteristics of the analog signal. For example, mu-law (μ-law) encoding converts the analog signal to a digital code based on the logarithm of its value, rather than on a linear transformation.

Differential PCM (DPCM) transmits the difference between the current sample and the previous sample. DPCM assumes that the difference requires fewer bits than the signal amplitude.

Delta (Δ) PCM is a version of DPCM in which a single bit is used for each sample, representing a signal change of plus or minus one unit. A constant signal is represented as a series of plus or minus transitions.

Predictive PCM extrapolates from the previous few samples what the next sample should be, and transmits the difference between the actual value and the predicted value.

A Dictionary of Computing JOHN DAINTITH

Nearest-neighbour Sampling Method , Skip to main content nearest-neighbour sampling method Aliasing , aliasing A distorting effect caused by sampling an image at too low a rate. When a signal is undersampled, high-frequency components cannot be distin… Random-walk Technique , Skip to main content random-walk technique random-walk technique random-walk technique A method of random sampling in which the number of paces betwe… Dna Fingerprinting , Deoxyribonucleic acid (DNA ) typing is a way to categorize an individual's genetic makeup in order to distinguish one individual from another. This h… Mark-recapture Technique , mark-recapture technique A technique for estimating the population density of more elusive or mobile animals. A sample of the population is captured,… Random Sample , random sample A sample in which each individual measured or recorded (e.g. organism, site, or quadrat) is independent of all other individuals and al…