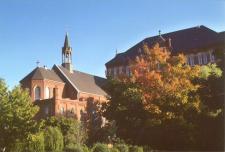 DUQUESNE, FORT, a French stronghold at the confluence of the Allegheny and Monongahela Rivers, at Pittsburgh, Pennsylvania. In 1753, the Marquis Duquesne de Menneville, governor of New France, moved to seize the Ohio Valley from the British. On the route from Lake Erie to the Allegheny River, forts were erected at Presque Isle, Le Boeuf, and Venango. In the same year, Robert Dinwiddie, British lieutenant-governor, sent George Washington to warn the French to cease encroaching on the Ohio Valley. The French refused to back down. In February 1754, an expedition of 800 Frenchmen left Montreal, and, on 17 April, took possession of the fort being built by the Ohio Company at the confluence of the Ohio River. The French destroyed this work and constructed Fort Duquesne on the site. The rivers protected two sides of the triangle; walls of squared logs and earth twelve feet thick protected its base. Outside the walls was a deep ditch and beyond that a log stockade.

Troops left Fort Duquesne to defeat Washington at Great Meadows in 1754 and to rout Gen. Edward Brad-dock's expedition in 1755. After Braddock's defeat, the French held undisputed possession of the Ohio Valley for three years, administering their military occupation from Fort Duquesne and stimulating Indian raids on the frontiers of Pennsylvania, Virginia, and the Carolinas. Finally, on 24 November 1758, when Gen. John Forbes's expedition neared the forks of the Ohio, the French destroyed Fort Duquesne and retreated. The English rebuilt the fort and renamed it Fort Pitt; the protection provided by Fort Pitt allowed Pittsburgh to develop as a city.