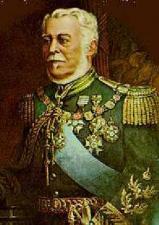 Luiz Alves de Lima e Silva Duque de Caxias (1803-1880), was the most famous soldier in Brazilian history. He led the Brazilian army in the pacification campaigns during the regency and served as allied commander in the Paraguayan War.

Luiz Alves de Lima e Silva was born on Aug. 25, 1803, into a respected military family. He compiled a brilliant record in the military school in Rio de Janeiro, took part in the independence campaigns, fought in Uruguay in 1825 against Juan Antonio Lavalleja, and by the age of 25 had risen to the rank of major. In April 1831, following the abdication of Pedro I, Lima e Silva was called upon to organize and command the national guard to maintain order in Rio and its environs.

During the hectic regency period Lima e Silva methodically extinguished insurrections in rebelling provinces and in 1841 was named Baron of Caxias for his distinguished service. Rio Grande do Sul was still racked by the War of the Farropos, begun in 1835. Appointed president of the province and commander of imperial forces in 1842, Caxias combined lightning cavalry raids with superior infantry and artillery to force the insurgents to a peace settlement 3 years later. In 1852 Caxias led the Brazilian army at the victorious battle of Monte Caseros against Argentina's Juan Manuel de Rosas.

Caxias's military genius and sense of political moderation were highly regarded by the Conservative party. He was often called into government service—a traditional ploy of the monarchy to placate powerful military figures. In 1855 he was named minister of war, and in 1862 he became president of the council, a position he held on three separate occasions.

In 1866 Caxias was recalled to active duty to command the Brazilian army in the Paraguayan War against Francisco Solano López. Caxias replaced Argentina's Bartolomé Mitre as commander in chief of the allied armies in 1868. By the end of 1868 he dealt López's army a crushing defeat at Itá-Ibatay and proclaimed the war's end. He neglected to cut off López's escape, however, and the enemy retreated to the Chaco and continued to fight. On Jan. 12, 1869, he returned to Rio to face a Senate investigation for his conduct of the war. Absolved of all charges, Caxias was decorated, and on March 26 Pedro II raised him to the rank of duke, the only holder of that title in the history of the empire.

After the Paraguayan War perhaps only the influence of Caxias subordinated the increasingly arrogant military to civilian control. His death in Rio on May 7, 1880, unleashed the militarism which Brazil had been able to escape for over half a century. Caxias is remembered in Brazilian history as the "Pacifier" and "Patron of the Army," and his birthday is celebrated as the Dia do soldado (Army Day).

There is no study of Caxias in English. General works which discuss him include João Pandia Calogeras, A History of Brazil (1930; trans. 1939), and Alva Custis Wilgus, ed., Argentina, Brazil and Chile since Independence (1935). □