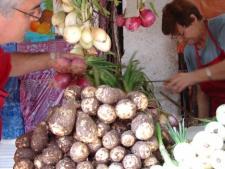 Camagüey, city (1995 est. pop. 295,000), capital of Camagüey prov., E Cuba. The island's third most populous city, Camagüey, is a leading hub of rail, road, and air transport as well as an important commercial center. The economy is based on agriculture, cattle raising, and mining. Industries (mainly meatpacking and dairy processing) are mostly related to processing and transport. Founded in 1514 as Santa Maria del Puerto Principe, the city was moved to its present site in 1528 and renamed for the Native American village that previously occupied that site. During the colonial period Camagüey produced salted beef for the Spanish fleets and was often sacked by English, French, and Dutch pirates. The city, which has retained much of its Spanish colonial atmosphere, is noted for its churches, mansions, and narrow twisting streets.

Camagüey (kämägwā´, kämäwā´), province (1995 est. pop. 840,000), E central Cuba. Camagüey is the capital. The area is a vast prairie and is Cuba's largest province. The major economic activities are cattle raising (practiced there since the early colonial period), the cultivation of sugarcane, and the production of chromite. Meatpacking, pineapple canning, and other agricultural processing are also industries.

Eye Of Storm , eye of storm Eyes , Skip to main content eyes eyes are both windows and beacons for the mind. They provide vision — our most precious sense. But they also transmit signa… Pineal Eye , pineal eye (epiphysial eye, median eye) In Sphenodontidae (tuatara), some lizards, Petromyzonidae (lamprey), and many fossil vertebrates, a structure… Amblyopia , Definition Lazy eye, or amblyopia, is an eye condition in which disuse causes reduced vision in an otherwise healthy eye. The affected eye is called… Strabismus , Definition Strabismus is a condition in which the eyes do not align in the same direction. It is also called crossed eyes or squint. Description With… Eye , The human eye is an amazing instrument. It is the body's camera, capturing images of the world with striking clarity in a virtual instant. The eye an…