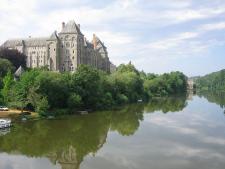 oxford
views updated
Solesmes. Fr. village near Le Mans where the monks of the Benedictine monastery became famous for their work on restoration of liturgical mus. Order founded 1833 by Dom Prosper Gueranger. Important publications on nature of plainsong issued in 1883, 1891, and 1896. When Pope Pius X in 1904 est. commission to prepare new official edn. of plainchant, the Solesmes Benedictines were appointed eds. This edn. was known as Vatican Edn. (but some authorities on the subject strongly criticize its interpretation of Gregorian rhythm). In 1901, because of their non-compliance with Law of Associations, the monks were expelled from Solesmes and moved to I.o.W. and later to Quarr Abbey, near Ryde. Returned to Solesmes 1922.