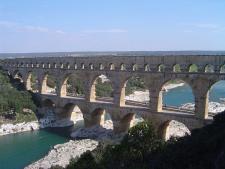 oxford
views updated
Pont du Gard an arched structure built by the Romans c.14 ad over the River Gard in southern France as part of an aqueduct carrying water to Nmes. Three tiers of limestone arches of diminishing span support the covered water channel at a height of 55 metres (180 ft) above the valley. In the 18th century the lowest tier was widened to form a road bridge, which is still in use.