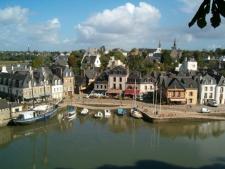 oxford
views updated
Auray, battle of, 1364. Sir John Chandos, who had fought at Crécy and Poitiers, was engaged in 1364 in supporting the claims of John de Montfort to the duchy of Brittany against those of Charles de Blois. On 27 September, while besieging Auray, he was attacked by Bertrand du Guesclin. The French were defeated, Blois killed, and du Guesclin captured.