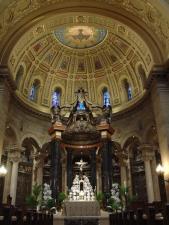 oxford
views updated
St Paul's cathedral. The first cathedral was founded by Æthelbert, king of Kent, on the site of a former Roman temple (604); destroyed by fire, it was rebuilt in stone (675–85) by Bishop Earconweald, whose shrine attracted many medieval pilgrims, but was destroyed by Vikings (962). The third building burned down in 1087, and its replacement, known as ‘Old St Paul's’, outshone anything previously seen in London. Initially in Norman style, it developed into a great Gothic cathedral with a towering spire, the largest church in England and third largest in Europe. The spacious walled precincts contained Paul's Cross, an open-air pulpit, whence papal bulls, royal proclamations, and impassioned sermons, while the cathedral itself was used for royal ceremonies and thanksgivings. Deprived of much of its revenue by the Reformation, structural decay set in; houses and shops were erected against its walls, and the nave became a common thoroughfare (‘Paul's Walk’) and place for conducting business. Repairs were makeshift until Inigo Jones altered the west front and attempted to strengthen the entire fabric (1634–43), but the parliamentarians turned the nave into cavalry barracks and appropriated the rest of the repair fund. A ‘loathsome Golgotha’ by 1660, Wren offered a design to the 1663 royal commission, but, although it had been hoped that the cathedral would escape the conflagration, the only thing to survive the Great Fire was John Donne's effigy. Wren's ‘Warrant Design’ was approved in 1675, fortunately permitting ‘variations, rather ornamental than essential’, of which he took full advantage; progress was slow, but it was completed within his lifetime. A resting-place for naval and military commanders (Nelson, Wellington) as well as Wren himself, it has continued as a focus for state services, surviving the Blitz and retaining a close relationship with the city, although its skyline dominance has lessened from recent office-building.