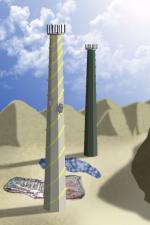 There is a detailed description of the pillars in ii Kings 7:15–22, 41–42 and ii Chronicles 3:15–17; 4:12–13. The pillars were composed of two major parts: the stem, 18 cubits (c. 30 ft.) in height, five cubits (c. 8 ft.) in circumference, and one cubit in diameter; and the capital of the pillar, five cubits in height. The size of the capital was apparently altered in one of the renovations of the Temple, undertaken after the time of Solomon. Thus, in ii Kings 25 the height is given as only three cubits. During the renovation all the pillars were apparently recast, which probably explains the contradiction between the description of the construction of the pillars in Kings and that in Jeremiah. According to the former, the pillars and their capitals were cast from solid copper (i Kings 7:16, 46), while according to the latter, they were hollow (Jer. 52:21).

It is more difficult to discover the nature of the capitals, as the description of their construction is filled with unclear technical terms which do not appear elsewhere (cf. Kings 7:17–20, 41–42; Jer. 52:22–23). Without going into detail, it can be said that the capitals were decorated with three varieties of ornamentation – shushan ("lilywork"), sevakhah ("mesh-work") and rimmonim ("pomegranates"), crowned by an additional architectural design called gullah (גֻּלָּה). The last item is usually interpreted as a round bowl (on the basis of the parallel Akk. gullatu and the description of the Temple lamp in Zech. 4:2–3). The meaning of the other three terms is doubtful, and scholars usually resort to archaeological parallels for reconstructing them.

Rabbinic scholars and medieval Jewish exegetes held that the capital here is a double one (cf. i Kings 7:20). Indeed, double capitals are known from clay molds of cultic structures from Palestine and Cyprus dating to the period under consideration, i.e., the Iron Age. In these molds, as in the biblical descriptions, there is a capital of lily leaves, in the center of which is a semispherical bowl. Even more similar examples are found in ivory inlays from Palestine and Mesopotamia dating from the eighth to the sixth centuries b.c.e., which contain an additional element of a series of elongated mauve objects shaped like pomegranates hanging below a capital decorated with lilywork. Some later scholars identified this capital with the square proto-Aeolian capitals (Yadin) characteristic of the architecture of the time of Solomon, which have been discovered in various locations in Palestine (in the royal palaces in Samaria, in the fortress of Ahab in Hazor, in the governor's house in Megiddo, Ramat Rahel, Gezer, etc.). Others attempted to reconstruct the appearance of the capitals by comparison with incense stands discovered in Megiddo, Taanach, and Gezer (Smith and, following him, Albright). The closest example is that from Megiddo, which like the biblical model contains three architectural designs – a bowl, rosette work (buds of flowers and lotuses), and pomegranates. In light of recent archaeological findings it has been suggested that sevakhah (i Kings 7:17) should be explained as apertures in the bowl, like those found in incense stands (cf. ii Kings 1:2, where sevakhah refers to the "window bars"). This interpretation, however, is far from the literal meaning, and what is described here is a woven net which surrounded the capitals.

According to the Masoretic Version (i Kings 7:21 and ii Chronicles 3:17), it appears that the pillars stood in front of the Sanctuary, inside the entrance hall. Their size, however, gives rise to doubts concerning their structural function. Thus, few scholars maintain that the pillars fulfilled any function in supporting the roof of the portico (as in temples of the Canaanite and Israelite period in Arad, Megiddo, and Tell Teinat). Most scholars tend to the opinion that these were two freestanding pillars, one on each side of the entrance, like those found in the archaeological artistic tradition of the Ancient East and in references in classical literature (Yeivin, Mazar, Albright, Smith, Roth, Watzinger, Berns, Galling, Gressmann, etc.). Thus, in the three molds from the Iron Age mentioned above, the common element is the freestanding pillars in front of the entrance. A similar phenomenon was found in three temples from the eighth century in Khorsabad in Assyria. Graphic representations of pillars standing outside the structure of a temple have been found on coins from the first century c.e. in Cyprus, Sardis, Pergamum, and Sidon. Finally, there are literary references to this type of pillar in descriptions of the temples of Herakles (Herodotus, 2:44), of the Tyrian Baal (Menader, quoted in Jos., Ant. 8:145), and of the Syrian goddess Atratah (Lucian, De Syria Dea, 16–27); one or two such pillars were constructed in honor of Herakles in the Tyrian settlement of Gadez (modern Cadiz) in Spain (Strabo, 3:170).

Even those scholars who agreed that these pillars played no structural role in the Temple were divided in their opinions regarding their function. One suggestion was that they had a mythological significance, as "trees of life," or cosmic pillars; or perhaps they fulfilled a ritual function as cressets or incense lamps, like those found in a drawing of a tomb in Mareshah (Smith, Albright). Another possibility is that they had only symbolic significance, symbolizing the dwelling place of God in the Temple, like the monuments found in the temple in Shechem and the temple of Mekal in Beth-Shean (Yeivin); or perhaps they were imitations of Egyptian obelisks (Hollis).

The Septuagint in one passage (i Kings 7:21 [7]) reads the Masoretic Boaz as Baaz (also Boas), and in another (ii Chron. 3:17), as an adverbial phrase, Iσχύς (be-oz, "with strength"). The Vulgate reads it as Booz. Opinion was divided regarding the names as well. Those who maintained (Sayce, Cook, Cheyne) that what was described here is an imitation of a foreign custom maintained that the Hebrew names were a translation of the names of Babylonian or Phoenician gods. In contrast, some scholars maintained that these were predicates of the God of Israel (Klousterman). Some scholars held that these names were derived from a longer text (Sellin, Gressman). Especially well known is the suggestion by Scott that these are the first words of a literary work, similar to the biblical dynastic prophecies and royal hymns, which was engraved on the pillars. More acceptable is the opinion that the names Jachin and Boaz are proper names, like those found in other places in the Bible, representing the names of the builders or contributors (Gesenius, Ewald); or perhaps they were actually names of members of the royal household, as S. Yeivin maintains (cf. Num. 26:12; Ruth 2:1; i Chron. 24:17). Thus the pillars play a double role: they emphasize, on the one hand, the personal relationship between the Temple and the royal family and, on the other, the presence of God within the Temple.

The names of two symbolical pillars of King Solomon's Kabalistic temple. They were believed to explain the mystery of the meaning of life. One was black and the other white, representing the powers of good and evil. It was said that they symbolized the need of "two" in the world. Human progression requires two feet, the worlds gravitate by means of two forces, generation needs two sexes.