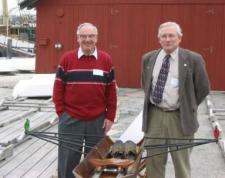 Most experts consider Walter "Big Train" Johnson (1887-1946) to be the greatest pitcher in baseball history. Both feared and respected, Johnson combined a dominating fastball with a generous spirit. Unlike most pitchers of his era, he refused to knockdown opposing batters with inside pitches and was a model of gentlemanly refinement both on and off the field.

The 6-foot-1, 200-pound Johnson won 416 games in his 21 seasons from 1907 to 1927 and compiled a remarkable 2.17 earned run average. He spent his entire career with the lowly Washington Senators, eventually leading the perennial losers into the World Series in 1924 and 1925. Johnson won 20 or more games in 12 seasons and set the all-time career mark for shutouts with 110. After his playing days ended, he managed the Senators from 1929 to 1932 and the Cleveland Indians from 1933 to 1935. He was among the first five players elected to the National Baseball Hall of Fame in 1936.

From Semipro to Star

Johnson's parents, immigrants from Sweden, were farmers who first settled in Ohio, then traveled by covered wagon to Kansas. Walter Perry Johnson was born on November 6, 1887 in Humboldt, Kansas. In 1901, the family moved to Orange County, California, hoping to earn a better living working in the oil fields. There, Walter attended Fullerton High School and starred on the baseball team. After graduating, he played baseball briefly in Tacoma, Washington, then moved to Weiser, Idaho, and got a job with the Weiser Telephone Company. For $75 a month, he dug holes for telephone poles and pitched for the company's semipro team.

Johnson flung the ball with a sidearm delivery that was so deceptive that his fastball seemed to come out of his hip pocket and rocket past the batter. Luckily for hitters, he also had pinpoint control. Word of Johnson's remarkable pitching feats filtered east, through the reports of a traveling cigar salesman who praised the kid's fastball in reports sent to major league teams. One reporter wrote: "He throws so fast you can't see 'em, and he knows where he is throwing, because if he didn't, there would be dead bodies all over Idaho." The Senators sent an injured catcher, Cliff Blankenship, to scout him. Blankenship signed Johnson to a contract and he joined Washington in August 1907, never having played minor league ball. The Pittsburgh Pirates had wanted to sign him, but refused to guarantee his $9 train fare back home if he didn't make the team. Johnson signed for $350 a month, a $100 bonus and the train fare—and that proved to be the best investment the Senators ever made.

Johnson was 19 when he began pitching for the Senators. In his big-league debut against Detroit, on August 2, he lost, 3-2. But Ty Cobb was so impressed that he told Tigers manager Frank Navin: "Get this kid even if he costs you twenty-five thousand dollars. That's the best arm I've ever seen. He's so fast it scared me." Navin refused. Cobb later said: "All he did for the next twenty years was beat Detroit."

During Johnson's first three seasons, he lost 48 games and won only 32. But his talent and stamina were obvious from the start. In 1908, he shut out the New York Highlanders (later known as the Yankees) three times in four days, allowing only 12 hits. He won two more games against the Philadelphia Athletics in the next four days, giving him five victories in eight days. Legendary sportswriter Grantland Rice soon labeled Johnson "The Big Train," because his fastball had the power and speed of a locomotive. His teammates called him "Barney," after racecar driver Barney Oldfield. That was because Johnson was as reckless and uncontrolled behind the wheel as he was totally in control on the mound.

In 1910 Johnson was the Senators' opening day starter. Before the game he caught a ceremonial "first pitch" from President William Howard Taft, starting a tradition of presidential "first pitches" at Washington openers. Johnson won the game with a one-hit shutout. He would go on to win nine openers in front of four different presidents, seven of them shutouts, and started 14 opening games in all. His last, in 1926, was a 15-inning shutout.

In 1913, at the age of 26, Johnson turned in probably the most dominating season by any major league pitcher in history. "The Big Train" won 36 games, lost 7, had a miniscule 1.09 earned run average, and struck out 243 batters in 346 innings. Johnson completed 11 shutouts and threw 56 consecutive scoreless innings during one stretch. No pitcher ever again won 36 games in a season. For his efforts, Johnson won a new Chalmers automobile as the American League's Most Valuable Player.

From 1910 to 1916, Johnson had seven consecutive seasons of 25 wins or better. His earned run average never rose above 2.30 in any of his first 11 seasons in the major leagues. Johnson led the league in strikeouts in 12 of his 21 seasons, including eight years in a row from 1912 through 1919. Five times he led the American League in earned run average, six times in wins, and six times in complete games. In 1916 he did not allow a home run in 371 innings pitched, a record that will never be broken, because pitchers no longer pitch more than 300 innings in a season. On May 11, 1918, he pitched an 18-inning, 1-0 victory over Chicago.

Most great pitchers of Johnson's era relied on the spitball. But Johnson felt the spitter, which at that time was perfectly legal, was unfair. Johnson's right arm acted like a pendulum, whipping his fastball past stunned batters. Cobb said his fastball "looked about the size of a watermelon seed and it hissed at you as it passed."

Tigers outfielder Sam Crawford said Johnson was such a fluid, effortless pitcher that he was like a pitching machine. "He had such an easy motion that it looked like he was just playing catch," Crawford told author Lawrence Ritter. "That's what threw you off. He threw nice and easy— and then, swooch, it was by you." There were no radar guns in the days when Johnson pitched, so there is no way of comparing his speed to latter-day fireballers such as Nolan Ryan, but many baseball experts believe Johnson threw harder than anyone in history.

Johnson wasn't just frighteningly fast; he was uncannily accurate. He had such pinpoint control that he averaged less than two walks a game for his career. Johnson also was an excellent athlete and a complete player. He fielded his position almost flawlessly, compiling the best fielding percentage and most assists of any pitcher in major league history. And as a hitter, he could also be formidable. In 1925 he batted .433, the highest average ever by a pitcher.

In a time when baseball was a rowdy sport, Johnson was admired by friend and foe alike for his unflagging sportsmanship. He was just as graceful off the field as on the mound—a refined gentleman who stood out among his boozing, wild-living teammates and opponents. Johnson never drank, smoked, or used profanity.

Won for the Underdogs

Johnson completely dominated batters through the 1919 season, which marked the end of the so-called "dead-ball era." But the Senators rarely were a winning team. The victories Johnson might have amassed with a better team would have brought him much closer to Cy Young's record of 511 wins. In the 279 games Johnson lost during his career, his team was shut out in 65 of them. In 27 games, Johnson lost by a score of 1-0. He also won 38 games by the same 1-0 score. Johnson holds the record both for 1-0 victories and 1-0 losses.

Throughout Johnson's career, many better teams made overtures to obtain him. The most serious offer came after the 1914 season, when Chicago of the upstart Federal League offered him $25,000 per season for three years. Johnson was earning a $12,000 annual salary at the time. Washington matched the offer, and Johnson stayed loyal to the woebegone Senators for the rest of his playing days.

In the last eight years of Johnson's career, as Babe Ruth broke home run records and baseball changed to a power-hitting game, Johnson had only two 20-win seasons. His strikeout totals declined markedly as pitchers became less dominant and he entered the waning years of his career. But his determination to win never flagged. On July 1, 1920, Johnson pitched a 12-inning no-hitter, beating Boston 1-0.

In 1924, Johnson again was named the league's Most Valuable Player, leading Washington to a rare appearance in the World Series. During the series, Johnson started two games and lost twice to the New York Giants, but his team stayed alive and forced a seventh and deciding game. With the seventh game tied in the eighth inning, the Senators brought in Johnson as a reliever. Though he was working on only one day's rest, Johnson pitched four scoreless innings and the Senators won in 12 innings. Even his opponents were impressed. "The good Lord just couldn't bear to see a fine fellow like Walter Johnson lose again," said Jack Bentley, the losing pitcher for the Giants.

In 1925, Johnson had 20 wins against only seven defeats and the Senators returned to the World Series. Johnson won his first two starts against the Pittsburgh Pirates, allowing a total of one run. However, he lost the final game, 9-7, when his teammates' errors led to four unearned runs, and the Pirates beat the Senators to win the world championship.

In 1927, Johnson was struck by a line drive during spring training and broke his leg. He tried to pitch wearing a leg brace, but without much success, and he retired after the season. His career 2.17 earned run average ranks seventh among all major league pitchers. He ranks second on the all-time list in victories, third in innings pitched (5,923) and fifth in complete games, with 531. Johnson's 3,508 strike-outs set a new record which stood for 50 years; by the end of the century his career strikeout total ranked seventh.

After his playing days ended, Johnson remained in baseball. In 1929, he became a manager with the Senators. Washington won more than 90 games in three of Johnson's four seasons at the helm but never finished in first place. Johnson then managed the Cleveland Indians from 1933 through 1935. He returned to Washington as a radio broadcaster in 1939.

In 1936, Johnson was one of five players, known as "the Five Immortals," who were the first inductees to the National Baseball Hall of Fame. The others were Ty Cobb, Babe Ruth, Honus Wagner and Christy Mathewson.

In his later years, Johnson dabbled in farming and politics. After his Hall of Fame induction, he retired to his farm in Germantown, Maryland. In 1938, he was elected Montgomery County commissioner. In 1940, he ran for the United States Congress as a Republican, narrowly losing. In April 1946, he was felled by a brain tumor. He died on December 10, 1946, in Washington.