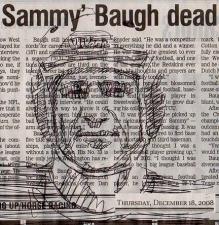 The first superstar passer in college football, Sammy Baugh held every National Football League (NFL) passing record and was chosen for the charter classes of both the college (1951) and professional (1963) football halls of fame. Many of his records stood for fifty years and others will never be broken. The college All-American became a six-time NFL All-Pro. He coached college football and was the first head coach of the American Football League's (AFL) New York Titans (now the New York Jets).

Samuel Adrian Baugh was born March 17, 1914 on a farm outside Temple, Texas, a town of 10,000 people halfway between Austin and Waco. Recruited to play baseball at Texas Christian University (TCU), his coaches saw raw athletic talent when he tried out for football in the off-season. Nicknamed "Slinging Sammy" because of his rifle accuracy passing skills, he went on to break every record in Southwest Conference football (1934-1936) and play professional football for the Washington Redskins (1937-1952).

Football in Texas is a big-time sport, even for youngsters. Baugh started playing when he was eight years old. Beyond the Temple bantam leagues, junior high kids competed with youngsters from other towns. Baugh remembers playing the Cisco Lobos for the Texas state junior high championship. Texas football is also a small and insular world. Watching from the sidelines in Temple was Ki Aldrich, who later became Baugh's college and professional football teammate.

Baugh played one year of high school football in Temple before his family moved to Sweetwater, Texas, where Baugh joined the football team. Aiming for the opening in a used automobile tire swinging from a tree limb, he practiced pinpoint accurate passing as he moved around his backyard.

A letterman in three sports, baseball was Baugh's long suit. Because Sweetwater High School did not field a baseball team, Baugh played semi-pro ball for the Abilene Oilers. When the Oilers played a game against Texas Christian University (TCU) in Fort Worth, Baugh's talent caught the eye of TCU athletic director Leo "Dutch" Meyer.

Recruited for College Career at TCU

In 1933, Meyer recruited Baugh to TCU to play baseball. When Meyer became the TCU football coach in 1934, he recruited Baugh to play as a single-wing tail-back. By the end of the season, which TCU finished 8-4, Meyer saw Baugh's leadership with the team and moved him to a T-formation quarterback. College quarterbacks handed the ball to running backs who advanced the ball. In 1935, TCU went 12-1 and captured the national championship.

According to folk lore, sports writer Pop Boone of the Fort Worth Press named him "Slingin" Sammy. Baugh became the first great passer in college history. In his three seasons at TCU (1934-1936) he completed 285 passes (out of 597) for 3,471 yards. He scored thirty-nine career Horn Frog touchdowns.

Sports Illustrated writer and novelist, Dan Jenkins, recalled Baugh's powerful arm and intensity of play. "In Sam's three seasons at TCU, he beat at least seven teams that were ranked in the nation's top 10 at the time—Rice in 1934; Baylor, Rice and LSU (in the Sugar Bowl) in 1935; Arkansas, Santa Clara and Marquette (in the Cotton Bowl) in 1936." Jenkins was only seven years old when he first saw Baugh play in Fort Worth.

Baugh did more than just lead the team on offense. He was also an outstanding TCU defensive back and punter. Dutch Meyer called him "the greatest athlete I ever saw." As a punter, he averaged 40.9 yards for 198 tries. One punt went eighty-five yards.

In 1936, the Horn Frogs played LSU in the Sugar Bowl in New Orleans. In a cold New Years Day fog, TCU won the game 3-2. Even though he was unable to score an offensive touchdown, Baugh intercepted two LSU passes and made a spectacular forty-four yard run across the icy field to set up a field goal. He punted the ball fourteen times with a forty-eight yard average. He was named an All-Southwest Conference player in 1935 and 1936, and an All-American in 1936.

In the 1937 Cotton Bowl, the first one played in Dallas, Baugh led the Horn Frogs to a 16-6 victory over Marquette. In the fourth quarter of this battle between Baugh and Buzz Buivid, the two best passers in college football, "Slingin Sammy" stayed on the sidelines. Couch Meyer wanted his quarterback for the 1938 season, Davey O'Brien, to get some playing time. Because it was Baugh's final college football game, the crowd chanted his name until he returned for a few last plays of the game. The next year O'Brien won the Heisman Trophy.

Selected by the Washington Redskins in the first round of the 1937 college football draft, Baugh felt he would warm the bench. There were no passing quarterbacks in pro football and he doubted any team would take a chance with him. When baseball scout, Rogers Hornsby , came calling, Baugh signed on to play third base for the St. Louis Cardinals. The Cardinals changed him to shortstop and sent him to their minor league franchise in Columbus, Ohio. Subsequently, the Cards sent Baugh to their Rochester, New York farm team where he played shortstop behind Marty Marion. Marion became a Cardinal regular while Baugh looked at changing sports.

Baugh called Redskins owner George Preston Marshall and told him he decided to try pro ball for one year. The Redskins had moved from Boston to Washington in 1937 and sought novel ways to recruit new fans. Marshall thought it was a great gimmick to bring a Texas cowboy quarterback to play in the nation's capital so he gave Baugh a shot. Those were the days of leather cap helmets that offered little protection. It was not until the John T. Riddell Company, researching using plastics for army helmets, developed a prototype for football players that evolved into standard headgear in the 1940s.

Marshall paid Baugh $8,000, but he got his money's worth. After practicing for only a week with the Redskins, he led the team to a 13-3 victory over the powerhouse New York Giants. In their inaugural season in Washington, Baugh led the Redskins to a National Football League (NFL) championship over the heavily favored Bears at Wrigley Field in Chicago. Each Bears player in the championship game received $122.78.

Baugh played a full sixty minutes of football, seeing action both as an offensive quarterback and defensive back. His professional football record for best career punting average (41.1 yards) and best single season punting average (51.4 yards in 1940) remain unbroken today. His pass completion average of 70.3% stood from 1945 until 1982. In 1943, he became the only NFL player to lead the league in passing, punting and interceptions.

Ki Aldrich watched Baugh play junior high school football from the sidelines in Temple, Texas. Later Aldrich became Baugh's college and professional football teammate. He gained fame after a college career at TCU and as a first round draft pick by the Chicago Cardinals. He went on to play for the Cards in 1939 and 1940. In 1941 he joined Baugh and played professionally two seasons for the Washington Redskins before joining the Navy during World War II. He returned to play for the Redskins from 1945 to 1947 and then retired.

Charles C. "Ki" Aldrich was born in Temple, Texas June 1, 1916. He became a standout college center for the Texas Christian Horn Frogs. His pass interceptions in the team's 1937 Cotton Bowl victory over Marquette won him an Outstanding Player designation. He captained the 1938 team to a national championship 11-0-0 record and a Sugar Bowl victory with Heisman Trophy winner Davey O'Brien at quarterback. A three time All South-west Conference Center he was named to the All-American team in 1938 and the College Football Hall of Fame in 1960. Aldrich died March 12, 1983.

After leaving the Redskins, Baugh coached college and professional football. He was elected to the College Football Fall of Fame in 1951. In 1952, he became an assistant coach at Hardin-Simmons University in Abilene (TX) to be near his beloved Double Mountain Ranch in Rotan, Texas, eighty miles away. He became the head coach in 1955. During his four year stint Hardin-Simmons claimed a 23-28 record. The Texas Sports Hall of Fame installed him as a member in 1954.

In December 1959, Baugh accepted a job in the newly organized American Football League as head coach of the New York Titans (now the Jets). He had a 14-14 record in his two-year tenure. He returned home to West Texas until he was lured out of retirement in 1963 by owner Bud Adams, to become head coach of the Houston Oilers. That same year Baugh was named to the Pro Football Hall of Fame. He lasted just one season as head coach but stayed on until 1966 to coach the backfield offense. He joined the coaching staff of the Detroit Lions in 1966 on a six-month contract so he could tend his 500 head of cattle in Texas during the rest of the year. He retired to his ranch permanently in 1968.

Baugh's college football feats had not been forgotten. In 1993 Texas Christian University retired his Number 45 jersey and in 1999 he was elected to the Cotton Bowl Hall of Fame in 1999.

College Hall of Fame sportswriter Grantland Rice was no slacker of hyperbole. During the Golden Age he immortalized Notre Dame's "Four Horsemen." The best team in college football today is awarded the Grantland Rice Trophy. He said of Sammy Baugh's passing, "He hurled the ball with as much speed as [professional baseball] player Dizzy Dean ever knew." That was an understatement.

Historians say that Sammy Baugh was the first great passer in the National Football League. He played as an offensive quarterback and punter. On defense, Baugh was a safety. In 2002, he still held records in five NFL categories and was tied for first in five more. Baugh's jersey number (#33) is the only one ever retired by the Washington Redskins.