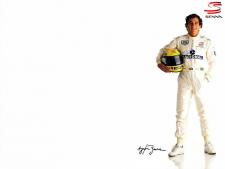 Brazilian race car driver Ayrton Senna was a famous professional race car driver and sportsman at the time of his death in a racing crash in 1994. After an outstanding career on the kart racing circuit, Senna was a three-time champion of the elite Formula One (F1) series. In his brief but spectacular career, Senna proved he was arguably "the most remarkable racing driver of all time," according to Alan Henry in Grand Prix Champions.


Born Ayrton Senna da Silva on March 21, 1960, in Sao Paulo, Brazil, Senna was an awkward child who was later diagnosed with a motor-coordination problem. Senna's father, Milton da Silva, was successful businessman and landowner, but also was a motor racing fan, and encouraged his son's fascination with cars. When Senna was four, his father gave him a one-horsepower go-kart. When Senna got behind the wheel, his awkwardness disappeared—he was a natural. The entire family supported Senna's interest in motoring, and spent weekends together at local parks where the young man could drive his kart. His parents used driving privileges as leverage to get Senna, a lackluster student, to pay better attention to his studies. Fortunately for Senna, his family was wealthy and could afford to finance his racing.

At eight years old, Senna was driving the family car. European racing stars Jim Clark and Jackie Stewart were his heroes, as well as Emerson Fittipaldi, a Brazilian driver who was fast emerging as an extraordinary talent. Senna received a 100cc kart for his tenth birthday, but had to practice on his own at the local kart track until he turned 13, the minimum age for racing karts in Brazil. Interest in European motor racing grew in Brazil when Fittipaldi won the Formula One World Championship in 1972, and the nation hosted its first Grand Prix at Interlagos the following year.

Karting is a fertile seeding ground for racing car drivers, and many future F1 champions got their start as children, in races on European karting tracks. Senna was able to race karts legally when he turned 13, and won his first race. It was held at a karting track at Interlagos, and the young rookie driver beat several karting veterans to the finish. Senna won the 1977 South American Kart Championship, and set his sights on Europe and the World Championships at the famous Le Mans circuit in France.

Senna and his wife, Liliane Vasconcelos, moved to England so he could race 1600cc cars for the Van Diemen team in the Formula Ford series. Senna, believing he would be paid for his efforts, was shocked to discover his family was still expected to cover the high cost of his racing. He took eighth place in his first race in the series, at Brands Hatch, and took third a week later at Thruxton. He proved his mettle under difficult race conditions, including racing in rain. Van Diemen gave the hot young driver its newest car, and Senna won both the Formula Ford 1600 and Formula Ford 2000 series.

Faced with limited opportunities for sponsorship, Senna announced his retirement due to lack of funding. Frustrated, he returned to Brazil to work for his father's building supply business. After just four months, Senna regretted his decision and chose to return to racing. His wife, used to a life of comforts, saw the financial struggles that could lie ahead and chose not to accompany him. Senna's father agreed to co-sponsor his son, along with a Brazilian bank, for one more year of racing. The investment paid off; Senna won 22 races and the 1982 championship.

Charged Into Formula One


Senna took his next step, into the British Formula Three (F3) series, which is a recruiting ground for F1. Senna and British driver Martin Brundle were favorites heading into the season, and the two drivers battled it out to the end. The championship remained contested until the final race at Thruxton. Senna had his engine rebuilt for the race, qualified in pole position (as the fastest pre-race qualifier), and took the F3 Championship. He followed the title with a win at the Macau Grand Prix in Portugal, which pitted him against drivers of all the national series. Senna's outstanding kart career made him a prime pick for F1 negotiations that year, but a twist of internal politics at the prestigious Brabham team left Senna signing a three-year contract with the second-tier Toleman team.

Senna's "self-belief was so extraordinary that it caught people off balance," Alan Henry wrote in Grand Prix Champions. He was a sensitive man whose aloof nature off the track and aggressive habits behind the wheel often gave people the impression that he was cold and relentless in pursuit of victory. He was a remarkably instinctive driver who drove as if the car was an extension of his own body. Senna was also intensely religious and was reported to have something akin to an out-of-body experience while driving. He was shrewd in his business dealings, and always demanded—and received—the astronomical fees he thought his talents were worth. At the time of his death, he had been earning $10 million per year for racing for several years, and that amount was likely doubled by his commercial endorsements and business concerns. He had homes in Brazil, Portugal, and Monte Carlo, and flew between races in his private jet.

Senna made his F1 debut at the 1984 Brazilian Grand Prix at Interlagos. The home crowd was wild for their native son, who was seen as the most promising driver in a generation of F1 competition. Unfortunately, even the best driver cannot be a serious F1 contender while driving an non-competitive car. He managed only to qualify in eighth position on the starting grid at Inter-lagos, and failed to qualify in the next race at San Marino, Italy. Turbo problems with the car forced him to retire before the end of the French Grand Prix, and he qualified in 13th for the Monaco Grand Prix.


Proved His Mettle In The Rain


It was raining in Monaco on race day and Senna, who excelled under wet conditions, took it as his chance to make a move. By the seventh lap, he had moved ahead to sixth place. Senna managed to avoid a series of crashes that took out several race leaders and, though the race was stopped in the 31st lap due to increasingly treacherous conditions, Senna had proven that his talents put him at the front of F1 competition, even if his substandard car did not.

Senna held the Lotus team, of which champions Jim Clark and Emerson Fittipaldi were alumni, in high regard, despite the fact that it had been in a slump since the death of team founder Colin Chapman. Lotus bought out Senna's contract with Toleman and Senna set his sights on returning as a championship contender. He won his first F1 Grand Prix in a Lotus at Estoril under wet conditions, and followed it with another win at Spa in Belgium. But Lotus could not keep up with Senna, and he moved to the McLaren team in 1988. There, reigning champion Alain Prost welcomed his new and promising teammate—at first.

After a lackluster 1987 season, the McLaren team came back in 1988 with a more competitive turbo engine, and Prost found himself embroiled in what would become one of the bitterest rivalries in motor sports. There was no friendly competition between the teammates. Senna was aggressive and impulsive on the track and beat Prost in the 1988 World Championship with eight wins to seven. While Senna thrived on the confrontational rivalry, Prost did not. The fire was stoked further when Prost won the 1989 World Championship after the two McLaren cars collided during the penultimate race of the season, in Suzuka, Japan, taking Senna out of championship contention. Prost left McLaren after the incident to drive for Ferrari.


Senna returned the favor after returning to Suzuka one year later. Senna deliberately ran Prost's Ferrari off the track going into the first corner of the race, taking the 1990 Championship. Senna retained the title in 1991, despite continuing battles with Prost and Britain's Nigel Mansell. Senna finished fourth in the 1992 Championship and second in 1993, as McLaren lost its competitive edge. All told, Senna compiled a remarkable record racing for McLaren, including three World Championships and 35 Grands Prix. Prost announced his retirement from F1 in 1994, when the Williams team announced its intention to sign Senna. Senna threatened to do the same, so incensed was he by Prost's decision to retire on his account.

Senna reached a career high in 1994 by signing a $20 million per-year contract with the formidable Williams team. Despite taking pole position in the first three races of the season, Senna failed to finish in the points. He took pole position again at the 1994 San Marino Grand Prix. He was leading the race in the seventh lap when his car entered a curve and swerved into a concrete wall, killing him. Williams technical director Patrick Head and former team designer Adrian Newey were later charged with manslaughter in Senna's death. The prosecution charged that a poorly modified steering column broke as Senna entered the turn, causing him to lose control of the car. Head and Newey were acquitted of the charges in 1997, but an Italian court threw out the acquittals. In January of 2003 the Chicago Tribune reported that a new trial was expected.

oxford
views updated
Senna, Ayrton (1960–94) Brazilian racing driver. Senna began Formula 1 racing in 1984. His first Grand Prix victory (Portugal) was in 1985. Senna won a total of 41 Grands Prix and three world drivers' championships (1988, 1990, 1991). Considered one of the greatest drivers of all time, he died in a crash at the San Marino Grand Prix.