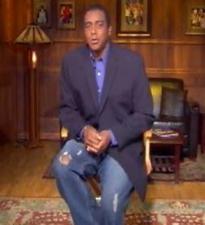 Grew up as “Takoma’s Bobby Moore”

Ahmad Rashad grew up in Tacoma, Washington, graduated from the University of Oregon, and spent 11 seasons in the NFL (1972-82)—the last six with the Minnesota Vikings. Since leaving football, Rashad has become a television sports commentator. His marriage proposal to Phylicia Ayers-Allen—who played Bill Cosby’s TV wife, Claire Huxtable—also has a life of its own.

The story of that proposal and their life together, along with the not-so-typical rags-to-riches football success story that precedes it, makes the Ahmad Rashad story worth reading. His independent maverick spirit shines through every aspect of his life, which is well captured in his autobiography (co-written by Peter Bodo), RASHAD: Vikes, Mikes and Something on the Backside

An unforgettable highlight of his broadcasting career, which was witnessed by 40,000,000 viewers of a pregame show before a New York Jets-Detroit Lions football game at the Pontiac (MI) Silverdome, was his daring on-camera proposal to Phylicia on Thanksgiving Day of 1985. Fortunately, she did not make Ahmad “look like a turkey,” as he had feared, but said “Yes” by satellite feed before a nation of well-wishers.

Bill Cosby earned his “Father Knows Best” TV image by his real-life matchmaking skills, especially with Ahmad and Phylicia. He introduced the couple in 1985, then gave away the bride a year later at the landmark Church of the Master in Harlem. As he walked her down the aisle, Cosby did his usual proud strut and made jokes all the way. O. J. Simpson, Rashad’s teammate from Buffalo and NBC broadcast partner, was “best man.” Phylicia’s sister, Debbie Allen, was matron of honor.

Ahmad gets credit for asking Cosby to introduce him to Phylicia. “My life was full with Billy (her son from a previous marriage) and the (Cosby) show,” she told People. “And I did not want to remarry. I didn’t learn anything from my previous marriages.” She had been married twice before.

Phylicia, a strong self-sufficient single mother let Cosby talk her into meeting Rashad. Their first date was to the

“People’s Choice Awards” in Los Angeles. Ahmad arrived in a rented tux that was falling apart. “He showed me that his pants were held together with a paper clip, and the sleeves, which were too short for his long arms, had been extended with rubber bands. He was so honest and funny,” she told People

They dated casually but never talked about getting married until he surprised her (and 40,000,000 onlookers) with the Thanksgiving Day pregame marriage proposal. Looking back on that famous proposal 11 years later, Rashad confessed, “It was something I decided to do that morning. Only my producer knew I was going to do it,” he was quoted as saying in Ebony Man

They were married just a few weeks after the proposal. Their daughter, Condola Phylea Rashad came along 13 months later. Condola gave each of her parents a second round of parenting. Ahmad has three other (now adult) children from a previous marriage, and Phylicia has Billy. They say that blending their families is no problem. Their children frequently play together, vacation together, and visit together, despite bicoastal relationships and travels that keeps them apart.

Grew up as “Takoma’s Bobby Moore”

The youngest of six children, Rashad was born Bobby Moore. (He took his Muslim name, which means “Admirable One Led to Truth,” after his adult conversion in 1973). He was raised in Tacoma, Washington, where his father, O. C. worked as a barber and shoeshiner at the Fort Lewis military base.

Racism was not endemic to Takoma, as Rashad recalled, but came with military personnel transferred from places around the country where prejudice was a way of life. They displayed racism to his father, often with the young Rashad at his side. His childhood was also marred by a mysterious skin disease that required regular doctor visits, experimental treatments, cuttings, weird elixirs, even spiritual anointing as daily care for years. Faith healers at periodic revival meetings also laid their hands on the boy in the hopes of ridding him of raisin-like bumps on his ears. This earned him cruel nicknames like “Raisin Ears” and “Bumpy.” This overall treatment pattern continued through junior high, when the mystery bumps just as mysteriously disappeared.

Religion was a part of life in Takoma for Rashad. Raised in the Pentecostal faith by devout parents who took him to church for day-long services on Sunday, plus three other times a week, Rashad remembers growing up in fear of a fire-and-brimstone God. He also feared all the “strange things” that went on at church.

Ahmad found solace from this Pentecostal church and from the taunts of schoolmates by joining the Boys Club nearest to his Takoma home—it was a 3-mile walk each way. The South End Boys Club was a melting pot of neighborhoods, a place where Ahmad could become a gym rat, a pool shark, and a stand-out basketball and football player. Football always aggravated the bumps, which always worried his mom, but not Rashad. What bothered him more was not playing sports one whole season due to the racist attitudes of his coach.

Rashad’s athletic ability as an adult did not come from his dad. The non-athletic O. C. Moore played catch exactly once with the future All-Pro receiver. The first experience in sandlot football for Rashad was orchestrated by his brother Dennis. The slight built Rashad gained 80 pounds between his sophomore and senior season, bulking up to 230 pounds by the time he graduated.

After graduation, the future All-Pro football player had outgrown Takoma in many other respects. He grew an Afro and a cocky attitude as he struggled for acceptance. But he managed to avoid the self-destructive drug scene that many of his friends were heading into. So Bobby Moore, a.k.a. Ahmad Rashad, had to get out of state to make a name for himself in football. Ironically, he traded in his recognizable, much-hyped football name (“Takoma’s Booby Moore” or “Bobby Moore, Heisman Trophy candidate”) to become “Ahmad Rashad.” His name change during his second year in the NFL was much-ridiculed, as something silly or pretentious.

Yet Rashad sees his conversion to the Muslim faith as just another development of the spiritual man within. “This is what I’m about. I’m a real person, not Bobby Moore, football player, but Ahmad Rashad, a man who believes in fairness, in truth, and in life.” he stated in his autobiography.

A clutch, game-breaking pass receiver known for his dancing fakes and trademark leaps, began his football career in the late 1960s as a 220-pound All-American running back at the University of Oregon. At Oregon he caught passes with future NFL All-Pro quarterback Dan Fouts and was a Heisman Trophy candidate his senior year, after setting team records in most yards rushing, most receptions, and most points scored.

But it was his attempt to make the basketball team as a freshman sporting an Afro (once again) that first made national news for this quiet but atypical athlete. Bucking the athletic director’s policy stirred a campus-wide debate and raised Ahmad’s black consciousness.

In the early 1970s, he played pro football for St. Louis, Buffalo (where he teamed up with O. J. Simpson), and Seattle, before joining the Minnesota Vikings (and Fran Tarkenton) in 1976. One career highlight that Ahmad will always be remembered for is “the Miracle Catch.” This one went for a 50-yard completion from Fran Tarkenton after it bounced off five other receivers and defenders—and after time had expired on the clock. That desperation pass and catch defeated the Cleveland Browns and gave the Vikings the NFC Central Division title in 1980.

Fran later inscribed a photo for his long-time friend that said, “To Ahmad, thanks for making me a decent quarterback.” But it is equally true that Fran’s great scrambling and passing skills made Ahmad the winner he is today. In his 11-year career, Rashad caught 495 passes, many in the last seconds of the game. Rashad was never a typical jock, instead he saw sport as only entertainment. After finally quitting the game in 1982, he has not picked up a football since.

Five games before being forced out of the game he loved due to a season-ending injury, Rashad announced his intentions to enter the broadcast booth. NBC Sports won the bid for his services and installed him as a pregame analyst on their “NFL Live” show in 1982. For years he was teamed up with host Bob Costas. More recently, Rashad has been teamed with NBC’s Jim Lampley. Whatever the mix or match, Rashad brings his friendly banter and perfectionist standards, becoming one of the best in sports broadcasting.

Ahmad Rashad has since branched out beyond football to cover the Olympics, tennis tournaments, the NBA finals, and feature interviews. In his 16 years as a sports commentator for NBC, Ahmad has scored big with his low-key style, his impish smile, and his engaging, good-guy personality. Because of his many friendships inside the world of sports, he has become the envy of many journalists. Rashad’s craft is on display in every exclusive feature interview, especially with cronies like Michael Jordan, Scottie Pippen, Hakeem Olajuwon, and Muhammad Ali. He’s either “the ultimate sportscaster,” according to Ebony Man, or he’s just another “celebrity pal” who flouts the ethics of journalism with his “kiss-up-to-the-source” style, said Richard Sandomir of the New York Times

Although his football playing days are long gone, his body clock is still set to a daily workout schedule of running, jogging, power sprints, moderate weight training, and intense tennis. On weekends when he is not working, Ahmad can be found in the kitchen with Phylicia, whose good dietary habits have rubbed off on him. Hence, at 200 pounds, the former football player is much lighter in his retirement years than in his NFL playing days 16 years ago. He still looks like he could play with the best of them.

With Peter Bodo, RASHAD: Vikes, Mikes, and Something on the Backside, Viking, Penguin, Inc., 1988.