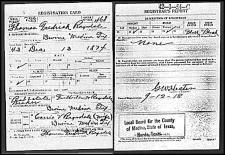 "Freedom from discrimination by the States in the enjoyment of property rights was among the basic objectives sought to be effectuated by the framers of the Fourteenth amendment."
—Frederick Vinson

As the thirteenth chief justice, Frederick Moore Vinson led the U.S. Supreme Court from 1946 to 1953. Vinson rose to the Court after a long career as a lawyer, district attorney, member of Congress, federal appellate judge, and secretary of the treasury. His nomination to the Supreme Court by President harry s. truman followed a dramatic controversy over filling the position, and Vinson inherited a sharply divided Court. His effectiveness as an administrator helped

hold the justices together. Because he was generally disinterested in writing opinions, however, critics have judged his tenure harshly. Despite his liberal attitudes during his political career, he emerged as a predominantly conservative justice except for his support of civil rights.

Born on January 22, 1890, in Louisa, Kentucky, Vinson was the son of a jailer. He graduated from Kentucky Normal College in 1908. In 1909 and 1911, he earned bachelor of arts and laws degrees from Center College in Danville, Kentucky, with the highest marks ever recorded at that school. Establishing his law practice in his hometown, he practiced law for two years before serving as city attorney in 1913 and as district attorney from 1921 to 1924.

In the mid-1920s, Vinson's visibility as a prosecutor led him into national politics. He represented Kentucky in the U.S. House of Representatives from 1923 to 1929 and again from 1931 to 1937. In his last four terms in Congress, he was a strong backer of President franklin d. roosevelt's liberal economic recovery program, known popularly as the new deal.

The support engendered a long relationship between the two men. In 1937 Roosevelt appointed Vinson to the federal bench, and he served from 1937 to 1943 on the U.S. Court of Appeals for the District of Columbia. He became chief justice of the U.S. Emergency Court of Appeals in 1942 and the following year joined the Roosevelt administration as head of the Office of Economic Stabilization. A series of administrative positions culminated with Vinson's appointment as secretary of the treasury under President Truman in 1945.

In 1946 the death of Chief Justice harlan f. stone set off a controversy over who should be his successor. The question for Truman was whether he should elevate an associate justice or select an outsider. Two associate justices—robert h. jackson and hugo l. black—were known to want the job, and each threatened to resign if the other were nominated. To settle the conflict, Truman turned to Vinson, who had both the requisite experience and a calm temperament. Vinson's record of support for a strong federal government was also important to Truman.

During his seven years on the Court, Vinson more or less lived up to these hopes. His steady administration appears to have been effective during a tempestuous era on the Court. As a justice, however, he was less impressive. Vinson was rumored to have given the bulk of his opinion writing to his clerks. Moreover, his pragmatism showed no great philosophic appreciation of constitutional law. He generally voted conservatively except when supporting decisions that upheld the discrimination claims of African Americans; this valuable support for civil rights would be taken further by his successor, earl warren. At the same time, Vinson's anti-Communism fanned the flames of the cold war. In Dennis v. United States, 341 U.S. 494, 71 S. Ct. 857, 95 L. Ed. 1137 (1951), he upheld the convictions of American Communist party leaders.

Vinson's eagerness to bolster federal power can be seen in his most famous opinion, a dissent in youngstown sheet and tube co. v. sawyer, 343 U.S. 579, 72 S. Ct. 863, 96 L. Ed. 1153 (1952). During the korean war, Truman temporarily seized control of most of the nation's steel mills in order to supply the military. The White House asserted that the seizure was necessary to prevent a national catastrophe, but the steel industry argued that the seizure was tantamount to lawmaking—a power held only by Congress. Although the majority in Youngstown Sheet held that the executive decision was unconstitutional, Vinson stated that Truman had acted "in full conformity with his duties under the Constitution."

Vinson died on September 8, 1953, while still serving on the Court. In retrospect, some critics have regarded his tenure as a failure: his lack of vision and his apparent disinterest in writing his own opinions have provoked charges that he was among the few outright failures in Supreme Court history. On balance, his administrative skills seem to have outstripped his judicial ability; he managed a deeply divided Court with tact and diplomacy.

Urofsky, Melvin I. 1997. Division and Discord: The Supreme Court under Stone and Vinson, 1941–1953. Columbia: Univ. of South Carolina Press.