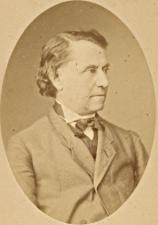 Louis Blanc was the first socialist in any country to hold a government post. The son of a legitimist official dispossessed of his pension by the 1830 revolution, Blanc was a scholarship student at the collège in Rodez. His direct, simple style and useful connections (he started life as tutor to the children of Frédéric Desgeorges, a liberal notable and newspaper editor in the Pas-de-Calais) quickly made him a leading radical journalist. Writing first in 1834 for the Bon Sens, a weekly paper directed at workers, in 1839 he helped found La Revue du Progrès politique, social et littéraire. In 1840 a selection of his articles became L'Organisation du Travail. Within two weeks, three thousand copies had been sold and the next printing disappeared equally fast, probably helped by a government confiscation order. Quoting statistical evidence of poverty published by Ange Guépin, L. R. Villermé, and E. Buret, Blanc argued that free competition, much vaunted by liberal economists, was enslaving workers—especially women—and would ultimately leave the economy in the hands of a tiny minority of the most ruthless employers. His solution was a blend of worker cooperatives, not unlike those set up by Philippe Buchez (1796–1865) and Pierre Leroux (1797–1871), but financed, in a somewhat Fourierist style, by the state as the "banker of the poor." Such worker associations would be kick-started with repayable government loans, after which they would be autonomous. By 1848, Blanc's first book had gone through five editions, each growing fatter as he refuted his critics, who pointed out that social workshops would compete with each other and might also become oppressive to workmen.

By 1848 Blanc had also helped launch the powerful radical daily La Réforme, which promoted both social and suffrage reform. He had written a five-volume influential critique of the Orleanist regime, Histoire de dix ans (1841–1844), and published two of his fifteen volumes of the history of the 1789 revolution in which he revealed considerable sympathy for the ideas of Maximilien Robespierre (1758–1794). Unlike Etienne Cabet (1788–1856) and the Fourierists, he did not attempt to create a socialist movement around himself, nor did he try to set up worker associations as did Leroux and Buchez. Up to this stage, Blanc's contribution was essentially that of a popularizer and synthesizer.

The February revolution of 1848 seemed to offer an opportunity to radicals and socialists to find solutions to the social question. Blanc joined the republican provisional government along with other journalists from La Réforme and Le National. As secretary of the Workers' and Employers' Luxembourg Commission, appointed by the government to advise on the economic crisis, Blanc persistently but vainly urged the ministers to adopt his notion of social workshops. They preferred traditional national workshops, which provided little more than a tiny dole. Blanc's commission managed to arbitrate industrial disputes in the capital and organize a couple of workshops, one of which made the embroidery for national guard uniforms, but his radicalism worried his fellow republican ministers.

Like other radicals, Blanc was alarmed at the lack of a republican majority in the new Constituent Assembly, despite its being elected by direct universal male suffrage for the first time ever. Blanc participated in the workers' march against the Assembly on 15 May 1848, with the ostensible motive of encouraging government support for revolutions abroad, notably in Poland. The big issue, however, was the fate of the government's workshops, which by May had more than a hundred thousand members and seemed both a physical threat as well as a financial burden to the Assembly. After some delay, the conservative majority in the Assembly decreed their closure. The resulting worker rebellion in June was somewhat unjustifiably blamed on Blanc, who had fled to London after the May fiasco. The divisions among radicals about the form of the new republic, plus the lack of majority support for a republic among voters, contributed to the election of Napoleon I's nephew as president and the subsequent reinvention of an empire. Although Blanc had fused a number of socialist strands into his own pet projects, his intransigence and self-conceit in the spring of 1848 helped to isolate him and divide radical reformers.

In enforced residence in London until 1870, Blanc might have been a uniting focus, but he spent his time constantly reiterating his own solutions and arguing with fellow socialists and republicans. Although more of his writing was translated into English than that of other French socialists, he does not seem to have established as much contact with English radicals and Owenites as did the Fourierists. He opposed the Commune of 1871 and was elected to the new National Assembly where he sat as an elder statesman. He was regarded as an inspiration for the radical socialist movement that emerged at the turn of the century. Probably the best-known socialist in his day, he has been the least-remembered in recent years.

Loube're, Leo A. Louis Blanc: His Life and His Contribution to the Rise of French Jacobin-Socialism. Evanston, Ill., 1961.

Sewell, William. "Beyond 1793: Babeuf, Louis Blanc and the Genealogy of 'Social Revolution."' In The French Revolution and the Creation of Modern Political Culture. Vol. 3: The Transformation of Political Culture, 1789–1848. Edited by François Furet and Mona Ozouf. Oxford, U.K., 1989.

Louis Blanc was born on Oct. 29, 1811, in Madrid, where his father was comptroller of finance for King Joseph, Napoleon's brother. Financially ruined by the fall of the French Empire, the Blanc family returned to Paris, and Louis managed to earn enough from his writings to study law.

In 1839 Blanc published his most famous essay, L'Organisation du travail ("The Organization of Labor"). He outlined his social thought, which was based on the principle, "From each according to his abilities, to each according to his needs." His theories were based on solid research and expressed in vivid language. He argued that unequal distribution of wealth, unjust wages, and unemployment, all stemmed from competition. Unlike his predecessors, Blanc looked to the state to redress social injustice, but he believed that only a democratic republic could achieve an egalitarian commonwealth. Since every man has a "right to work," the state must provide employment and aid the aged and sick. It would accomplish these aims through establishing "social workshops"—producers' cooperatives, organized on a craft basis. The workers would manage these workshops, share in the profits, and repay the government loan. Eventually, the worker-owned factories, farms, and shops would replace those that were privately owned. Thus the whole process of production would become cooperative.

Though Marx criticized Blanc's ideas as utopian, French workers of the 1840s were intrigued by them. In 1846 there was a widespread demand for national workshops, and by 1848 "the organization of labor" had become a popular slogan. Articles in La Réforme, a radical newspaper, popularized Blanc's proposals among the workers, who adopted them as a practical reform program.

Blanc supported the cause of liberals throughout Europe. In 1841 in Histoire de dix ans, 1830-1840 (History of Ten Years, 1830-1840), he denounced King Louis Philippe's foreign policy as pusillanimous. France, he thought, had missed a golden opportunity in 1830 to give Europe liberal institutions.

A member of the provisional government formed on Feb. 24, 1848 (after the fall of the July Monarchy), Blanc persuaded his colleagues to guarantee the right to work, to create national workshops, and to establish the Luxembourg Commission to study and propose social experiments. But the national workshops became a makeshift relief program, a mockery of Blanc's ideas, and the government rejected his proposal for a ministry of labor.

By the middle of May, the coalition of right-and leftwing republicans, which had overthrown the Orleanist regime, collapsed. Though Blanc had been elected to the conservative National Assembly, that body expelled him from the government in May. It also abolished the Luxembourg Commission and on June 21 closed the workshops. These actions provoked a workers' revolt, which Gen. Cavaignac suppressed during the bloody June Days, and the ensuing reaction forced Blanc to seek asylum in England. While in exile he wrote a 12-volume history of the French Revolution to 1795 and a history of the Revolution of 1848. Blanc returned to France in 1871 and entered the Chamber of Deputies. There he led a futile fight for a radical constitution, opposing the one that was eventually adopted in 1875. In January 1879 he climaxed his long career by persuading the Assembly to grant amnesty to the Communards of 1871. Blanc died at Cannes on Dec. 6, 1882.

Most of Blanc's historical works and correspondence are available in English editions. The best critical study of the man and his work, in any language, is Leo A. Loubére, Louis Blanc: His Life and His Contribution to the Rise of French Jacobin-Socialism (1961). For an evaluation of the 1848 workshops see Donald Cope McKay, The National Workshops: A Study in the French Revolution of 1848 (1933). J. P. Plamenatz, The Revolutionary Movement in France, 1815-1871 (1952), traces the rise and fall of the alliance of moderate and radical republicans which established the short-lived Second Republic.

Loubáere, Leo A., Louis Blanc, his life and his contribution to the rise of French Jacobin-socialism, Westport, Conn.: Greenwood Press, 1980, 1961. □

Radicalism , The word radical has a number of meanings, one of which involves “getting to the root of the matter.” This analogy is helpful in focusing attention o… Peterloo Massacre , Synopsis The Peterloo Massacre took place at St Peter's Fields, Manchester, England, on 16 August 1819. (The name was an ironic reference to the Batt… Napoleon Iii , Napoleon III NAPOLEON III prince-president of the republic the second empire conclusion bibliography NAPOLEON III (Louis-Napoleon Bonaparte, 1808–187… February Revolution , February Revolution, 1848, French revolution that overthrew the monarchy of Louis Philippe and established the Second Republic. General dissatisfacti… John Cartwright , Cartwright, Major John (1740–1824). The ‘Father of Reform’ was a Lincolnshire squire who devoted the best years of his long life to radical agitation… Spartacus Party , BIBLIOGRAPHY The Spartacists amounted to a small group of radical socialists who split off from the German Social Democratic Party (SPD) during World…