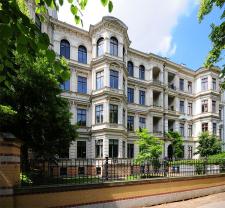 Ferdinand Lassalle was a nearly legendary figure in the history of the German working-class movement; his influence went far beyond his theoretical, organizational, programmatic, or practical contributions, none of which was either significant or long lasting. His less than two-year association with one of the earliest worker associations in the post-1848 era, the Allgemeiner deutscher Arbeiterverein (ADAV), from 1863 to 1864, left little organizational or programmatic legacy, but he continued for decades to be heralded by much of the rank and file as one of the founders of the movement.

Although he never trained in law, Lassalle first made a name for himself in the German courts. In the 1840s, he successfully defended the great poet Heinrich Heine (1797–1856) in an inheritance case and later won even more renown for his part in a long, complicated, and embarrassing divorce case involving Countess Sophie von Hatzfeldt (1801–1885). Thus when in the late 1850s Lassalle began taking public positions with regard to the workers, he was already a well-known figure. What appealed most to the emerging working-class movement in Lassalle's writings was his opposition to an alliance between the liberals and the workers and his call for universal male suffrage. Thus in 1863 when a group of Leipzig workers established the ADAV independent workers organization, they issued an invitation to Lassalle to attend the founding congress, hoping that his presence would counter the influence of liberals who sought to keep the workers politically dependent.

Even with the flamboyant and famous Lassalle as president, the ADAV never met with great success; by 1868, it had fewer than 8,000 members, less than a quarter of the number Lassalle had originally predicted. Furthermore, he seems to have advocated universal male suffrage largely as a tactical move, hoping to promote civil war when the bourgeoisie reacted to the loss of its special status. His conception of democracy had more in common with the Jacobin notion of some vague collective will than with representative democracy in a parliamentary sense. Furthermore, late in his life, Lassalle made overtures to the Prussian government about the possibility of having the state finance workers' cooperatives as a means of over-coming what he saw as the "iron law of wages," which kept workers permanently poor under the reign of capitalism. He even met personally with Otto von Bismarck (1815–1898) in hopes of convincing the Iron Chancellor that he could win the support of the workers against the liberals by pledging such support for cooperatives. However, Bismarck soon realized that he did not need, nor could Lassalle deliver, the support of the workers, so nothing came of the negotiations.

Eventually, the party that grew out of the 1869 merger of the ADAV and its rival organization, the Verband deutscher Arbeitervereine (VDAV), drew much more heavily in doctrinal and organizational terms from the latter than the former. The Sozialdemokratische Arbeiterpartei (SDAP) was much more heavily influenced by August Bebel (1840–1913) and Wilhelm Liebknecht (1826–1900) and their form of Marxism than by Lassalle. In 1891, this party adopted the name Sozialdemokratische Partei Deutschlands (SPD). It was a parliamentary party that soon became the largest party in Germany, having moved far away from Lassalle's notion of Jacobin democracy and state-financed workers' cooperatives. The workers' movement of which the SPD was the central element eventually also encompassed workers' cooperatives, a massive system of newspapers and journals, and a vast array of workers' social, athletic, and cultural clubs, and had very close ties with the so-called free trade unions.

Ironically, Lassalle's single significant theoretical contribution to the German movement, Herr Bastiat-Schulze von Delitzsch, der ökonomische Julian, order: Capital und Arbeit (1864), while ostensibly an attack on the liberal-worker alliance Lassalle so opposed, was probably more important for its popularization of Marxian concepts, albeit in somewhat distorted form. In this work, Lassalle dealt with the historical developmental tendencies of capitalism in a way that helped open the door to reception of works by Karl Marx (1818–1883) and Friedrich Engels (1820–1885). However, Marx and Engels were never grateful for this and consistently saw Lassalle as an ideological opponent.

Lassalle died young, killed in a silly, if romantic, duel over a woman. His reputation benefited, perhaps, from his dying young, as have those of so many other legendary figures; had he lived longer, the inadequacies of his positions would have been revealed. However, his call in 1863 for workers to break with their former liberal allies touched a sympathetic chord among the many increasingly class-conscious workers. He also impressed many of the same people with his flamboyance, his fashionable dress, and his hobnobbing with the famous and powerful. Such style was generally lacking among other leaders of the emerging workers' movement, which probably helps explain why Lassalle, despite having contributed so little of substance, was so fondly remembered for so long by so many in the movement.

The German socialist leader Ferdinand Lassalle (1825-1864) is considered the founder of the German Social Democratic party and a major theoretician of "scientific" socialism.

Ferdinand Lassalle, whose real name was Lasal, was born in Breslau on April 11, 1825, the only son of a wealthy Jewish silk merchant. While still a boy, he rejected both Judaism and a career in the family business for what he felt was the freedom of secular thought and demanded an academic career.

Lassalle changed his last name purportedly to give it a French (that is revolutionary) sound, an action that has been described as characteristic and symptomatic of his posturing personality. Virtually all commentators, including those most sympathetic to Lassalle and his program, agree that, while he was one of the most romantic and colorful figures in modern politics, he was also a rather foppish and quixotic person of colossal vanity and arrogance.

Lassalle studied at the universities of Breslau and Berlin where he became enthralled with the philosophy of G. W. F. Hegel and was convinced that the Hegelian "World Spirit" was realizing itself in the current age through himself.

As the prosecutor in a lengthy and much-publicized divorce suit (1846-1854), which Lassalle entered out of his hatred of aristocratic and male privilege, he became famous. During this period he acquainted himself with Karl Marx's writings and developed his own theory of socialism, which is sometimes described as "state socialism," although many of his followers deny that he was an adherent of that brand of socialism. Nevertheless, he denied—in contrast to Marx—that the bourgeoisie must be totally destroyed and also emphasized the positive role of nationalism. He thus generally advocated state action rather than revolution, that is, a take-over—not destruction—of the bourgeois state by a workers' party, and favored a state system of workers' cooperatives.

At the conclusion of the lawsuit, Lassalle became the teacher and political leader of the emerging German labor movement. He advocated universal suffrage as the means by which the workers could force the bourgeois state to turn over to them the entire fruit of their labor and not just a percentage of it. Trade union activity, as he saw it, would be of little or no use in itself. The working class embodied the spirit of the people, whose higher will was manifest in the state. Labor could emancipate itself only through capturing the concentrated political power found in the machinery of the state.

Lassalle's chief significance, however, was in the realm of practical politics rather than in theory. He laid the groundwork for the modern German Social Democratic party. In 1862 he drew up the Program for the Workingman, a document similar to Marx and Engels's Communist Manifesto. The following year his General Association of German Workers was formed, the lineal ancestor of the Social Democratic party.

In 1864, however, before the party had grown beyond a few thousand members, Lassalle became involved in a dispute over a girl half his age, which led to a duel. He was killed before he managed to draw his pistol, on Aug. 28, 1864.

Leading biographies of Lassalle are Arno Schirokauer, Lassalle: The Power of Illusion and the Illusion of Power (trans. 1931), and David J. Footman, The Primrose Path: A Life of Ferdinand Lassalle (1946). An account of Lassalle's life is in Edmund Wilson, To the Finland Station (1940). For a brief but substantial account of Lassalle's theory see Alexander Gray, The Socialist Tradition: Moses to Lenin (1946). □

Production , Productivity is the ratio of output (goods created or services performed) to input (all costs of production, including workers’ wages and costs requi… Social Worker Jobs , How to Become a Social Worker Social workers perform some of the most diverse and important jobs today. Social worker careers are a great fit for peo… Byssinosis , Definition Byssinosis is a chronic, asthma-like narrowing of the airways. Also called brown lung disease, byssinosis results from inhaling particles… New Working Class , new working class new working class A term associated with the thesis that process workers in automated industries, and white-collar workers in large… Dolores Fernandez Huerta , One of the most influential labor leaders of the twentieth century, Dolores Huerta's accomplishments include economic, social, and political gains fo… Strikes , A strike is an organized stoppage of work. With the rise of factories during the Industrial Revolution , businesses acquired great power over the liv…