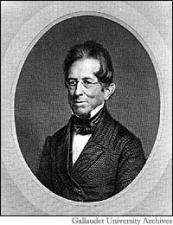 Thomas Gallaudet was born in Philadelphia on Dec. 10, 1787. His family moved to Hartford, Conn., where he attended grammar school. He entered Yale College as a sophomore in 1802 and graduated the youngest in his class and with highest honors. He then tried his hand at law, teaching, and business but finally decided on the ministry. He attended Andover Theological Seminary from 1811 to 1814.

As a new pastor, Gallaudet encountered a deaf-mute child, Alice Cogswell, whose father set about to establish a special school for children like his daughter. Enlisted in the project to formalize this kind of education in America, Gallaudet went to Europe in 1815 to study established systems of symbolic instruction. He investigated the Braidwood method used in London and Edinburgh. Learning of advanced techniques practiced by Abbé Sicard with deaf-mutes in Paris, Gallaudet visited him and mastered his methods. When Gallaudet returned to the United States in 1816, accompanied by one of Sicard's assistants, he began seeking financial support for a school for the deaf and mute which had already been incorporated by the Connecticut Legislature. The school, inspired by the ability of Alice Cogswell to overcome her handicap, opened in Hartford in 1817.

Gallaudet's direction, writings, and public appearances made the school successful. By 1830, when ill health forced him to retire, the school had 140 pupils, and its effectiveness had drawn public notice throughout the United States.

Gallaudet turned down offers to join university faculties or to lead other special schools so that he could devote himself to writing books for young children and promoting popular education. He worked on a speller and a dictionary and wrote Book on the Soul (1831), Scripture Biography (1833), and Everyday Christian (1835). These, along with numerous journal and magazine articles, gained him worldwide recognition.

The care of the insane became Gallaudet's new interest. In 1838 he became chaplain to the Retreat for the Insane in Hartford. From 1837 to 1844 he was also a volunteer chaplain of the Hartford county jail.

In 1821 Gallaudet had married Sophia Fowler, a deaf-mute and former pupil. They had eight children, one of whom, Edward, participated in founding the Gallaudet College for the deaf in Washington, D.C. Thomas Gallaudet died in Hartford on Sept. 10, 1851.