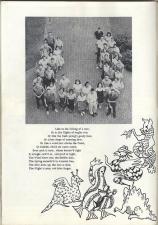 American philosopher and educator Boyd Henry Bode (1873-1953) was a leading spokesman for pragmatism in the philosophy of education. He supported progressive education, but criticized its excesses and opposed educational theories that he thought were undemocratic.

Boyd Henry Bode was born on October 24, 1873, to Dutch immigrant parents in rural northern Illinois, and he grew up in Grundy County, Iowa, where his father was a minister in the Christian Reformed Church, an offshoot of the Dutch Reformed Church. Bode's upbringing as a rural immigrant minister's son left a permanent imprint on his thinking. Although the father-son relationship was amicable and respectful, Bode was later to reject authoritarian religion on philosophical grounds.

Bode was the eldest of eight children and the only child allowed to pursue extensive formal education. He attended elementary school in Wellsburg, Iowa, and high school in Steamboat Rock, Iowa. He received B.A. degrees at Penn College and the University of Michigan, and eventually earned the Ph.D. at Cornell University in 1900. Upon graduation Bode entered college teaching in the department of philosophy at the University of Wisconsin.

Bode began his teaching career as a philosophical idealist and a critic of the American philosophy of pragmatism, but gradually he became persuaded that pragmatism was the philosophy of America's future. The pragmatic view that truth comes out of human experience rather than through revelation and contemplation appealed to him. Pragmatism's support of science and experimentation to arrive at workable solutions to human problems also appealed to his developing philosophical point of view. In addition, pragmatism's championship of democracy, particularly as this was demonstrated in the works of John Dewey, fed Bode's own desires to bolster democratic institutions and to secure a more democratic American society.

Bode believed that the American experiment of democratic rule was the hope of the future. He advocated "Americanization" not only of the immigrants, but of other Americans, too. Too many Americans, new and old, were ignorant of democratic principles and ideals. All must be educated in the principles of democracy, not static principles frozen in historical time, but living principles that grew out of the people's experience. It was through a growing democracy and the proper understanding of American history and traditions that the common people would find their rightful place. Democracy became Bode's philosophical and educational theme.

As he was to write later in Democracy As a Way of Life (1937), Bode thought that democracy would result in freeing people's intelligence and that freed intelligence would, in turn, create more and better democracy. In addition, the great strides made in science showed that science was the primary method or tool of intelligence; therefore, mankind should apply science to the problem of how to live more democratically. In Bode's view, however, science could also be misused—as it often was in times of war, for example—and so there was a need for philosophers to help people think more deeply about how they used scientific knowledge and other kinds of knowledge. Thus, democracy and intelligence went hand in hand, and science and philosophy had major roles in helping achieve greater democracy and intelligence.

Progressive education had many different kinds of supporters and advocates with varied points of view and it lacked any systematic, unifying philosophical foundation. Bode's initial approach to progressive education was as a critic, but one not totally unsympathetic to the movement. He sought to give progressive education a philosophical base, which he felt should involve translating "pragmatic philosophy into educational procedures." At least some aspects of progressivism, he wrote in Progressive Education at the Crossroads (1938), were too much drawn to romanticism and to sentimentality about children and the spreading of "sweetness and light." What was needed was a further underpinning of those progressive emphases on the individual, avoidance of imposition, and the securing of the free play of intelligence—all of which, Bode argued, reflected wider societal needs of the common man and the demands of democracy. Unless progressive education recognized these democratic imperatives, it would have no guiding principles. In short, progressive education had the choice of "becoming the avowed exponent of democracy or else of becoming (only) a set of ingenious devices…."

In his efforts to give progressive education a philosophical base, Bode chided the progressives for some of their positions. To the progressive rubric that teachers should "teach the child and not the subject," Bode replied that the traditional subjects stood for an educational value that we neglect at our own peril. If intelligence is to become free, he argued, it must understand how concepts are formed and what counts for evidence and truth, things which traditional subjects, if approached in the right way, help provide. While progressive education had made great strides toward moving education away from the authoritarian imposition of an earlier time, it needed to become more secure of its own aims.

To Bode, what was needed was a recognition that the great strides made in science and technology had created a "culture lag," where institutions and outlooks had not kept pace. In former times the young had been brought up with beliefs that reflected the world about them, but this was no longer the case. The great changes of science and technology had called into question the old values and beliefs, and, consequently, the young were growing up disillusioned and aimless. Education's function, then, was to help the young understand these value contradictions by transmitting the achieved values of civilization so that the young could see the contradictions and make intelligent value choices. A basic problem for the schools, then, was to help the young make sense out of a confused cultural heritage and to help them construct a philosophy of life. As the effects of the depression, the spread of totalitarian governments, and World War II took their toll, Bode became even more convinced that the schools must vitalize the meaning of democracy. What was needed was to educate the young in how to think.

Critics of Bode's philosophy of education have pointed to the lack of precise detail on how his ideas could be achieved. Furthermore, Bode has been criticized for a failure to set forth in exacting language the kind of curriculum he envisioned for the schools. However, Bode maintained that a democratic way of life is based on growth and change, rather than pre-determined, unchanging maxims. If democracy is truly based on growth and change, then it is futile to attempt to be too exact. Bode did, however, express strong convictions about the need for democracy and the power of a proper education to enable people to think more clearly. He insisted that "form follows function," or outcomes follow action, and so the results that flow from sound thinking cannot be pre-established in any exact sense.

Bode retired from full-time teaching in 1944, but he continued to write, give an occasional lecture, and sometimes teach a summer session course until shortly before his death in 1953. Throughout his life as a philosopher and educator Bode exhibited a sturdy faith in democracy, human intelligence, and the power of education. His belief in the connection of these three things are his legacy to the contemporary world.

An interesting biography is Robert B. Bullough, Jr., Democracy in Education: Boyd H. Bode (1981), in which sections of the book are written in imaginative dialogue format, depicting conversations Bode actually had or may have had with his philosophical peers. Perhaps the best critical review of Bode's philosophy is J.J. Chambliss, Boyd H. Bode's Philosophy of Education (1963). Bode himself was the author of many articles and books. The two books which probably best illustrate his philosophical themes and emphases are Democracy As a Way of Life (1937) and Progressive Education at the Crossroads (1938).

History Of Philosophy , Philosophy, History of The history of philosophy is a special branch of the general history of culture whose object is the critical study of the form… Neoplatonism , General Characterization Neoplatonism was the dominant philosophical current in late antiquity, and it had a lasting influence in the Middle Ages whe… Leo Strauss , Strauss, Leo STRAUSS, LEO Leo Strauss (1899–1973) was the most influential political philosopher of the twentieth century as well as its most extraor… Jacques Maritain , Maritain, Jacques MARITAIN, JACQUES French Catholic philosopher; b. Paris, Nov. 18, 1882; d. Toulouse, April 28, 1973. Maritain was one of the great… Ellwood Patterson Cubberley , Ellwood Patterson Cubberley Ellwood Patterson Cubberley (1868-1941), an early 20th-century educator and university dean, wrote influential textbooks… Eclecticism , Ancient eclecticism, according to the second century c.e. doxographer Diogenes Laertius, began with Potamon of Alexandria, who broke with traditions…