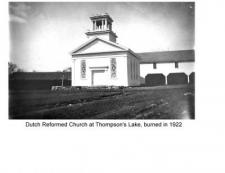 oxford
views updated
Dutch Reformed Church or Hervomde Kerk. Major Christian (Protestant) Church, originally in the Netherlands, but spreading to other parts of the world through missionary work. It was organized during the revolt of the Low Countries against Spain in the 16th cent. Many different threads of Reformed theology and church order were entangled together until the Synod of Dort (1618–19) led to the character of the Church as Calvinist in theology and Presbyterian in government. The synod produced the Canons of Dort, which became one of the doctrinal foundations of the Dutch Reformed Church. The synod was involved in political contest, and was directed against the Arminians or Remonstrants (so-called because in 1610 the followers of Arminius issued a remonstrance against unconditioned predestination). The Remonstrants were ejected, and in the 17th cent., during a period of Dutch power, the Dutch Reformed Church was of central importance. During the 19th cent., the prolonged struggle between conservative and modernizing tendencies led to several splits (e.g. the Afscheiding (‘Separation’) in 1834, the Doleantie in 1886, forming with the earlier separatists the Gereformeerde Kerk), but the Dutch Reformed Church remained the largest. Meanwhile it had spread with colonization to the E. and W. Indies, and through settlement to the USA. Its most prominent settlement was in S. Africa, from 1652. When the Cape Colony came under British control, the Dutch, the Boers, trekked north and formed their own states, Orange Free State and Transvaal—carrying with them strong biblical associations with the move into a Promised Land. Equally biblical in its claimed foundations was the view (originally formulated in the Netherlands to justify the apparent anomaly of divisions in that territory) of apartheid. Apartheid as a religious doctrine rests in a debate in one of the 19th-cent. separatist churches, the Nederduitse Gereformeerde Kerk: in 1829, its synod declared that people of different colours (i.e. races) should receive communion together, but in 1857 its synod ruled that because of the weakness of some, segregation should be allowed. In 1974, the NGK produced a report, Human Relations and the South African Scene in the Light of Scripture, which offered justification of apartheid, but in 1982, the World Alliance of Reformed Churches declared apartheid to be heretical. An amended position appeared in Church and Society (1986), but it did not eradicate apartheid. At this stage, two groups (Nederduitsche Hervomde Kerk and Afrikaanse Protestante Kerk) seceded and refused to attend the consultation in 1990 which led to the Rustenburg declaration. This made a confession of guilt for the damage done by apartheid and proposed forms of restitution.

Anticlericalism , Anticlericalism was both a widespread attitude and a deeply ingrained sentiment among Latin America's intellectual and political elites who viewed or… Puritanism , Puritanism was a Protestant reform movement that developed within the Church of England in the 1500s. It had a major influence on English social, pol… Cyril Lucar , Lucar, Cyril (1572–1638). Patriarch of Constantinople from 1620. His earlier experiences in church politics had turned him against Rome, and in corre… Congregationalism , Congregationalism ★453 ★ Congregational Union of Canada (Defunct) (The Congregational Union of Canada no longer exists as a separate entity. It is no… Heinrich Bullinger , Bullinger, Heinrich (1504–1575) BULLINGER, HEINRICH (1504–1575) BULLINGER, HEINRICH (1504–1575), Swiss reformer, theologian, and church leader. Born… Free Church Of Scotland , Free Church of Scotland Free Church of Scotland. This issued from the Disruption of 1843, when those unable to accept the infringements of the Church…