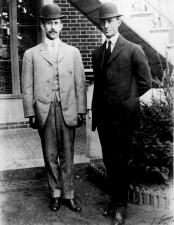 Elizur Wright (1804-1885) was an American reformer whose interests ranged from abolition to woman's suffrage and to conservation. He was also an intensely practical man as much at home in a government bureau as on the speaker's stump.

Elizur Wright, born in Connecticut on Feb. 12, 1804, was descended from moderately prosperous and typical New England Yankees. His parents moved to Tallmadge, Ohio, when Elizur was six, clearing a farm from the forest and gradually prospering as farmers. After attending a local school, Wright entered Yale University. In 1829 he returned to Ohio to teach at Western Reserve College.

Under the influence of William Lloyd Garrison and Theodore Weld, Wright became a leading abolitionist at Western Reserve. With several others, he lost his job, for abolitionism was still regarded as a dangerous heterodoxy, even in the North.

Weld secured a position for Wright as secretary to the New York Antislavery Society. In 1833 Wright took the same position with the American Antislavery Society and, in 1835, became editor of the Quarterly Antislavery Magazine. For all his external placidity, Wright was a stormy, tenacious fighter. He split from his employers on the question of third-party action and lost his position.

Remarkably resourceful, Wright published and attempted to sell his own translation of the French writer La Fontaine. The venture was not very successful financially, but it brought Wright into contact with many of the celebrated literati of the day and took him to England in 1846. Back in the United States, he founded a successful antislavery, antitariff newspaper, the Weekly Chronotype, but his interests had changed significantly. He became interested in the reform of life insurance then beginning in England; meanwhile, old interests in mathematics and statistics drew him to what was to be his chief field of endeavor.

Though Wright never completely neglected his antislavery interests (acting as the defendant in an important fugitive slave case in 1852), he increasingly turned to life insurance. When he discovered and prepared to publish an exposé of the fraudulent practices of the then largely corrupt business, several companies attempted to buy him off, only to discover that he applied the same fervor and integrity to this project as he had to abolition. He prepared actuarial tables which became the basis for setting premiums and payments of even those companies that were initially hostile, and lobbied successfully for laws to regulate life insurance company policies. He became Massachusetts commissioner of insurance in 1858. In that position he designed other laws and policies governing the business, but in 1866 he lost his job. He continued to work in the business in a private consultation capacity until his death on Nov. 21, 1885. As one eulogist wrote, Wright's reforms "have formed a sort of constitution by which the policy of all life insurance companies is still guided." There is no doubt that his interest improved the ethics and the efficiency of the business.