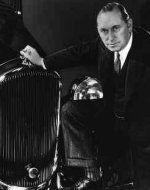 
Walter Percy Chrysler (1875–1940) was an industrialist who began his career in the railroad industry. He later became involved in the automotive industry and was largely responsible for the Buick division of General Motors. He went on to found his own company, Chrysler Motors, which quickly rivaled its competitors General Motors and Ford Motor Company.

Walter Chrysler was born in Ellis, Kansas, in 1875. His father was an engineer for the Union Pacific Railroad. As a boy, Chrysler worked at various odd jobs, as a farm hand, a grocery boy, and a silverware salesman. At the age of seventeen he joined his father and became an apprentice at the Union Pacific shops. Chrysler earned five cents per hour and was eager to learn every aspect of his craft. He earned his journey-man's certificate and then worked as a machinist in several railroad shops throughout the Midwest.

Chrysler gradually moved up into positions of greater responsibility. At the age of thirty-three he became superintendent of the Chicago and Great Western Railroad system. During this time, Chrysler and his family lived in Oelwein, Iowa. He began to notice the new automobiles on the streets of town. He became more interested in them when he attended the 1905 Chicago automobile show and saw the Locomobile. The car cost $5,000; Chrysler borrowed more than $4,000 to purchase it. He took it home to Oelwein, but did not drive it around town. Instead, he took the car apart and put it together again several times.

His position at Great Western was an impressive job for a young man, but Chrysler aspired to move up the corporate ladder. He realized that he would have few opportunities to do so in the mechanical branch of railroading, so he switched industries. In 1910 Chrysler became the works manager of the American Locomotive Company in Pittsburgh at a starting salary of $8,000 per year. During the same year, Charles W. Nash, who was just made president of General Motors Corporation, became aware of Chrysler's efficient management of American Locomotive. In 1912 Nash persuaded Chrysler to take a salary cut and accept the position of works manager of Buick in Flint, Michigan.

Since cars at Buick were being made by slow, handwork methods, Chrysler quickly reorganized the shops into efficient units, introducing Henry Ford's assembly line method of production. Output levels soared. From 1911 to 1919, when Chrysler was in charge of Buick, car production rose from 40 to 550 cars per day; the company's profits increased just as dramatically.

In 1916 William C. Durant (1861–1947) returned as president of General Motors and appointed Chrysler president of Buick at an annual salary of $500,000 dollars. Chrysler, however, was unhappy under Durant's leadership. He disapproved of Durant's management decisions and felt he was interfering unnecessarily in Buick's business affairs. In 1920 Chrysler decided to resign from General Motors and planned to retire.

Chrysler's retirement plans were short-lived as he was quickly persuaded by Chase National Bank to rescue the automotive company of Willys-Overland from bankruptcy. Chrysler's salary for this project was a yearly $1 million. Chrysler soon took on a similar task of reorganizing the Maxwell Motor Company. With the help of three talented engineers from Willys-Overland, Fred Zeder, Owen Skelton, and Carl Breer, Chrysler designed and produced his first car, the Chrysler, in June of 1925, at the Maxwell plant. In 1924 the Maxwell Company was rechartered as the Chrysler Corporation.

Popular demand for the Chrysler fueled the company's growth. First-year sales were 19,960; by 1926 sales had jumped to 129,572 The business grew when Chrysler introduced the Plymouth and the DeSoto in July of 1928. In the same month he purchased the Dodge Brothers manufacturing company and became the second largest automobile producer in the world, with business interests valued at approximately $432 million. In 1928 Chrysler Corporation became Chrysler Motors. The relatively new company was a major player in the automotive industry. The strength of the Chrysler Corporation challenged the traditional competition between Ford Motor Company and General Motors—the "Big Three" became a reality.

During the Great Depression, Chrysler adopted a survival strategy which focused on reducing debt and improving the existing line of cars—the Chrysler, DeSoto, and Plymouth. When the demand for cars began to rise again in 1937, the company was in a secure position and soon resumed its growth. Much of Chrysler's success was due to his ability to grow with his job. He became as skillful with finance and marketing as he was with production. Walter Chrysler retired in 1935 and died five years later.

Fucini, Joseph J., and Suzy Fucini. The Men and Women Behind Famous Brand Names and How They Made It. Boston: G.K. Hall and Company, 1985.

it devolves upon the united states to help motorize the world.

The American manufacturer Walter Percy Chrysler (1875-1940) was a self-trained engineer who formed one of the three major automobile companies in the United States.

The son of a Union Pacific Railroad engineer, Walter Chrysler was fascinated by machinery at an early age. He turned down a chance to go to college to become an apprentice in the Union Pacific shops at Ellis, Kans. Hard-working, intelligent, and determined to master every aspect of his craft, Chrysler then worked as a machinist in a series of railroad shops throughout the Midwest. Moving into positions of greater responsibility, he emerged in 1910 as superintendent of motive power for the Chicago Great Western Railroad. As an official in the mechanical branch of railroading, Chrysler knew he had little chance of moving into the top echelons of the corporate structure, and so in 1910 he took a position as works manager of the American Locomotive Company in Pittsburgh, beginning at a salary of $8,000 per year.

At this time General Motors Corporation, formed by William C. Durant in 1908, was in financial difficulties. In order to avoid bankruptcy for the $60-million group of plants manufacturing both automobiles and components, a syndicate of bankers holding GM securities forced Durant out in 1910 and made Charles W. Nash, a self-trained engineer, president. Aware of Chrysler's efficient management of American Locomotive, Nash in 1912 persuaded Chrysler to become works manager of Buick at a cut in salary from $12,000 to $6,000.

Production methods at Buick were inefficient and expensive because cars were still being made by slow, hand-work methods traditional in the manufacture of expensive carriages. Chrysler immediately reorganized the Buick shops into efficient units centered on construction by machinery and introduced the production-line method of automobile building inaugurated by Henry Ford. The results were impressive. The output of cars rose from 45 to 200 per day. At the same time Buick was chiefly responsible for a rise in GM's profits from $7 million to $28 million between 1913 and 1916.

Through skillful financial manipulations, Durant returned to the presidency of GM in 1916 and appointed Chrysler president of Buick at a salary of $500,000 per year, payable largely in stock. During the next 4 years production surged ahead, and Buick continued to provide most of the profits for GM. But Chrysler found Durant's interference in Buick's affairs increasingly irritating. He disapproved strongly of Durant's wholesale purchase of new plants for GM, some of them of marginal value to the combination, financially unstable, and difficult to integrate into GM's operations. Finally, in 1920 Chrysler resigned, intending to retire on his considerable savings. But in 1922, at the behest of a banking syndicate, he took on the job of salvaging the Willys-Overland Company from bankruptcy at a salary of $1 million per year.

An important part of the recovery program was the designing of a high-performance car in the $1,500 range which would compete with luxury cars selling for $5,000 and up. Shortly after the start of the Willys-Overland undertaking, Chrysler accepted responsibility for a similar reorganization of the Maxwell Motor Company. Through the efforts of three capable engineers the new Chrysler car was completed at the Maxwell plant in 1924 and exhibited in New York.

Public enthusiasm for his new car enabled Chrysler to raise the funds to get it into mass production, and in 1925 the Maxwell Company was rechartered as the Chrysler Corporation. Because of increasing demand for the car, Chrysler purchased the Dodge Brothers Manufacturing Company in 1928. Capitalized at approximately $432 million, Chrysler Corporation was the second-largest automobile producer in the nation.

During the Depression, Chrysler followed a policy of rigorous reduction of debt and improvements on the line of cars—Chrysler, DeSoto, and Plymouth. Thus by 1937, when demand surged back, the company was in a secure position.

A bluff, abrupt man, Chrysler nevertheless had a warm, outgoing personality which enabled him to make and keep friends even in times of disagreement. His success was due primarily to his ability to rationalize production, cut costs to the bone, and constantly improve his product. Moreover, he showed a remarkable ability to grow with his job. During his automotive years he became as adept at managing the financial and marketing ends of his business as in the actual production of automobiles. He retired in 1935 and died 5 years later.

The most detailed information on Chrysler is in his autobiography, written with Boyden Sparkes, Life of an American Workman (1938). Chrysler describes his managerial methods in B. C. Forbes and O. D. Foster, Automotive Giants of America: Men Who Are Making Our Motor Industry (1926). Thomas C. Cochran gives an excellent account of Chrysler's business career in John A. Garraty, ed., The Unforgettable Americans (1960). Chrysler's years at Buick and the history of the Chrysler Corporation receive good coverage in two volumes by John B. Rae, American Automobile Manufacturers: The First Forty Years (1959) and The American Automobile: A Brief History (1965). □