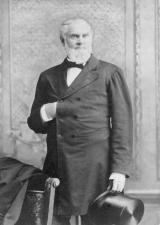 Howard was the son of Ossian Gregory Howard and Lucy Duham Thurber. When he was two years old, his parents moved to Ithaca, New York, where in 1873 he entered Cornell University, studying with John Henry Comstock, the eminent entomologist. In 1878 Comstock secured him a position as assistant to Charles Valentine Riley, chief of the Division of Insects in the United States Department of Agriculture and the foremost applied entomologist in the country. Upon Riley’s resignation in 1894, Howard became chief of the division (later called a bureau), a position that he retained until 1927.

Howard shared in the burgeoning importance that applied entomology assumed at this time, when insects like the boll weevil (1894), the gypsy moth (1889), the San José scale (1893), and, at the turn of the century, the mosquito (in transmitting yellow fever and malaria) came to public notice. He traveled widely, visiting the bureau’s field stations in the United States and keeping in touch with colleagues in Europe, as well as attending meetings and congresses. He received many honors and shared fully in the cultural and scientific life on both sides of the Atlantic.

Howard was permanent secretary of the American Association for the Advancement of Science from 1898 to 1920, was its president in 1920, and presided at the Fourth International Congress of Entomology in Ithaca, New York, in 1928.

Howard’s administrative activities covered nearly every aspect of applied entomology, but he was particularly interested in biological control and medical entomology. He likewise studied the taxonomy of parasitic Hymenoptera, describing forty-seven new genera and 272 new species, as well as twenty-two new species of mosquitoes, the latter in collaboration with Harrison Gray Dyar and Frederick Knab.

Howard married Marie Theodora Clifton in 1886; they had three daughters. His wife died in 1926. A year later he retired, but continued to serve for four years as consultant on matters concerning biological control of insects. Under Howard’s leadership, the entomological work of the Department of Agriculture grew from an annual budget of $30,000 to over $3,000,000. His organization of the entomological division endured for a quarter century after he retired, and today is still reflected to some degree in the entomological work of the department. During the latter years of his administration, Howard was probably the world’s foremost entomologist.