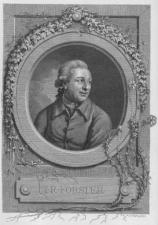 Forster was descended from a landed Yorkshire family that had emigrated to Germany about 1642. He was educated at Marienwerder and Berlin in 1743–1748 and then, against his wishes, as a Reformed clergyman at the University of Halle in 1748–1751. He became pastor at Nassenhuben (or Nassenhof), near Danzig, in 1753.

Forster began to maintain a wide scientific correspondence with such men as the elder Linnaeus, Thomas Pennant, and, later, Joseph Banks. In 1765 he was commissioned by the Russian government top undertake a survey of the Saratov-Tsaritsyn region of the lower Volga. In 1766, deprived of advancement in Russia and of his pastorate in Prussia, Forster went to England and soon succeeded Joseph Priestley as a tutor at the Dissenters’ Academy in Warrington, Lancashire, teaching natural history and classical and modern languages.

Forster became known in Britain through his scientific writing. He was asked by the Royal Society of London to describe a collection presented by the Hudson’s Bay Company. His papers on zoology, ornithology, and ichthyology were published in the Philosophical Transactions of the Royal Society (1772, 1773). Reprinted by the Willughby Society in 1882, they were recognized as having been written by “one of the earliest authorities on North American zoology.” He published An Introduction to Mineralogy in 1768; two years later he issued A Catalogue of British Insects, and in 1771 he published works on American flora and on entomology. He also worked on the translation and editing of works on North America by the itinerant naturalists Peter Kalm and Nicholas Bossu and on Asia by Petrus Osbeck. In 1772 he published an edited translation of Bougainville’s Voyage autour du monde. On 27 February 1772 Forster was elected fellow of the Royal Society.

In June 1772 Forster and his son Georg, “gentlemen skilled in Natural history and Botany but more especially the former,” were appointed with ten days’ notice to H.M.S. Resolution, bound, under Captain James Cook, to search for the hypothetical southern continent. Linnaeus the elder commended Forster as an outstanding man for such a charge. At Cape Town, Forster took on as an assistant Anders Sparrman, one of Linnaeus’ pupils. The Forsters returned with Cook in the summer of 1775.

The voyage included a great part of the Pacific basin. In 1776 the Forsters published Characteres generum plantarum, a small, hurried, and preliminary account of the botany of the voyage. The remainder of the botanical specimens were dealt with later by Georg in Germany and by Daniel Solander privately. Forster’s most significant publication was Observations Made During a Voyage Round the World (1778), the sum of his work “on physical geography, natural history and ethnic philosophy.” Forster read deeply in the science of his day, including the work of Buffon and Torbern Bergman; he was able to test armchair hypotheses empirically against the facts of the field. The Observations is a remarkable systematic study of oceanographic, geographic, and ethnographic problems in the infancy of those sciences, a study characterized by perceptive observation, analogy, and experimentation. Forster predicted the scope and methods of Alexander von Humboldt’s work and, in the same region, investigated those phenomena (e.g., coral reefs and volcanoes) which Charles Darwin examined sixty years later on the Beagle voyage. Forster also influenced the work of Blumenbach and the growing science of comparative anthropology.

After moving to Halle in 1780 as professor of natural history and mineralogy, Forster published extensively on zoological subjects, many of them connected with the Resolution voyage. He was associated with Pennant in the translation and later editions of his Indian Zoology. From 1790 he edited the Magazinvon merkwürdigen neuen Reisebeschreibungen, which did a great deal to introduce the results of important scientific voyages to the German public. Forster published a history of northern maritime discovery in 1784. In the year of his death he published an essay containing his thoughts on a future theory of the history of the earth.

In 1844 H. Lichtenstein published Descriptiones animalium . . ., the zoological work of the Resolution voyage, which has since been attributed to Forster without reservation.

The whole of Forster’s scientific career was affected by a tragic quarrel with the British Admiralty. He was a man of pride and quick temper. The considerable scientific data assembled on the Resolution voyage was, for this reason, scattered throughout the world, and the scientific publications of the Forsters, although competent, were fragmentary and obscure. The real merit of Forster’s work has often been overlooked by authors more zealous to describe his weaknesses of character than to appraise his contribution to science.

No complete collection of Forster’s works or papers exists. His unedited correspondence is scattered in Australasia, London, Germany, North America, and many European centers. Published works besides those cited in the text include Florae Americae septentrionalis (London, 1771); Novae species insectorum centuria (London, 1771); Enchiridion historiae naturali inserviens . . . (Halle, 1788); and numerous translations of accounts of voyages, with his own scientific appendixes and commentaries. He also contributed to a number of Continental scientific journals. His MS journal of his voyage (6 vols.) is in the Stiftung Preussischer Kulturbesitz, Berlin.