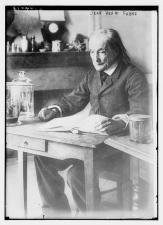 Fabre was the son of Antoine Fabre, an homme de chicane (a sort of law officer), and of Victorie Salgues. He began his studies at the parochial school of his native village, then continued them, beginning in 1833, at the collège of Rodez. A scholarship student at the École Normale Primaries in Avignon, he obtained his brevet supérieur in 1842 and was appointed a teacher at the lycée of Carpentras in the same year. At Montpellier he prepared for his baccalauréat, which he passed, and then earned a double licence ès sciences in mathematics and physics. He next went to the lycée of Ajaccio, Corsica, as a physics teacher, remaining there until December 1851. Following this he taught in the lycée of Avignon (1853), then received the licence in natural history at Toulouse, and finally defended his thesis for the doctorat ès sciences naturelles at Paris in 1854. Henceforth, Fabre devoted himself almost exclusively to the research on the biology and behavior of insects that was to make him one of the great figures of entomology.

In 1855 Fabre published his first work on a hymenopterous vespid (Cerceris) that paralyzes its prey (beetles). His second memoir (1857) was concerned with the hypermetamorphosis of the Meloidae (coleoptera). In 1856 Fabre was awarded the Prix Montyon (for experimental physiology) of the Institut de France, and in 1859 Charles Darwin cited him in his Origin of Species, a valuable encouragement for a poorly paid young teacher.

In an attempt to improve his financial situation, Fabre undertook a research on the coloring principle of madder (alizarin), which he succeeded in isolating in 1866. This discovery resulted in his being awarded the Legion of Honor, and he was received in Paris by Napoleon III. But on his return to Avignon, Fabre learned that alizarin had just been obtained from coal tars and that his process had been superseded. He turned to writing textbooks and gave a free course on the sciences, at the same time forming a friendship with the philosopher John Stuart Mill, who was then living in Avignon. A victim of various jealousies and vexations, Fabre left that city in November 1870 and moved to Orange, and then in 1879 to Sérignan. where he devoted all his time to observations on the life and habits of insects. On 11 July 1887 he was elected a corresponding member of the Académie des Sciences, and his jubilee was celebrated on 3 April 1910.

Fabre’s first marriage was to Marie Villard (30 October 1844); they had many children, including three sons and one daughter. Having become a widower shortly after moving to Sérignan, he remarried and had a son and two daughters by his second wife. One of his daughters married the physician G. V. Legros, who was his first biographer.

Fabre’s scientific work includes the ten-volume Souvenirs entomologiques (1879–1907), which presents a considerable number of original observations on the behavior of insects (and also of arachnids); these had been preceded by various memoirs published as books or periodical articles (1855–1879).

It is the latter group of publications that contains Fabre’s principal discoveries: hypermetamorphosis of the Meloidae; the relationship between the sex of the egg and the dimensions of the cell among the solitary bees; the habits of the dung beetles; and the paralyzing instinct of the solitary wasps Cerceris, Sphex, Tachytes, Ammophila, and Scolia.

These last researches, which posed the problem of instinct and its acquisition by insects, were much discussed and were the object of lively criticism by E. Rabaud. Recent works, such as those of A. Steiner (1962) on the wasp Liris nigra, which preys on crickets, confirm Fabre’s observations and show that the prey is a checkerboard of stimulating zones, each of which provokes a precise and practically unalterable response by the predator.

Although his works were admired by Darwin, Fabre was all his life opposed to evolution, remaining convinced of the fixity of species. For him, each animal species was created as we see it today, with the same instinctual equipment (whereas the modern explanation of instinct draws on the notion of natural selection).

Fabre had the great merit of demonstrating the importance of instinct among the insects, while certain of his predecessors (J. C. W. Illiger, Jean Th. Lacordaire) supposed that insects are endowed “with reasoning or inventing faculties comparable to those of the higher animals, and of man” (J. Rostand, “Jean-Henri Fabre,” p. 157).

Responsible for significant discoveries concerning the lives and habits of insects, Fabre remains especially important in the history of science because of the popularity of his Souvenirs entomologiques; reading them led more than one person to become a naturalist.

In addition, in order to earn a living, Fabre, between 1862 and 1901, wrote some forty works of scientific popularization, designed chiefly for the young and ranging from mathematics and physics to natural history.

He also composed poems in French and in Provencal; the latter resulted in his being called felibre di Tavan.

Fabre remains the very model of the self-taught scientist—solitary, poor, proud, and independent. He was also an attentive and minute observer and a writer of unquestionable talent.