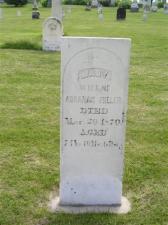 The description of Miller’s rise to prominence in the world of mathematics is one of those Horatio Alger stories with which American intellectual history of the late nineteenth century is studded. He was the son of Nathan and Mary Sittler Miller and a descendant of one Christian Miller who had emigrated from Switzerland around 1720. Unable to continue his education without self-support, he began to teach school at the age of seventeen. He studied at Franklin and Marshall Academy in Lancaster during 1882–1883, then enrolled at Muhlenberg College, where he received the baccalaureate with honorable mention in 1887, the master of arts in 1890, and an honorary doctor of letters in 1936. Miller served as principal of the schools in Greeley, Kansas, during the year 1887–1888 and as professor of mathematics at Eureka College (Illinois) from 1888 to 1893. Cumberland University in Lebanon, Tennessee, granted him a doctorate in 1892; it was then possible to do course work by correspondence, and examinations in advanced courses were an acceptable substitute for thesis requirements. Miller was offering the same courses toward a doctorate to his students at Eureka. He spent the summers of 1889 and 1890 at the Johns Hopkins University and the University of Michigan but probably did not come under Frank Nelson Cole’s influence until 1893, when he became an instructor at Michigan for three years and lived in Cole’s home during the first two years of that period. It was Cole who inspired him to pursue the research in group theory that was to engage his talents for the rest of his life. Cole, incidentally, had been a pupil of Felix Klein, who had made groups basic in his “Erlanger Programm.”

Miller spent the years 1895–1897 in Europe, attending the lectures of Sophus Lie at Leipzig and Camille Jordan in Paris. He soon was publishing papers independent of their specializations, although Lie had become instrumental in Miller’s study of commutators and commutator subgroups and Jordan’s interest in questions of primitivity and imprimitivity was reflected in Miller’s investigations of those problems throughout his career.

Upon Miller’s return to the United States, his European experience and mathematical productivity gained him an assistant professorship at Cornell (1897–1901). This was followed by an associate professorship at Stanford University (1901–1906), and in 1906 an appointment at the University of Illinois, an affiliation that lasted for the rest of his life—first as associate professor, then as professor, and finally as professor emeritus. His retirement in 1931 was from classroom responsibilities only, for he continued his research and writing in his office at the university. The university undertook, as “a fitting memorial of his contributions to mathematical scholarship and to the renown of the University,” the collection and reprinting of Miller’s studies in the theory of finite groups as well as other studies. It is said that of the more than 800 titles that appeared in some twenty periodicals over forty years approximately 400 made direct scientific contributions to that theory. Other papers were written in the hope that teachers of elementary and secondary mathematics might be inspired to study advanced mathematics. Miller himself aided in the preparation of these memorial volumes.

This was not the only legacy that Miller left to the University of Illinois. To the great surprise of the colleagues who knew him well, the university found itself after his death the beneficiary of a bequest valued at just under one million dollars, the accumulation of judicious investments. His wife, the former Cassandra Boggs of Urbana, had predeceased him in 1949 and there were no children.

Miller’s interest in the history of mathematics was second only to that in the theory of finite groups. His articles on the history of his own subject were of particular significance and value. He became a severe critic of historical methodology in mathematics and was zealous in rooting out error in conjecture or assumed fact. His letters in the David Eugene Smith collection at Columbia University offer ample evidence of this missionary fervor. His “History of Elementary Mathematics” remained unpublished, although there was originally the intention to include it in a volume of the Collected Papers.

Imre Lakatos , Life Imre Lakatos did important work in the 1960s and 1970s in the philosophy both of mathematics and science. He was born Imré Lipsitz in Debrecen H… Donald E. Knuth , Knuth, Donald Knuth, Donald American Computer Scientist and Mathematician 1938– Donald Ervin Knuth is considered one of the world's leading computer… Giuseppe Peano , Peano, Giuseppe mathematics, logic. Giuseppe Peano was the second of the five children of Bartolomeo Peano and Rosa Cavallo. His brother Michele was… Alberto P. Calderon , Alberto Calderón's (born 1920) revolutionary influence turned the 1950s trend toward abstract mathematics back to the study of mathematics for practi… Martin Gardner , Gardner, Martin Gardner, Martin American Author 1914– One of the most well-known creators of mathematical puzzles is Martin Gardner. From 1957 to 198… Brahmagupta , Brahmagupta Brahmagupta (c. 598–c. 670) was one of the most significant mathematicians of ancient India. He introduced extremely influential concepts…