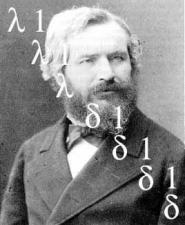 Jordan was born into a well-to-do family. One of his granduncles (also named Camille Jordan) was a fairly well-known politician who took part in many events from the French Revolution in 1789 to the beginning of the Bourbon restoration; a cousin, Alexis Jordan, is known in botany as the discoverer of “smaller species” which still bear his name (“jordanons”). Jordan’s father, an engineer, was a graduate of the école Polytechique; his mother was a sister of the painter Pierre Puvis de Chavannes. A brilliant student, Jordan followed the usual career of French mathematicians from Cauchy to Poincaré: at seventeen he entered the ècole Polytechnique and was an engineer (at least nominally) until 1885. That Profession left him ample time for mathematical research, and most of his 120 papers were written before he retired as an engineer. From 1873 until his retirement in 1912 he taught simultaneously at the Ècole Polytechnique and the Collége de France. He was elected a member of the Academy of Sciences in 1881.

Jordan’s place in the tradition of French mathmatics is exactly halfway between Hermite and Poincaré. Like them he was a “universal” mathematician who published papers in practically all branches of the mathematics of his time. In one of his first papers, devoted to questions of “analysis situs” (as combinatorial topology was then called), he investigated symmetries in polyhedrons from an exclusively combinatorial point of view, which was then an entirely new approach. In analysis his conception of what a rigorous proof should be was far more exacting than that of most of his contemporaries; and his Cours d’ analyse, which was first published in the early 1880’s and had a vary widespread influence, set standards which remained unsurpassed for many years. Jordan took an active part in the movement which started modern anaslysis in the last decades of the nineteenth century: independently of Peano, he introduced a notion of exterior measure for arbitrary sets in a plane or in n-dimensional space. The concept of a function of bounded variation originated with him;and he proved that such a function is the difference of two increasing functions, a result which enabled him to extend the definition of the length of a curve and to generalize the known “criteria of convergence of” topology was to realize that the decomposition of a plane into two regions by a simple closed curve was susceptible of mathematical proof and to imagine such a proof for the first time.

Although these contributions would have been enough to rank Jordan very high among his mathematical contemporaries, it is chiefly as an algebraist that he reached celebrity when he was barely thirty; and during the next forty years he was universally regarded as the undisputed mater of group theory.

When Jordan started his mathematical career, Galois’s profound ideas and results (Which had remained unknown to most mathematicians until 1845) were still very poorly understood, despite the efforts of A. Serret and Liouville to popularize them; and before 1860 Kronecker was probably the only first-rate mathematician who realized the power of these ideas and who succeeded in using them in his own algebraic research. Jordan was the first to embark on a systematic development of the theory of finite groups and of its applications in the directions opened by Galois. Chief among his first results were the concept of composition series and the first part of the famous Jordan-Hölder theorem, proving the invariance of the system of indexes of consecutive groups in any composition series (up to their ordering). He also was the first to investigate the structure of the general linear group and of the “classical” groups over a prime finite field, and he very ingeniously applied his results to a great range of problems; in particular, he was able to determine the structure of the Galois group of equations having as roots the parameters of some well-known geometric configurations (the twenty-seven lines on a cubic surface, the twentyhyphen;eight double tangents to a quartic, the sixteen double points of a Kummer surface, and so on).

Another problem for which Jordan’s knowledge of these classical groups was the key to the solution, and to which he devoted a considerable amount of effort from the beginning of his career, was the general study of solvable finite groups. From all we know today (in particular about p groups. a field which was started, in the generation following Jordan, with the Sylow theorems) it seems hopeless to expect a complete classification of all solvable groups which would characterize each of them, for instance by a system of numerical invariants. Perhaps Jordan realized this; at any rate he contented himself with setting up the machinery that would automatically yield all solvable groups of a given order n. This in itself was no mean undertaking; and the solution imagined by Jordan was a gigantic recursive scheme, giving the solvable groups of order n when one supposes that the solvable groups of which the orders are the exponents of the prime factors of n are all known. This may have no more than a theoretical value; but in the process of developing his method, Jordan was led to many important new concepts, such as the minimal normal subgroups of a group and the orthogonal groups over a field of characteristic 2 (which he called“hypoabelian”groups).

In 1870 Jordan gathered all his results on permutation groups for the previous ten years in a huge volume, Traité des substitutions, which for thirty years was to remain the bible of all specialists in group theory. His fame had spread beyond France, and foreign students were eager to attend his lectures; in particular Felix Klein and Sophus Lie came to Paris in 1870 to study with Jordan, who at that time was developing his researches in an entirely new direction: the determination of all groups of movements in three-dimensional space. This may well have been the source from which Lie conceived his theory of “continuous groups” and Klein the idea of “discontinuous groups” (both types had been encountered by Jordan in his classification).

The most profound results obtained by Jordan in algebra are his “finiteness theorems,” which he proved during the twelve years following the publication of the Traité The first concerns subgroups G of the symmetric groups ? Gn (group of all permutations of n objects); for such a group G, Jordan calls “class of G” the smallest number c>1 such that there exists a permutation of G which moves only c objects. His finiteness theorem on these groups is that there is an absolute constant A such that if G is primitive and does not contain the alternating group ?n then n≤ Ac2 log c (in other words, there are only finitely many primitive groups of given class c other than the symmetric and alternating groups).

The second, and best-known, finiteness theorem arose from a question which had its origin in the theory of linear differential equations; Fuchs had determined all linear equations of order 2 of which the solutions are all algebraic functions of the variable. Jordan reduced the similar problem for equations of order n to a problem in group theory: to determine all finite subgroups of the general linear group GL(n, C) over the complex field. It is clear that for n≥1 there are infinitely many such groups, but Jordan discovered that for general n the infinite families of finite subgroups of GL (n, C) are of a very special type. More precisely, there exists a function φ (n) such that any finite group G of matrices of order n contains a normal subgroup H which is conjugate in GL (n C) to a subgroup of diagonal matrices, and such that the index (G: H) is at most φ (n (equivalently the quotient group G H can only be one of a finite system of groups, to isomorphism).

Jordan’s last finiteness theorem is a powerful generalization of the results obtained earlier by Hermite in the theory quadratic forms with integral coefficients. Jordan considered, more generally, the vector space of all homogeneous polynomials of degree m in n variables, with complex coefficients; the unimodular group SL (n, C ) operates in this space, and Jordan considered am orbit for this action (that is, the set of all forms equivalent to a given one F by unimodular substitution). Within that orbit he considered the forms having (complex) integral coefficienta (that is, coefficienta which are Gaussian integers), and he placed in the same equivalence class all such forms which are equivalent under unimodular substitutions having (complex) integral coefficients. His fundamental result was then that the number of these classes is finite, provided m>2 and the discriminant of F is not zero.