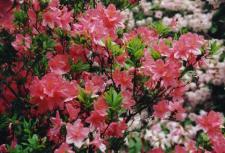 Michaux compiled the first flora for eastern America, mainly from his own specimens. He introduced many American plants into French horticulture and disseminated the camellia, silk tree, and tea olive in the Carolinas.

Michaux was the eldest son of the manager of the 500-acre royal farm at Satory. His father died when the boy was seventeen, and after four years at a boarding school Michaux became manager of the farm. At twenty-three he married Cècile Claye, daughter of a wealthy Beauce farmer. She died following the birth of their son, François André, and Michaux then began to concentrate on botany and horticulture.

He first studied under Le Monnier at Montreuil, near Versailles. Michaux pursued his botanical studies with Bernard de Jussieu at the Trianon (1777) and then at the Jardin des Plantes. He returned from a visit to England with seeds for Le Monnier and the influential Louis, due de Noailles of Perpignan. In 1780 he botanized with Lamarck and André Thouin in the Auvergne and the Pyrenees, and he then spent three years traveling through Persia.

Although he wished to explore Tibet, the French government commissioned him to visit North America, particularly to investigate potential sources of ship timbers. With his son and a journeyman gardener, Pierre Paul Saunier, he embarked for New York on 1 September 1785. After two years of collecting and cultivating at Hackensack, New Jersey, Michaux sent 5,000 trees and twelve parcels of seed to France. In September 1787 he set out for Charleston, South Carolina, where he established a second garden. The reputed quinine substitute Pinckneya (Rubiaceae) especially interested him. William Bartram’s discoveries early attracted Michaux’s attention, and he botanized along the St. Johns River and its savannahs in Spanish Florida. Mark Catesby’s Natural History prompted him to visit the Bahamas.

The last trip for which Michaux received support from the pre-Revolutionary French government was a difficult journey into the mountains of North Carolina. In 1792 Michaux made his longest trip—eight months—to Hudson Bay via the Saguenay River and Lake Mistassini. Then followed a threemonth trip to Kentucky. Sponsored by the French revolutionary minister to the United States, Edmond Charles Genet, it was a political as well as botanical journey. In 1794 he returned to the coniferous forests of the southern Appalachians and then journeyed to the Illinois prairies. Thus ended ten years of exploration in America.

His personal funds exhausted, Michaux sailed for France from Charleston on 13 August 1796. He was shipwrecked off the Netherlands coast, and his specimens were only tediously salvaged. Arriving in France, he found the Republic unwilling to indemnify his private expenses or to support future explorations in America. He then set about writing on the American oaks, but before the engravings were completed, he accepted a position with Nicolas Baudin’s government expedition to Australia. He stipulated that he be permitted to disembark at Mauritius for exploration and to establish a garden there. He then sailed for Madagascar to found a garden at Tamatave. Before he was able to explore the interior, he contracted a fever and died. Three different death dates have been published although Deleuze offers none; most, though weak, evidence supports that of 13 November 1802.

Michaux’s success no doubt encouraged the French naturalists Louis Bosc and Palisot de Beauvois to visit America. His Histoire des chèenes de l’Amérique, illustrated with twenty plates, mostly by Redouté, inspired an interest in forestry that was furthered by his son.

I. Original Works. Michaux’s writings are Histoire des chènes de l’Amérique (Paris, 1801); “Mémoire sur les dattiers, avec des observations sur quelques moyens utiles aux progrès de l’agriculture dans les colonies occidentales,” in Journal de physique, de chemie, d’histoire naturelle et des arts, 52 (1801), 325–335; and Flora boreali-americana (Paris, 1803; repr. with extensive introduction by J. Ewan, New york, 1973); none of them was seen in print by Michaux, G. A. Pritzel and others attributed the Flora to L. C. M. Richard, who assisted Michaux’s son François in bringing out the work, but there is no peremptory reason for doubting its authorship. The type specimens of the Flora are preserved in a separate herbarium at the Muséum d’Histoire Naturelle, Paris.