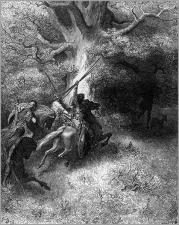 oxford
views updated
Absalom. Son of David. After the rape of his sister Tamar by their half-brother Amnon, Absalom murdered Amnon and fled the court. Having raised rebellion against his father David, he was killed in the subsequent battle, evoking David's lament (2 Samuel 13–18).