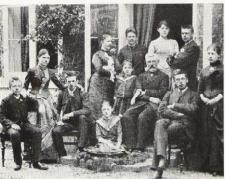 Finsan, a descendant of the Viking Icelanders and son of a governor of the Faeroe Islands, was educated at Reykjavik and obtained a medical degree at the University of Copenhagen in 1891. He was subsequently appointed a demonstrator in anatomy at the surgical academy of the same university; but his interest in the therapeutic uses of light became his exclusive professional preoccupation by 1892 and led him shortly thereafter to abandon a career in academic medicine. This decision appears to have been prompted by his affinity for a sunlit environment, which he valued especially because of his attachment to outdoor life.

Yet Finsen’s earliest studies were not centered on the salubrious effects of sunlight. His first investigations were devoted to an antithetical question: the nature of light-induced inflammations. Such inflammations were exhibited in patients with smallpox after prolonged exposures to solar radiations, which gave rise to severe blistering of the irritated skin. As a consequence, the patients became more susceptible to infection, secondary fever, and excessive scar formation. Finsen found that the injurious influences of light were produced by the so-called chemical rays placed in the blue, violet, and especially the ultraviolet (actinic) Parts of the spectrum. The other extremity of the spectrum presented the opposite phenomenon: the red and ultrared rays, which gave a minimum chemical effect, were found to promote rapid healing of the smallpox lesions and to obviate the unfortunate complications of the disease under the conditions of ordinary light. These initial results in photobiology, including the “red room” (red light) treatment of variola, were issued by Finsen in 1893 and 1894.

Finsen’s investigations were sufficiently advanced by 1894 to permit the conclusion that light harbored a direct therapeutic quality. Evidence for this argument was gathered from the contemporary researches of Émile Duclaux and others on the lethal effects of light upon bacteria. In 1895 Finsen applied this finding to the treatment of lupus vulgaris, an intractable and highly disfiguring form of tuberculosis of the skin. He employed for this purpose a powerful source of light from a carbon arc, filtered through a quartz prism, whereby the diseased tissues were exposed to high concentrations of the “incitant,” or ultraviolet, rays. A series of publications reporting successful cures of lupus vulgaris by means of the concentrated-light treatment brought Finsen an international reputation and inaugurated the modern era of phototherapy.

This discovery was especially acclaimed in Copenhagen, where an institute for the study of phototherapy was founded in 1896 through philanthropic efforts and was placed under Finsen’ direction. He and his associates in subsequent years reported from this Lysinstitut numerous clinical experiences with the “light-bath” method.

Finsen’s health had begun to fail in his twenty-third year. By the age of thirty he was almost totally incapacitated from a constrictive pericarditis, which he attributed to a hydatid infection contracted during his student days in Iceland. This led him to perform a self-study on the problem of water ant salt metabolism, the results of which laid the scientific foundations for the low-fluid and low-salt-intake therapy. Despite his rapid decline, Finsen labored with formidable vigor. He lived to witness a final tribute in the form of the Nobel prize for Medicine or Physiology, awarded to him in 1903.

Rainbow , Water droplets and light form the basis of all rainbows, which are circular arcs of color with a common center. Because only water and light are requ… Charles Jules Henri Nicolle , medicine, bacteriology. Nicolle grew up in Rouen, where his father, Eugène Nicolle, was a physician at the municipal hospital and professor of natura… Skylight , skylight •halite • candlelight • fanlight •lamplight • gaslight • flashlight •starlight • headlight • penlight •daylight • tail light •Peelite, pelit… Lighting , Light is essential for human life. Modern societies have created homes, schools, and workplaces that rely on electric light sources. Some of the elec… Optics , Optics Optics is the branch of physics that is concerned with visible light and its properties. Physicists who focus on optics study the properties o… Jean Bernard Leon Foucault , Foucault, Jean Bernard Léon Foucault, Jean Bernard Léon experimental physics. The son of a bookseller-publisher, Foucault received his education at h…