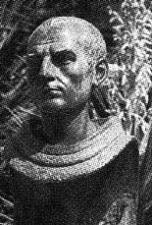 The Spanish author Gonzalo de Berceo (ca. 1195-c1252) wrote narrative religious poems and is considered the foremost poet of the Castilian language in the 13th century.

Gonzalo de Berceo was born in Berceo near Navarre in the wine-rich region of La Rioja, which figures prominently in his works. He was raised and educated in the monastery of San Millán de la Cogolla, an important shrine in that region. It is also possible that he studied in the short-lived institute of Palencia. He joined the priesthood at an unknown date, but by 1221 he was already a deacon in San Millán. Of the six documents known of him, four are dated in San Millán, the last one Dec. 20, 1246. He died after 1252, the date of the death of King Ferdinand III of Castile, which is mentioned in Milagros XXV.

Gonzalo's extant works are all in cuarderna vía (the learned poetic form, imported from France, consisting of 14-syllable verses arranged in quatrains with a single rhyme) and can be divided into three groups: lives of the saints (Vida de San Millán de la Cogolla, Vida de Santo Domingo de Silos, Martirio de San Lorenzo, and Vida de Santa Oria), Marian works (Loores de Nuestra Señora, Milagros de Nuestra Señora, and El duelo que fizo la Virgen), and doctrinal works (El sacrificio de la Misa, Los signos del Dia del Juicio, and Los tres Himnos). The chronology of these works has not been fully established. A few other works have been lost, and the long narrative poem Libro de Alexandre (ca. 1240) has been attributed to him in one of its two extant manuscripts, though the attribution is open to question.

The subject of Gonzalo's poetry is religious and international (lives of the saints and miracles of the Virgin, many of them with known French sources), and traditionally his poems have been considered the lyrical outpourings of a simple soul. But the fact remains that these poems always find a way of centering upon his monastery of San Millán de la Cogolla. Obviously, naiveté was no more a trademark of Gonzalo than it was of the Middle Ages in general. The factor of religious propaganda, therefore, should not be neglected when considering the wellsprings of his poetry, which in fact uses many of the technical traits of the juglares (minstrels), who would be the logical broadcasters of his poems. But his works are remembered, and read, as much more than the religious propaganda so common in his day. His poetic language shows a surprising maturity; his poetic technique is near perfect; and his creative mind gives concrete and plastic reality to his subject.

The most recent and complete English work on Berceo is Brian Dutton's introduction to his edition of Berceo's Vida de San Millán. □