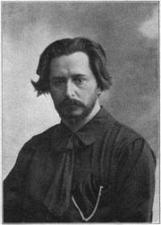 (1871–1919), Russian prose writer, playwright, and publicist whose works, internationally acclaimed in his lifetime, are infused with humanistic protest against social oppression and humiliation.

Born on August 21, 1871, in the town of Oryol (Orel), Leonid Nikolayevich Andreyev studied law at St. Petersburg University and briefly practiced as a lawyer. A volume of stories, published in 1901 by Maxim Gorky's "Znanie" enterprise, made him famous. After the death of his first wife in 1906 and the violent oppression of the anti-autocratic mutinies that occurred between 1905 and 1907, Andreyev entered a period of deep resignation, abandoning radical leftist ideas but failing to develop viable alternatives. His political confusion resonated with the liberal intelligentsia, for whose he became the most fashionable of authors in the 1910s.

In Andreyev's narratives, crass images of irrationality and hysteria are often blended with crude melodrama, yet they also reveal persistent social sensitivities. Thus, the short story "Krasnyi smekh " ("Red Laughter," 1904) depicts the horror of war, whereas "Rasskaz o semi poveshennykh " ("The Seven Who Were Hanged," 1908) attacks capital punishment while idealizing political terrorism. Andreyev's plays, closely associated with Symbolism, caused scandals and enjoyed huge popularity. His unfinished novel Dnevnik Satany (Satan's Diary, 1918) was inspired by the death of U.S. millionaire Alfred Vanderbilt on the Lusitania in 1915, and seeks to convey the doom of bourgeois society.

In addition to his writing, Andreyev was also an accomplished color photographer and painter. He displayed pro-Russian patriotism in World War I, but welcomed the February Revolution of 1917. Later that year, he radically opposed the Bolshevik coup and emigrated to Finland. In his last essay, "S.O.S." (1919), he called upon the president of the United States to intervene in Russia militarily. Andreyev died on September 12th of that same year.