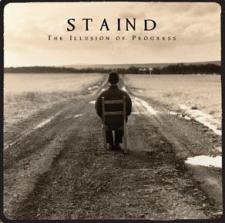 During much of the 1980s and 1990s, metal and hard rock bands fell out of fashion, making way for such styles as grunge and hip-hop on the pop charts. But in the late 1990s and into the new millennium, the heavy hitters—from rap-metal platinum-selling bands to brutal rockers previously reserved to the underground—made a comeback, proving that metal was still alive and well. Crashing the mainstream party bands, groups like Staind, Sevendust, Static X, System Of A Down, Incubus, Coal Chamber, P.O.D., and music press favorites Slipknot cashed in with gold and platinum albums. “There has always been this misconception that metal, as a genre, is very narrow and doesn’t leave a lot of room for experimentation, “remarked senior writer for MTV News online Robert Mancini, as quoted by Bryan Reesman in Billboard.” Obviously, what we’re seeing flies in the face of that theory. Because you have bands like Static-X or Pitchshifter bringing in techno and electronic elements, and you have bands like the Deftones or Coal Chamber that are playing with different influences in terms of lyrical input and vocal melodies, they’re finally injecting this [genre] with some new blood and some new energy.”

Although most old school metal fans bemoan the younger bands’ formula—an increased use of dissonance and a decreased use of melody—teens around the world latched on to the harsher sound immediately. By the late 1990s, new metal music was an integral part of all active rock and most modern rock radio stations. “One of the bands that I think started to open the door for other heavy bands is Rage Against The Machine, because, as heavy as they are, they’re all over modern-rock radio, “said Kimberly Zide of Concrete Management, providing one explanation why new metal not only attracted pop fans, but alternative music listeners as well. “With Tom Morello and all his guitar craziness, you’ve got people who wouldn’t normally be interested [listening].”

Thus, the climate was perfect for a band like Staind, one specializing in fuzzy, loud guitars and hammering drum beats. Based in Springfield, Massachusetts, and comprised of Aaron Lewis on vocals, Mike Mushok on guitars, Johnny April on bass guitar, and Jon Wysocki on drums, the band’s roots date back to 1993 when Lewis and Mushok met at a Christmas party. The duo, along with Wysocki, a friend of Mushok, and another bassist (who would leave the band) began rehearsing and performing the following year, and in November of 1995, after recruiting April, the current lineup was complete. However, establishing themselves took both time and effort. Band members did everything from flipping burgers at McDonald’s to mowing lawns to finance their first record and independent tour. “I’ve done many dishes in my day, “Lewis recalled to Rolling Stones Liza Ghorbani. “There was a time when Johnny was working three jobs and playing with us also.” In those days, the band went by the name Stain, but then learned that the moniker had already been

claimed by another group. “So we got real creative and added a d, “explained Lewis.

In November of 1996, Staind released their self-recorded, self-promoted debut album. Tormented, expected to be reissued in 2001 but made available via Staind’s official website, sold 2, 000 copies within a year, thanks to the band members’ efforts with distributing to local record stores and at concerts. From the end of the year and throughout most of 1997, Staind traveled all over England, performing with bands like Honeyball, Shed, Kilgore, GWAR, Far, and God Lives Underwater, steadily gaining a strong following.

Their big break, however, arrived on October 23, 1997. That night Staind was set to open for Limp Bizkit at the Webster Theater in Hartford, Connecticut, when just 20 minutes before they were supposed to take the stage, Limp Bizkit lead singer Fred Durst approached Lewis, obviously angered, with a copy of Staind’s Tormented CD in hand. “Fred thought we were devil worshippers, “Lewis recalled to Ghorbani. “He was freaked out by our first CD cover, which was a bleeding Bible with a knife in it.” Although Durst assumed incorrectly, he proceeded to try and kick Staind off the bill, leading to an exchange of words with Mushok. The confrontation finally ended when Durst threw the copy of Tormented across the table, making it clear that he wanted nothing to do with Staind.

So much for their break, the band thought. Fortunately, Durst changed his mind and allowed the group to perform. He even stayed for the show, and ended up standing right next to the stage throughout Staind’s entire set. “When we came off, it was a whole different Fred than we’d met before, “said Lewis. “He said we were the best band he’d seen lately.” In addition, Durst told the group about a new production company he was starting, and expressed an interest in working with Staind. After an exchange of phone numbers, Limp Bizkit and Staind went their separate ways.

Meanwhile, Staind were busy in the studio recording a demo tape with four new songs. Mushok attempted to contact Durst, but because of Limp Bizkit’s heavy touring schedule, he was unsuccessful. Then, Staind learned about Limp Bizkit opening for the Deftones near Boston on the eve before Thanksgiving Day in 1997, Therefore, thinking this a perfect opportunity to give Durst a copy of the demo, Staind drove to Boston to attend the show. Upon their arrival, the members of Staind found Limp Bizkit’s bus and knocked on the door. Though Durst was busy elsewhere, the foursome met up with Limp Bizkit’s DJ Lethal, who in turn, gave his group’s leader the tape later that night.

Following the show, Staind returned home discouraged that they could not find Durst in person. However, at around 2 a.m., Mushok was awakened by a phone call. To his surprise, Durst was on the other end. He told the guitarist that he loved the tape and invited Staind to join him at his home in Jacksonville, Florida, to work on their new material. After Christmas, Staind packed up their van and struck out for Florida, and began work with Durst the day after their arrival. According to Staind, Durst made a significant impact on their sound. “Aaron, our singer, has an amazing voice and Fred helped to bring that out, “Mushok wrote for the Official Staind Homepage. “We had a lot of screaming parts in our songs. Fred said, ’Man, you can sing, why don’t you do that more?’”

While working with Staind, Durst contacted Flip Records president Jordan Schur, and within a week after leaving Jacksonville, Staind was aboard a plane to Los Angeles. Here, the band met with Schur, recorded a three-song sampler, and played some gigs with Limp Bizkit, Sevendust, and Clutch. In February of 1998, the group signed a deal with Flip, signed a joint venture with Elektra Records soon thereafter, and found a management company, The Firm, which also represented Limp Bizkit, Ice Cube, and Orgy. With the help of The Firm, in June of 1998, Staind were able to persuade Terry Date (known for his work with the Deftones, Pantera, Soundgarden, and White Zombie) to produce the group’s next album.

Staind spent the summer and fall months of that year recording and mixing in Seattle. Released in April of 1999, Dysfunction proved an instant success. Containing the hit song “Mudshovel” (an earlier version also appeared on their self-made debut), it eventually achieved platinum status. A tour with Kid Rock followed the release of Dysfunction. That summer, Staind participated in the Family Values Tour alongside such acts as Limp Bizkit, Filter, Run-DMC, Mobb Deep, and Crystal Method. In 2000, still riding high on their major-label debut, Staind contributed tracks to two compilation albums: the Scream 3 film soundtrack and a rock tribute to rap music entitled Take A Bight Outta Rhyme: A Rock Tribute To Rap.


Staind was one of the most successful commercial hard rock acts of the late 1990s, winning over mainstream audiences with its dark, moody power ballads.

Comprised of Johnny April on bass, singer Aaron Lewis on guitar, Mike Mushok on guitar, and Jon Wysocki on drums, Staind played its first gig in February 1995. The band built a small but faithful following by aggressively touring throughout the Northeast. Staind's big break came when friends from the band Sugarmilk invited Staind to play with them and rising stars Limp Bizkit at the Webster Theater in Hartford, Connecticut, in October 1997. Staind's high-energy live show impressed Fred Durst of Limp Bizkit, who invited the band to record demo tracks for his production company. Later, with Durst's help, Staind signed a recording contract with Flip Records.

After Staind enjoyed a high-profile coming-out party on the Vans Warped Tour, Flip released the band's debut album, Dysfunction, in 1999. With a sound influenced heavily by early 1990s grunge kings Alice in Chains, songs such as "Mudshovel," "Home," and "Just Go" made significant inroads with MTV audiences. Staind's relentless touring in support of the album paid off, as Dysfunction sold more than 1 million copies.

Staind's ultimate commercial breakthrough came in a rather unconventional manner. In 1999 Staind toured with Limp Bizkit and other bands as part of the "Family Values Tour"; at one concert in Biloxi, Mississippi, Lewis, at Durst's urging, performed an unfinished song called "Outside." Alone on acoustic guitar with only Durst singing in harmony, Lewis debuted the brooding song, droningly delivering his damning lyrics: "I'm on the outside / I'm looking in / I can see through you / See your true colors / Inside you're ugly, ugly like me / I can see through you / See to the real you." MTV subsequently began airing a clip of the performance, and Staind entered into heavy rotation on the music television station, the ballad format appealing to audiences far beyond Staind's traditional aggressive, hard-rock circles.

For a band with its roots in hard rock and heavy metal, Staind ironically became commercial heavyweights on the merits of their affecting ballads.