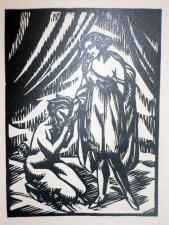 The French author Remy de Gourmont (1858-1915) was the most brilliant French critic and essayist of the period from 1900 to the outbreak of World War I.

Remy de Gourmont was born on April 4, 1858, at the Château de La Motte in Normandy, the son of an old Norman family of minor nobility. He went to school at Coutances and studied law at the University of Caen before moving to Paris to take a post at the National Library at the age of 25. Once in Paris he came under the influence of the Decadent writers the Comte de Villiers de l'Isle-Adam and J. K. Huysmans, and his early work is marked by a similar decadentism, extreme preciosity of style, and interest in the occult. In his mid-20s Gourmont fell victim to lupus, a skin disease which disfigured his face so badly that for some years he scarcely dared go out; his natural bent toward solitude was powerfully reinforced by this cruel experience and by his dismissal from his post as a librarian in 1891 for having published an attack on what he considered the excessively patriotic and nationalistic sentiment of the time.

In the meantime Gourmont's literary career had already begun, with a novel, Merlette, in 1886 and his collaboration as one of the founding members of the literary review Mercure de France in 1889. This review rapidly became a keen supporter of the symbolist movement in literature, largely through Gourmont's influence, and he remained one of its most important contributors for the rest of his life. In the next few years he published, in elegant, limited editions, several volumes of stories, poetry, and a play, all in the symbolist manner and dealing with the fantastic or supernatural; the best-known of these is the novel Sixtine (1890).

Gourmont as a writer of fiction is largely known for his cerebral qualities, combining mysticism, sensuality, and a highly artificial style. But he is better remembered today as critic and essayist: his Livre des masques (1896; The Book of Masks), criticism of the symbolist poets, various works on language and style, and above all the collected essays in Promenades littéraires (7 vols., 1904-1927) and in Promenades philosophiques (3 vols., 1905-1909). During his lifetime he published over 60 books of various kinds.

As a critic, Gourmont was distinguished by an inquiring mind and extremely wide tastes, claiming that "a work of art exists only through the emotion it gives us." The result is impressionistic criticism with keen insight. His interest in language and style also produced ideas of lasting influence, in particular on the poets Ezra Pound and T. S. Eliot. Gourmont was saddened and impoverished by the outbreak of war in 1914, and his remaining time was unhappy; he died of a stroke on Sept. 27, 1915.