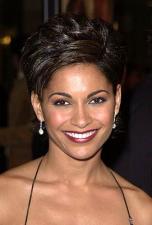 Salli Richardson is an actress who has appeared in more than fifty television, film, and theater roles since beginning her acting career in the late 1970s. She has often played a romantic lead, including opposite Will Smith in the film I Am Legend (2007). As a woman of mixed African, Caucasian, and Native American descent, Richardson's ethnic ambiguity has allowed her to play characters of a variety of ethnic origins from Native American to Hispanic. She has performed in a number of recurring roles in television series, including Gargoyles, CSI: Miami, and the hit science fiction series Eureka.

Richardson was born Salli Elise Richardson on November 23, 1967, in Chicago, Illinois. Her mother, Marcia Harris, was of black and Native American (Cherokee) descent, and operated a recording studio in Chicago, while Richardson's father, Duel Richardson was white, and worked as director of neighborhood relations and educational programs in the Office of Community Affairs at the University of Chicago.

Though she was of mixed racial heritage, Richardson grew up thinking of herself as African-American. "I was raised around both my parents, and I knew that my father is White and my mother is Black, but I never thought that I was anything but Black," she said in Ebony in 1997. "It never crossed my mind that I could be anything else. No one ever said anything; no one ever made any comments in my family. It was just never a question. I think being Black is a wonderful thing to claim."

Richardson was an athletic child and played tennis for University of Chicago Laboratory High School. She developed an early interest in singing and performance that remained with her for the rest of her life. "I think I've always wanted to perform," she said in a 1993 interview with Aldore Collier in Ebony. "I don't think there's anything else I've ever wanted to do." While spending time in her mother's recording studio as a child, Richardson entertained herself by singing along with old soul and jazz recordings.

It was Richardson's mother who first encouraged her to try acting, urging her to audition for a part in a production of the Gwendolyn Brooks poem The Tiger Who Wore White Gloves at the Kuumba Workshop in Chicago. The Kuumba Workshop, which was estab- lished in 1968 by actress Val Gray Ward, had become an important local center for African-American theater. Richardson won the role, at fourteen years old, and continued working with the Kuumba Workshop Company in subsequent years.

Though Richardson played a number of starring roles in theater productions mounted by Chicago-area theaters, she had a difficult time finding roles in television and film because Chicago lacked the developed film communities of New York and Los Angeles. Richardson won a few minor roles in films shot in Chicago and also appeared in a number of commercials. She eventually decided to move to Los Angeles in an effort to better market herself as a film actress. At first she suffered from being a relatively new face in a crowded market. "I was losing a lot of jobs because the other people had more notoriety than I did," she told Collier. Her ethnic ambiguity also proved to be a problem initially. "People think that I am Persian, Indian, East Indian, Spanish, everything," she said to Collier. "And that was a problem when I was first working because it was like, ‘She doesn't really look this or that.’"

Richardson finally won a major screen role in the 1991 film Up Against the Wall, but the film's poor critical showing did not significantly increase her name recognition. She played minor roles in a few major films including Prelude to a Kiss alongside Alec Baldwin and Meg Ryan, and Mo' Money alongside Damon Wayans. Her major breakthrough came with a starring role in the 1993 film How U Like Me Now? alongside writer and star Darryl Roberts. The film was a minor critical success, and Richardson was soon being considered for other principal film roles.

In 1993 Richardson performed in a leading role in the western drama Posse as a Native American woman who was the romantic interest of star Mario Van Peebles. The film was a critical failure, but Richardson won praise for her performance and sex appeal. Richardson also recorded a song, If I knew Him at All, for the soundtrack.

In 1993 Richardson played in an episode of the television series Star Trek: Deep Space Nine. Her association with the cast of Star Trek continued the following year when she provided the voice of Elisa Maza for the hit animated television series Gargoyles, which also featured the voices of Star Trek regulars Jonathan Frakes, Marina Sirtis, Brent Spiner, and Michael Dorn in cameo roles. Richardson continued acting in Gargoyles until the series was cancelled in 1996, and also appeared in made-for-television and video films based on the Gargoyles characters in 1995 and 1998.

Throughout the remainder of the 1990s, Richardson remained busy appearing in both television and film roles. She played the romantic lead in the 1993 Wayans Brothers film A Low Down Dirty Shame, and also appeared in the 1996 film Great White Hype alongside Peter Berg and Samuel L. Jackson. Richardson undertook a serious role in the 1995 film When We Were Colored, about the trials of growing up in the racially segregated South.

Richardson's appearances in Star Trek and Gargoyles increased her a reputation as an actress with talent for science fiction. In 1998 she played a role in the series Mercy Point about a futuristic hospital staffed by a mix of human and alien doctors. Richardson appeared in four episodes of what was ultimately a failed series that left the air after a single season. That same year she returned to the theater and appeared in The Old Settler alongside actress CCH Pounder, and was nominated for an Ovation Award from the Theater League of Southern California for her performance.

Richardson landed costarring roles in a number of major films, including the hit Antwone Fisher (2002) starring Denzel Washington, and the 2003 film Biker Boyz starring Laurence Fishburne. Her most notable role was as the deceased wife of Will Smith's character appearing in flashback sequences in the science fiction drama I Am Legend (2007).

Richardson's work in television was more successful. She played a recurring character in the hit series CSI: Miami in 2003 and also appeared in episodes of House M.D. and New York Undercover. Having already distinguished herself in the sci-fi genre, in 2006 Richardson was hired for a major role in the series Eureka, which became one of the most successful original series produced on the cable television network Sci Fi Channel. In the series Richardson played Allison Blake, an agent of the Department of Defense who becomes involved with the residents of Eureka, a secret haven for America's geniuses.

Although most of Richardson's television and film appearances have been of a supporting nature, she has been successful enough to find continuous acting work since her debut in the early 1990s. In 2002 she married long-time romantic partner and fellow actor Dondré Whitfield, and the couple had a daughter, whom they named Parker Richardson-Whitfield, in 2005. She has long wanted to play a female lead in an action-oriented role, saying to Collier in 1993 that her ideal role would be one similar to the French film La Femme Nikita, a strong female role with a lot of physical activity. In an interview with Wilson Morales on BlackFilm.com in August 2007, however, she discussed her career choices: "I find that I love TV so much more and have an opportunity to do better work on TV for some reason, which sounds strange because you have more time in film. … With [Eureka], I feel like I can let all my barriers down and do better work because I have a trust there. TV right now almost pays more than film and keeps my life stable and right now everything is about my daughter; to make sure her life is stable. Everything I do right now, every job, every party that I'm not really into is only because of her."

Anacondas: The Hunt for the Blood Orchid, 2004.

Career: Actress. Performed with the Chicago Children's Choir; appeared in industrial films and commercials; appeared as Allison Blake, in Eureka: Hide and Seek, an internet series; cohost, with Dondre Whitfield, of an infomercial for TimeLife's "Midnight Soul" music collection, 2007.

Denise, Up Against the Wall, African American Images, 1991.

Voice of Elisa Maza, Gargoyles: The Force of Goliath, 1998.

Karen, Book of Love (also known as Book of Love: The Definitive Reason Why Men Are Dogs), Artisan Entertainment, 2002.

(As Salli Richardson–Whitfield) Half & Half, Biker Boyz, DreamWorks, 2003.