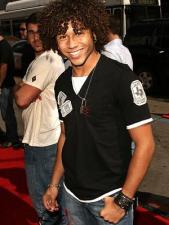 By the age of eighteen, when most young adults are just starting to focus on career possibilities, Corbin Bleu already had a substantial body of work behind him as both an actor and a recording artist. Best known for his role in the phenomenally successful Disney Channel movies High School Musical (2006) and High School Musical 2 (2007), he has been performing since age two in television and film. In addition, Bleu released his first music album and spent the summer of 2007 on a concert tour that showcased his singing and dancing abilities. A teen heartthrob with a memorable mop of curly hair, Bleu expresses a levelheaded response to fame, and stresses that for him "it's not all about the fame and fortune; it's really putting out good work."

Began Career as a Child Model

Born Corbin Bleu Reivers in Brooklyn, New York, on February 21, 1989, Bleu is the son of David (an actor) and Martha Reivers. He got a jump on the competition by beginning his professional life as a toddler. At the age of two, he began appearing in television commercials for such products such as Life cereal, Hasbro, and Nabisco. By age four, he was working as a model, with his image appearing in advertisements for such high-profile clients as Macy's, Gap, Target, and Toys R Us. During this period, Bleu also made his stage debut in the off-Broadway production Tiny Tim Is Dead, playing an abandoned, homeless mute.

Bleu moved with his family from New York to Los Angeles in 1996. He worked steadily in episodic television and feature film roles, including a recurring role on the short-lived ABC police drama High Incident and an appearance on E.R. His feature films from this period include the Tim Allen comedy Galaxy Quest, the sci-fi thriller Soldier, and the comedy Mystery Men, which starred Ben Stiller. Additionally, Bleu was developing his dance skills and in 2001 began intensive training at the Debbie Allen Dance Academy in the Los Angeles area. There he undertook a full gamut of dance instruction, including ballet, jazz, tap, modern, hip-hop, African, break dance, salsa, flamenco, and ballroom. Allen, the famous choreographer who starred in the TV series Fame, told Dance Spirit magazine, "I think [Bleu] really has a career. Success is one thing, but a career is a much longer, broader journey."

Bleu attended the Los Angeles County High School for the Arts, a magnet school like the New York High School for the Performing Arts, which was portrayed in the movie and television series Fame, and which Bleu's mother had attended. During his freshman year, he won his first sizable film role in the teen action caper Catch That Kid. During high school, he performed in such student productions as Footloose and Grease, winning the honor of Theatre Student of the Year.

In 2004 Bleu landed a starring role in the television series Flight 29 Down, which aired for three seasons on the Discovery Kids network. The program, a juvenile version of the ABC series Lost, concerned a group of teenagers stranded on a tropical island after their plane crashes. Bleu played Nathan McHugh, a Boy Scout whose leadership skills do not quite measure up to his self-confidence.

Although popular with its young audience, the success of Flight 29 Down pales in comparison to Bleu's next television project: the Disney Channel original movie High School Musical. The youngest of the six lead actors who were catapulted to fame by the film, Bleu portrayed the basketball player Chad Danforth, who tries to persuade his teammate Troy Bolton (Zac Efron) to give up his interest in theater and focus on winning the basketball championship. High School Musical premiered on January 20, 2006; with an audience of 7.7 million television viewers, it was the Disney Channel's most successful TV movie up to that point.

The broadcast of the original High School Musical production was just the first phase of a marketing blitz across the full panoply of media platforms commanded by the Disney enterprise. The film's soundtrack album went to number one on Billboard's charts. Disney aired sing-along, dance-along, and pop-up editions of the program. The cast members performed musical numbers from the movie during a national concert tour in late 2006, with new solo songs for Bleu and other members of the ensemble. The sequel High School Musical 2 became the most-watched basic cable event in history with an audience of 17.2 million viewers on its debut in August of 2007.

The phenomenon of High School Musical has changed Bleu's life, delivering him to the heights of media celebrity while still in his teens. He told TV Guide, "Well, I used to be able to go to a mall, and now I can't!" On the other hand, he has prepared well for this success: "I know for me, as a person, I've pretty much stayed the same. I still have a great background. My dad comes with me everywhere I go and I wouldn't be able to do it without him, and [I'm] just glad to have him there to keep me grounded."

Recorded the Album Another Side

Bleu played the lead role in another Disney Channel original movie, Jump In!, which aired on January 12, 2007. The film, concerning a young boxer with an enthusiasm for double-dutch jump rope, was another ratings smash, further proving Bleu's appeal to the youth market. Again, Disney scored a crossover hit with the bouncy Jump In! soundtrack album, on which Bleu sings the track, "Push It to the Limit."

A pianist and vocalist, Bleu's first studio effort was a song called "Circles," recorded for an episode of Flight 29 Down. Disney's Hollywood Records label signed him on the strength of that single track. Bleu recorded his first solo album, Another Side, in the fall of 2006. The album fuses rhythm and blues with hip-hop and other pop genres in an upbeat, wholesome commercial blend. Bleu, who admires Prince, Michael Jackson, and Justin Timberlake, cowrote five songs on the album. In 2007 he toured in support of Another Side with the teen sister duo Aly & AJ.

Bleu presents an appealing combination of star quality and adolescent normality. He graduated from high school in 2007 and was admitted to Stanford University, but declined to matriculate because of scheduling commitments. As of 2007 he continued to live at home with his parents and three younger sisters.

For Bleu, the future seems limitless. A third High School Musical production is scheduled for release in late 2008, this time slated for theatrical release. In addition, Bleu is taking a producing credit on his upcoming film Metal Burning. He told TV Guide, "I'm at a point in my career right now that I definitely want to make a little more impact on the projects that I'm working on. And I definitely want to have a little bit more creative control as well." He told an interviewer for Scholastic, "What would be ideal for me would be to continue doing features, go work Broadway, and then go on a worldwide tour for another album. I want to do it all."

Image Award nomination, outstanding performance in a youth/children's program—series or special, National Association for the Advancement of Colored People, 2007, for High School Musical.

Chad Danforth, High School Musical 2: Sing It All or Nothing!, Disney Channel, 2007.

Live with Regis and Kelly, syndicated, 2007.

Performed for the album Another Side; contributor to soundtrack recording of High School Musical.

Keke Palmer , Palmer, Keke 1993— Actor, singer Keke Palmer starred in the 2006 movie Akeelah and the Bee, an appealing underdog tale about a middle-schooler from a… Barbra Streisand , Barbra Streisand Singer, songwriter For the Record… Selected discography Sources The multitalented Barbra Streisand has made her mark as an actress,… Mykelti Williamson , Actor A busy character actor with an impressive list of film and television credits, Mykelti Williamson is best known for his portrayal of Benjamin B… Josh Groban , Groban, Josh February 27, 1981 • Los Angeles, California Singer Josh Groban is not a typical twenty-something pop singer, and record store owners hav… Jennifer Lopez , Lopez, Jennifer Singer, dancer, actress Jennifer Lopez appeared as an overnight sensation when she burst onto the entertainment scene in the mid-1990… Omar Epps , Epps, Omar 1973– Actor “There’s been a buzz on Omar for a while. He has that star aura. It’s an accepted notion in Hollywood that he’s the next in li…