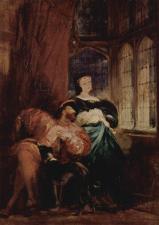 The English painter Richard Parkes Bonington (1802-1828), a fresh and vivid artist in his own right, also served as the connection between French and English painting at a particularly important juncture in the history of art.

Richard Bonington was born on Dec. 25, 1802, at Arnold, near Nottingham, where his father, who was an amateur painter, was governor of Nottingham city jail. In 1817 or 1818 his father set up a lace factory in Calais, France, and trained Richard as a lace designer.

In Calais, Bonington took lessons from Louis Francia, who had been a close friend and associate of the English watercolorist Thomas Girtin; Francia passed on to Bonington the tradition of English watercolor painting at its peak. When his father sought to make him stop taking lessons from Francia, Bonington ran away to Paris. Francia had given him a letter of introduction to Eugène Delacroix, who mentioned in a letter the "tall youth in a short coat who was silently making watercolor studies in the Louvre." Bonington worked on his own and also studied for a time with Baron Gros.

Bonington's work was quickly appreciated in France; indeed, Camille Corot maintained that it was the sight of a watercolor by Bonington in the window of an art dealer which determined his vocation. Every summer Bonington took off on a sketching tour, and lithographs from his drawings appeared in Baron Taylor's Voyages pittoresques dans l'ancienne France. In the famous Salon of 1824, the starting point of the Barbizon school, Bonington and his compatriots John Constable and Copley Fielding received gold medals. By this time Bonington was a close friend of Théodore Géricault and Eugène Isabey, as well as of Delacroix, with whom he shared a studio and who felt there was a great deal to be learned from the young man.

In 1825 Bonington accompanied Delacroix to England, where they made many studies of armor, and in 1826 he traveled with Delacroix's friend Baron Rivet to Venice, where his work took on a new splendor and poignancy. There he made some of his finest paintings, such as View of the Grand Canal. By this time Bonington was probably already suffering from tuberculosis, the "white plague" of the 19th century. He returned to England in 1827 and died in London on Sept. 28, 1828, at the age of 26, leaving a large body of work.

Although Bonington's art had certainly benefited from the example of his brilliant French friends, his influence on French painting was incomparably greater. He introduced into France a new quality of light and color in the treatment of the sea, the sky, and the landscape, as in Normandy Coast; he placed his medieval towns and the undulating French farmlands in the ever-shifting light of day. Under the influence of Delacroix, Bonington painted groups of figures in interiors, particularly Shakespearean subjects. He read Sir Walter Scott, as everyone then did, and the medieval chronicler Froissart, whose language had a powerful charm for him. Bonington drenched his history pictures in local color, and he had a joyful sense of the past, exemplified in Henry IV and the Spanish Ambassador, with no interest in the dark and melancholy side of the romantic vision.

It was Bonington's ambition to blend the skill of the Dutch with the vigor of the Venetians and the light and atmosphere of the English; not altogether successful in the first two categories, he completely succeeded in rendering and passing on the extraordinary English magic. He brought the spontaneity and brilliant coloring of British landscape painting, particularly watercolor, to Delacroix, Géricault, and Isabey and hence to the Barbizon school, which in turn led to the impressionists.

The most authoritative account of Bonington is in Martin Hardie, Water Colour Painting in Britain, vol. 2: The Romantic Period (1967). Andrew Shirley, Bonington (1940), is well reasoned and extremely well written. Hugh Stokes, Girtin and Bonington (1922), contains some striking insights. The basic account is in Allan Cunningham, The Lives of the Most Eminent British Painters, vol. 2 (1879).

Henri Matisse , Le Cateau-Cambrésis, France Died: November 3, 1954 Cimiez, France French painter and sculptor The French painter and sculptor Henri Matisse was one o… Jan Vermeer , The Dutch painter Jan Vermeer (1632-1675) of Delft transformed traditional Dutch themes into images of superlative poise and serenity, rich with embl… Albert Bierstadt , Albert Bierstadt Albert Bierstadt (1830-1902) was the last of the older generation of American romantic landscape painters. Albert Bierstadt, born in… Henry Ossawa Tanner , Tanner, Henry Ossawa 1859-1937 Painter, photographer At the beginning of the twentieth century, Henry Ossawa Tanner was highly regarded in Europe and… Painting , painting, direct application of pigment to a surface to produce by tones of color or of light and dark some representation or decorative arrangement… Frank Kupka , Frantisek Kupka (1871-1957) was a Czech painter and illustrator who lived most of his life in Paris. He was one of the first artists to paint abstrac…